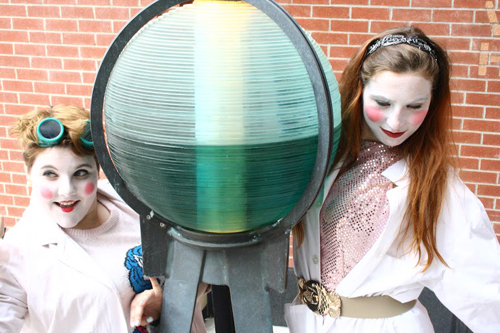 Waiting for Alonzo (B+)
To suggest this play is “Beckett meets the Bechdel Test” doesn’t do the innovative story and understated moments in it justice. While there are some tired critiques of a beauty-obsessed culture, the strength of this production are its characters and their performers: Victoria Urquhart holds our attention as a vain genius who refuses to allow logic interrupt her sense of purpose, Kevin Chew provides a comforting sweetness as the voice of reason who’d rather be dancing, and Hayley Malouin sparkles as the flawed but faithful sidekick whose occasional bizarre pearls of wisdom creep up in the script to make sure we aren’t taking anything too seriously. If the trio’s purpose had been to lovingly deliver a mess instead of hamfistedly delivering a message, I’d call it a masterpiece.

Heartbeat and Other Ways To Say I Love You (B)
This parable of making perogies and modifying priorities follows a workaholic on her journey of Scrooge-like self-awareness with some wisecracking interjections from her tour guide, the legendary Baba Yaga. It’s a story we’ve all heard before, but it bears repeating. Tanya Elchuk steals the show as the (apparently misunderstood) icon of Slavic folklore. And, after the curtain call, there are things to nibble literally and figuratively – what’s not to love about that?

Ninety (B-)
When I sat down to view Naked Goddess Productions’ presentation of Joanna Murray-Smith’s Ninety in its ninety minute slot, I had braced myself for “an exploration of love, loss, and the frenzied passing of time”. The frenzy I witnessed was over in seventy-five minutes. I appreciate the festival’s commitment to script scheduling and my sympathies go out to companies trying to stay within their allotted slot. But the real-time script needs every one of those minutes. Perhaps there have been tweaks since the performance I watched – I hope there have. Too many moments ended before they could be inhabited. I hope other audiences see Nicole Fairbairn’s impressively performed character arc unhurried. William MacDonald’s articulation and emotional range were certainly not helped by the Howard-Hawks-esque pace. There’s a lot going on in this show – I’m not sure how much I missed by blinking.

Hamlet…A Puppet Epic! (C)
Shakey-Shake and Friends returns to FringeKids this year with the ambitious goal of presenting William Shakespeare’s The Tragedy of Hamlet, Prince of Denmark as something lighthearted for a young audience. And, while they manage to entertain without skimping on the body count, something about the adaptation goes a little too light on the heart of the matter. The highly-talented cast deftly handles the classic’s plot points, but they pratfall over themselves to anesthetize every moment of a young audience’s experience. This production’s funny moments are funny, its scary moments are funny, and its sad moments are funny. Murther, grief, vengeance, and denial are punchlines. And, instead of making any choices in interpreting what is arguably The Bard’s most famous soliloquy, the adaptation consciously inserts moments to suggest “To be or not to be” can mean whatever you think it means. I’d contend that blissfully ignoring all contextual clues is as great a theatre crime as suggesting Juliet’s “wherefore” on her balcony means “where”, but I digress. I’m not, after all, the target audience. The kids at the Fringe are. Kids who are expected to pick up on Shakey-Shake and Friends’ references to The Lion King and The Little Mermaid, which are both children’s films that include unfiltered scary moments and sad moments. Knowing that, I can think of no good reason why Shakey-Shake and Friends chose to sell both their theatrical medium and their young audience short.