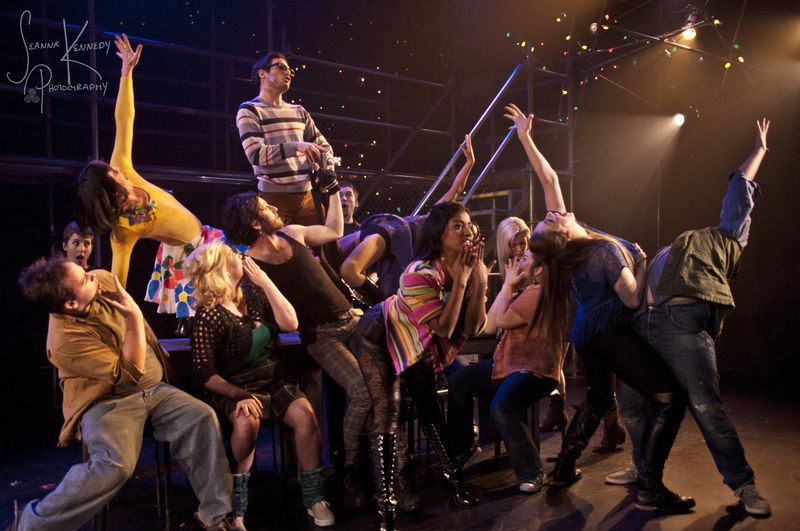 The Lower Ossington Theatre’s current production of the beloved rock musical Rent will come to an end on June 2nd, the producers opting out of a second extension in favour of an early return for LOT mainstay Avenue Q. The decision must be a purely commercial one since there is almost no textual argument to be made for Avenue Q‘s superiority to Rent as a piece of artistic output (Avenue Q– once refreshing if not revolutionary- is now so dated that it inspires mostly groans instead of laughs). But The LOT’s Q is solid and likable (its biggest flaw being the text itself) so as a commercial enterprise, I understand wanting to bring it back for what feels like the 18th time. Besides, they’ve already paid for the puppets.

Perhaps the biggest mistake the over-charging and under-paying company made in reviving Rent from its Spring 2012 incarnation (aside from chronically over-charging and under-paying) was the decision to approach it with the same artistic attitude that they’ve been using (and re-using, and re-using) with Avenue Q. There is maximum one way to stage and perform Avenue Q– it’s simple, it’s broad, it doesn’t make much sense any other way. So as The LOT recasts and remounts the show, each new actor can slot into exactly the place vacated by their predecessor (some of the actors even flit seamlessly between tracks, the standout being Stephen Amon whom I’ve seen play Princeton, Rod, Nicky and a Bad Idea Bear; and I hear he also does Trekkie). No direction really required. But even if you’re adhering lazily closely to the original Broadway staging and character interpretations, Rent needs direction. It especially needs direction as staged in 2013 Toronto instead of 1994 New York where the problems, themes and references hit a lot more obviously close to the audience’s home. But instead of directing the current production of Rent onstage at The Lower Ossington Theatre, Seanna Kennedy seems to have unceremoniously dropped a cast of mostly new performers into her also-not-thoughtfully-directed previous staging.

This set of actors brings an entirely different set of strengths and weaknesses to the same show, highlighting how limiting, conventional and sometimes just honestly awkward Kennedy’s staging can be. Take “Light My Candle”, for instance. Here you have a stronger, more stoic Roger and a tougher, sexier Mimi, but they engage in the same meandering blocking as last year’s softer and sweeter actors. It’s as if they’re walking in circles seemingly at random, crossing downstage left because Kennedy was in a downstage left kind of mood that day in rehearsal. Perhaps the most ridiculous moment in the production comes in “What You Own” when the blocking literalizes Mark and Roger’s metaphorical claims of hearing Angel and seeing Mimi by having Angel and Mimi actually walk across the stage (please note: Angel is, at this point, dead). Sadly, this pedestrian idea comes amidst one of the only moments that notably diverges from the pre-ordained Original Broadway-ness of everything else (during “What You Own” the stage fills with busy, anonymous passerby- a choice I actually really liked for its loneliness… until dead Angel showed up). It’s difficult to tell if this was a choreographic or directorial decision but, either way, it’s a director’s job to act as an outside eye and veto   whatever terrible ideas are trying to sneak their way into the show.

But at least Kennedy’s not alone in dropping the ball. Mikael Kangas’ lighting design is so ridiculously showy that entire scenes get lost in a sea of moody purples and blues. At the climax of Act One, in the middle of the show-stopping “La Vie Boheme”, our trusty narrator Mark pauses the action to point out Roger and Mimi’s “small and lovely kiss”. But all the audience sees is purple and a bit of a halo outline behind Roger’s head from the light that’s positioned too low to actually light the kiss.

But the production issues don’t stop there. True to LOT form, the soundboard is all over the place- too quiet on Angel, too loud on Mimi, WAY too loud on Roger.  This space is completely inappropriate for musical theatre and the poor sound technician always pays the price, trying to balance the voices over the band without blowing out the audience’s eardrums when sudden belting comes in. This process is not helped by Robert Wilkinson’s boldly obnoxious musical direction, filled with inappropriately placed belts, an off-putting amount of riffing, and the odd moment when Collins seems to be delivering rap-like spoken word poetry instead of lines. I saw the show twice (partly because I caught an understudy the first time and partly because the first performance I saw was a severely troubled matinee with a sloppy pit and almost no energy in the ensemble), the pit had countless fumbles with the iconic score even the second time around.

I even disliked the choreography, which pains me to say considering what a fan I am of Miles Faber. I think he fell into the all-too-common trap of over-choreographing a piece that’s designed to be dance-light. A killer “Tango Maureen” and some sassy gallivanting on “La Vie Boheme” is really all that’s required but Faber went all out until his great moments (Mimi’s dramatic slide down some scaffolding, the joyful mood of his “Santa Fe” choreo) were overshadowed by a feeling of artifice. On the plus side, Michael Galloro’s set is appropriately functional and Tarah Kennedy’s costumes hit the mark more than a few times. Mimi’s girlish getup in “Light My Candle” and Joanne’s overdone conservative dowdiness rubbed me the wrong way but this Kennedy gets extra points for that pink triangle t-shirt in the ensemble, Maureen’s boots, and Mimi’s epic blue pants, among other things.

I know I basically just slammed everything there is to slam on the creative and technical side of things, but I promise this production isn’t nearly as terrible as it sounds. Because, when it comes down to it, Rent lives or dies on the backs of the actors, and this group is fairly strong, topping last year’s ensemble with a few key improvements. The returning players are Angel and Joanne, two of 2012’s better performers. Phil Skala seems to be tiring- his Angel swagger and falsetto not quite as sharp as they were last time around- but Jacqueline Martin hasn’t lost a step, bringing back her no-nonsense Joanne and the rafters-shaking voice that comes with her. The major difference is that this time she’s matched by a Maureen who’s almost as dynamic as she is, if not more. Brittany Scott is solid throughout Act Two but holy hell if she doesn’t come out with a bang and completely shake up Act One with the best “Over the Moon” I’ve ever seen. She departs from Idina Menzel’s original in quirky, unexpected ways within a song that’s so nutty it’s hard to really make your own. And she gets the audience to “moo”, which is the real mark of success.

This is actually a rare production in which all the women are scene-stealers, not just Maureen. In the most impressive character work of the show, Shruti Kothari actually made me like Mimi (which I never do). She has strong enough vocals to not be completely overshadowed by her belting comrades and carries that strength over into something I would actually dare to call character interpretation (something very few people bother to do once they’re cast in Rent). Kothari is a tiny person with a massive stage presence and she’s not afraid to let her Mimi own both of those things- she’s fiery and defiant where most Mimis aren’t but the sexpot and the waif battle it out in Act Two as she attacks the damningly repetitive “Without You” and her heartbreaking eulogy for Angel with real acting chops. She makes strong choices in quiet moments (touching Roger’s knee while they watch Maureen’s performance, tugging at her sleeves to conceal track marks) and develops strong chemistry with her sexy Roger.

For his part, Andrew Ball is the standout amongst the men. He has at least some of the hard edge and all of the intensity that’s so difficult to find in a young Roger who’ll be able to do the vocals without ruining his pipes, and he actually plays his prop guitar (something that is shockingly rare). He had trouble finding some of his notes the second time I saw the show but was the only (yes, only) performer who hit it out of the park during that dreadful matinee. He’s the biggest victim of the aforementioned obnoxious riffing (seriously, it’s out of control) but at least his voice is strong enough to make the obnoxious riffing sound really good.

The other particularly strong male singer is Cesar Erba, though he poses a fascinating conundrum for Rent purists. His voice is absolutely beautiful (and he’s a surprisingly great dancer, which is a nice bonus in a Collins), but he’s a tenor. That makes his “Santa Fe” one of the best I’ve ever heard, but it means that the more iconic Collins vocals like, most notably, “I’ll Cover You (Reprise)” sound shockingly different.

I personally missed the bass in both that number and some of the blending parts with other singers, but I don’t think it would have bothered me at all if my ears weren’t so used to Jesse L. Martin. An argument could be made that Collins’ low vocals ground him in a group full of high belters and speak-singers but I think Erba is good enough to negate that and come out simply as refreshing.

The weaker members of the main cast are James Meltz and Jeffrey Bowers, though neither is terrible. Meltz is a fine Mark, though perhaps a bit too flamboyant to fit the character’s chronic observer role. Bowers is an issue of interpretation. I appreciated how he seemed to really commit to each moment in a cast (and especially an ensemble) that can sometimes appear to be phoning it in a bit. But his Benny is out-and-out villainous, a choice that doesn’t really serve him or the characters who voluntarily interact with him (especially Mimi) particularly well. His voice is pretty but there’s too much metaphorical moustache twirling for his redeeming moments to shine effectively through.

As for the smaller roles, Jessiqua Clausen is funny and original as Mark’s mom and Josh Smith achieves the remarkable feat of making the squeegee kid a thoroughly compelling character (I don’t know what he’s doing that’s so special but damnit if I don’t care that this guy be able to make his “honest living, man!”). A Marxist approach to the “Seasons of Love” solos divvies up the glory across multiple singers, making room for strong vocalists like Ann Paula Bautista to stand out beyond the few laughs she gets as the angry homeless lady. There doesn’t seem to be a weak singer in the cast and, for the most part, we hear from everyone, even the underrated Mark Willett getting his chance to shine as the beautiful “Will I” soloist. I wish the ensemble pulsed with more of the frenetic energy that I associate with group numbers like “Rent” and “La Vie Boheme” but it’s a long run and they most definitely improved when I returned for an evening show.

What drives me crazy about The LOT’s current version of Rent is that these kids get it, and they deserve better. They’re across the board talented and they bring interesting and unique elements to their characters just by being interesting and unique performers. With stronger direction, those qualities could have brought out a more inventive and exhilarating Rent. Something that differed from the standard by more than just a tenor Collins and bizarre ghost Angel blocking. Something that maybe could have drawn audiences big enough to keep the run going and Avenue Q at bay.