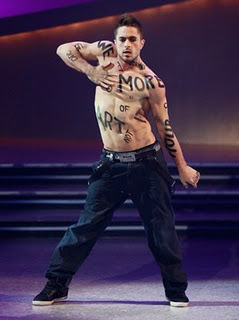 The Almost Final Deal With The Dancing

After an intense marathon of sitting and watching other people dance, I’m left just a week away from the finale of So You Think You Can Dance Canada, feeling shocked, disappointed, impressed and proud all at the same time. Sadly I will not be able to report on the finale until late December but I’ll share my thoughts for now.

Where did I leave off last time? Oh yes, the eliminations of Tamina and Joey. The next week Caroline and Jesse followed suit, marking the last departure of the dancers I didn’t care about. The week that followed hurt my heart a bit; it was time for Kaitlyn and Danny to go but Lara and Francis were the final 2 cut before the top 10 instead. One of my early favourites, Francis had only gotten better with Natalli as a partner and Lara was just as good a dancer as Kaitlyn and oodles more endearing. Looking back though, (tour logistics aside) it doesn’t really matter that much. Kaitlyn and Danny were both eliminated the next week, a couple extra days for Francis and Lara wouldn’t have made a huge difference.

It was the week after Kaitlyn and Danny finally left that threw off the endgame. That was the week that the voters lost their minds. Vincent danced with Natalli, brilliantly. Arassay danced with Izaak, her least impressive performance to date but out dancing her partner 10 to 1. Vincent and Arassay were cut. Vincent: both perhaps the best technical dancer on the stage and a lovely and engaging person, and Arassay: a crowd favourite and front runner with technique, charm and fire. I’ll concede that it would have been sad no matter which girl went. All 4 of the top girls were magnificent dancers. It was more shock than anything else that Arassay (one of my consistent picks for top 4) was cut without ever having been in the bottom 3 while Lisa, a bottom 3 mainstay, stayed.

The second cut of that week was the most brutal of the competition however. Exiting at exactly the same time as technical wizard Will did in the massive upset on the US version this summer, Vincent took a top 8 finish while the charming yet inconsistent Izaak sailed into the top 6. I was a big Izaak fan, don’t get me wrong. He was incredibly charming, worked very hard and really could dance; just not as well as Vincent. My issue here is not actually disappointment that Vincent didn’t make it as far as I was sure he would, it’s more about Izaak. Like US season 4’s Mark (another favourite of mine) before him, Izaak had to continue on the show, knowing that there were millions of people who thought that someone else deserved to be there more than him. It wasn’t his fault that people voted for him over Vincent, but even I found myself mad at him and worried that he may squeeze into the top 4. Izaak’s charisma pushed him further than he should have gone in the competition; which means that he left, a week late, loaded with undeserved guilt and resentment, a fate such a sweet kid really didn’t deserve.

It’s probably clear by now that this week Lisa and Izaak went home (even though Lisa had one of her best weeks ever on the show), leaving a final 4 of Nico (predictable and deserved), Natalli (exciting and inspiring), Miles (unexpected yet not unwelcome) and Allie (somewhat expected and uninteresting).

I won’t belabour your with descriptions of all my favourite routines, odes to Nico, comments about Miles’ abs and smile or rants about how fantastic Natalli is. If I finally get YouTube to work I’ll post videos that’ll help you to infer those things yourself.

I will, however, say the following short things:

1) When this show began I loved its Canadian-ness but as the weeks wear on and Tre and Jean Marc become increasingly pun-ish, it sure is a breath of fresh air to have some of the Americans arrive on the scene. The judging panel was an entirely new place the week that Mia Michaels and Dan Karaty stopped by to impart wisdom. I’ve never liked Dan so much as when he refused to put the dancers on some form of metaphorical transportation and just complimented them instead.

2) That said, Canada’s got some great talent for that panel. Tre and Jean Marc may be driving me crazy by this point but Rex Harrington was a ball and some of those great Canadian choreographers make fantastic judges as well.

3) “Those fantastic Canadian choreographers” are Sean Cheesman, Melissa Williams, Luther Brown and (my favourite) Blake McGrath. Sean and Melissa create consistently good material and are clearly inspiring and supportive and Luther never totally disappoints (hmm, Paul Becker and Crocodile Rock ring any bells?) though the show could definitely use a little (or big) dose of Tabitha and Napoleon to get it out of its hip hop slump. But it’s Blake who really steals the show.

Though somewhat overbearing on the judging panel, Blake the choreographer is a God-send for any dancer. He not only always creates interesting and entertaining routines, he sets high standards and teaches the dancers how to reach them. Week after week dancers have emerged from Blake bootcamp with just that much more emotion, that much sharper technique or hitting it just that much harder. He’s Canada’s Mia.

4) And in the hands of those fantastic choreographers are some fantastic dancers. I realized 3 episodes ago, while hoping that Leah would announce that it was a “non-elimination round” (ala Amazing Race) so we wouldn’t have to lose any of the fantastic top 8, that Canada’s season 1 cast may just be my favourite in SYTYCD history. US season 3 may be able to compete, but no other season comes anywhere close. I definitely love Natalli more than any female dancer (sorry Katee), an interesting development since I began the season not liking her at all; Nico is second only to Danny Tidwell; Miles outshines any truly training-less popper before him; Vincent’s technique is easily Will’s equal; Izaak is the underdog for the ages and Lisa’s intensity and professionalism is unparalleled. This cast has more fire, more drive and more charisma than any I’ve ever seen, they’re irresistible, and they can REALLY dance.

5) Oh, and just in case I’ve somehow neglected to make this clear: Nico’s got this! He’s uncompromisingly popular, a flawless technician, a reliable dance partner, a passionate artist, an endearing competitor and a memorable character. I’d just like to remind you all, I totally called it for “the Montreal bad boy” long before I even knew his name.