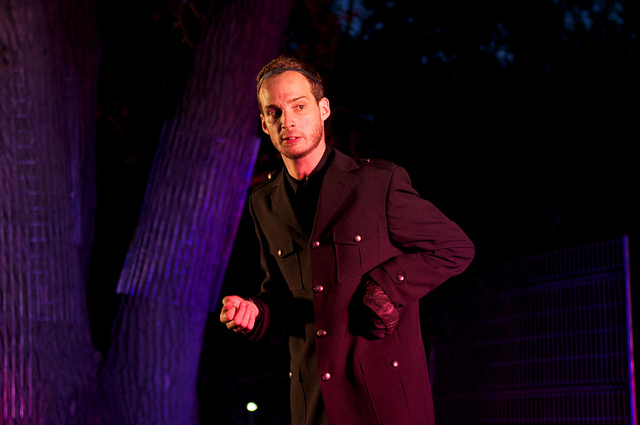 On Stage in TO: Summer Shakespeare

There were 9 Shakespeare productions happening in and around Toronto this summer (that I know of). I missed only one of them (Mother Nature really didn’t want me to see The Taming of the Shrew, even though it was directed by one of my favourite theatre artists in town!). The best was Shakespeare Bash’d’s no-frills Much Ado About Nothing at the Toronto Fringe Festival. The other best productions all took place outdoors and came from three incredibly different companies. Here they’re listed in order of awesomeness.

Humber River Shakespeare: As You Like It
I’m going to start referring to this play as As I Like It. Because I just Always like it. Always. Without fail. Even a bad production, which this wasn’t. As You Like It has more interesting characters than almost any other Shakespearean text. It has a true heroine who drives her own story. It can be wildly funny but is also chock full of dramatic potential. As You Like It is simply one of my favourite things in the world. And the always reliable Humber River Shakespeare did it complete justice. Director Kevin Hammond has always had an excellent sense of space, adapting to make full use of whatever non-theatre the company has at their disposal for that performance. This year I caught up with the touring players at one of their prettiest stops- Old Mill.

For this production, Hammond and co. have assembled a pretty uniformly strong ensemble (though Hammond himself proves a far better director than actor when he takes on the tricky role of Oliver). The play kicks off with a merry company song that, paired with the epilogue I always think should be cut and a clever little pre-intermission sonnet, forms a sort of frame around the story. Here it’s amusing to try and pick out the characters before they officially launch into the text (Spencer Robson- handsome and charismatic, obviously Orlando; Christopher Fowler- sly and witty, a clear choice for Touchstone). My attention was quickly caught by the dynamic Lauren Toffan so I was surprised, when the play began, to find her playing Celia rather than the larger role of Rosalind. Since Lisa Hamalainen proves a plenty capable Rosalind, the casting of a standout actress as the oft-forgotten Celia (my favourite character) made me irrevocably happy. Toffan and Hamalainen form a lovely sisterly bond that sells the heart of the story and they lead an excellent ensemble that includes Fowler’s wonderfully snarky Touchstone, Christopher Kelk’s heartfelt and funny Adam (one of the best I’ve seen), a scene-stealing Andrew Knowlton in a host of roles but most notably the adorably lovelorn Silvius (oh how I love a good Silvius!) and Hugh Barnett’s warm Duke Ferdinand (though I was expecting more from his sinister Duke Frederick). Artistic Producer Sara Moyle pulls startling double duty as an austere Jaques and daffier-than-even-the-usual Audrey but, most surprisingly, it’s Robson’s Orlando who I found most memorable.

Earlier in this review I admitted to somewhat dismissively assuming Robson would play Orlando on the basis of his being handsome and charismatic (harsh criticism, I know), because 9 out of 10 times those two words entirely encapsulate that character. But Robson wasn’t just those two things. He took up a character clearly given to him because he is handsome and charismatic and made him interesting for what might possibly be the first time ever. He played the humiliation behind how his brother’s treated him his whole life and the familial pride that drives so many of his actions. He invested in the high stakes when searching for food to save Adam and gave that relationship a real sense of loyalty and tenderness. But my favourite thing he did (and this may be credited to Robson or Hammond, it’s hard to tell) was grab hold of the gift of awkwardness Shakespeare gives Orlando but few actors ever bother to unwrap. Lines like “Can I not say, I thank you?” are scene-stealingly funny, he takes exuberant pride in his bad poetry, and, for the first time, it dawned on me that Orlando may be handsome and charismatic but that doesn’t mean he’s not terrified of women (no wonder he’s so much more at ease with Ganymede than Rosalind). Orlando for me has always been a sort of Romeo-light character who has far more lines than he’s worth (see also Ferdinand, Lysander and Lucentio) but, thanks to one fairly excellent Shakespeare in the Park, I finally get him.

Shakespeare in the Ruff: Richard III
Richard III is an awfully daunting text to do in a park. Usually the space between two big trees is where you stage As You Like It or A Midsummer Night’s Dream (or Two Gents, as the Ruffians did last year). Arguably the darkest of all the history plays with a giant, confusing cast of characters, a host of murders and an on-stage war? That’s ambitious. But Shakespeare in the Ruff found the perfect Richard and you don’t waste a perfect Richard. Alex McCooeye is about 7 feet tall with spider-like limbs (a fascinatingly unconventional frame within which to play Richard’s deformity) and the sort of contortionate face that’s an invaluable tool in both manipulation and comedy. He gives Richard an air of awkward strangeness and lays on the ick factor with a heavy hand for the grotesque seduction scenes. But there’s something strangely entrancing about his presence that completely sells what usually feels like a highly unlikely rise to power. I couldn’t take my eyes off him (nor did I want to, every time he snuck out of view an ominous air of impending doom descended over the audience- this is a man in need of supervision). The creepy, enchanting, grotesque, unsettling vibe of McCooeye’s Richard is only made more intense by how pointedly funny the performance is. McCooeye and director Diane D’Aquila mine the humour from the text with deft hands, a quirky line delivery or look to the audience punctuating moments that most productions race by.

There’s room for such an expansive performance from the diabolical leading man in large part because of the judicious doctoring that the text has undergone (a mark of the newly revamped Shakespeare in the Ruff is their scholarly textual treatments, incorporating passages from other plays and trimming every ounce of fat). The bold removal of Margaret is the only startling change to the text (which I didn’t mind at all) but it somehow still rollicks along and comes in at around 2 hours with no intermission. The incredibly tricky fifth act is handled with great directorial care by D’Aquila (the ghostly dream sequence is particularly effective, as is the night-vision portrait of modern warfare, though the prop guns are laughable). Smart modernization lets cellphones take the place of messengers while also adding a sense of urgency and taking the pressure off the audience’s knowledge of British history. Jacklyn Francis’ Elizabeth is Dramatic with a capital D (why is she always running?) but Canadian Shakespeare’s having a leading lady problem across the board in tragedies this year so that’s a complaint for another day. The rest of the cast ranges from acceptable (Charlie Gould’s flighty Lady Anne) to surprising (Simon Bracken makes Hastings a standout character with strong comedic choices) to powerful (Artistic Director Brendan McMurtry-Howlett’s strapping Richmond has the sort of charming soldierliness that makes you want to hand him the throne of England), my only real complaint being that more thought should have been put into costuming the double-cast actors to differentiate characters.

I’m always impressed when a small company can pull off a high-demand show in a relentlessly low-fi situation. With a laser-sharp focus on the man whose story it is, Shakespeare in the Ruff accomplishes just that.

Dream in High Park: Macbeth
I always look forward to CanStage’s High Park production even if it’s been years since said production was really extraordinary. The experience of Dream (which I think they’ve technically renamed “Shakespeare in High Park” because “Dream” was confusing people) is reliably lovely with comfortable amphitheatre seating, short running times, and actors who know how to project for the people who made the rookie move of showing up for curtain instead of 2 hours earlier to get seats and eat a picnic. There are a few recent changes to the Dream setup, though, that are fairly off-putting and affect the list I just mentioned. The first is that the actors now all have personal mics, creating a weird artificial, distancing effect that’s very un-Shakespeare in the Park. The second is that there’s a new priority seating system that undermines the entire pay-what-you-can/first-come-first-serve foundations of the tradition. Blasphemy! (or another word that’s less intense but still conveys strong indignation towards such unnecessary and unlikeable changes).

As for the production itself, it boasts a harsh cut (90 minutes!), very smart double casting (the drunk Porter lays passed out onstage until he can say the Old Man’s lines), interesting directorial ideas involving fog machines, trap doors and puppets (all things just crazy enough to actually work), a Malcolm (Greg Gale) who makes the bold move to be funny (at least in Act I), a Lady M who is all consonants (and is severely suffering from the Shakespearean Leading Lady syndrome that has turned many of the Bard’s tragic women into inhuman drama machines this year), Mina James as a standup tough guy Lennox, and a completely unnoteworthy Macbeth.

The production, despite some redeeming elements, seems to be a pretty generic wash, if it weren’t for one thing. Director Ker Wells puts together an idea that in retrospect seems so obvious but, through dozens of productions, I’d never seen before: Ross (Thomas Olajide) is in cahoots the entire time! It makes perfect sense- he’s the perpetual bearer of bad news, always finds his way to the scene of the crime, and seems to be in the loop in ways that comparable characters (like, say, Lennox) are not. Throw him some choice Messenger and Murderer lines in addition to his own and have Olajibe add some vengeful snark into his delivery and you’ve got yourself a fascinating evil cohort where once there was an inconsequential Thane. If given the choice (damn you, rain!), I would have much rather seen Ted Witzel’s (surely cutting edge and intellectually intriguing) take on The Taming of the Shrew over a fairly conventional Macbeth, but at least Ross made my consolation prize interesting.