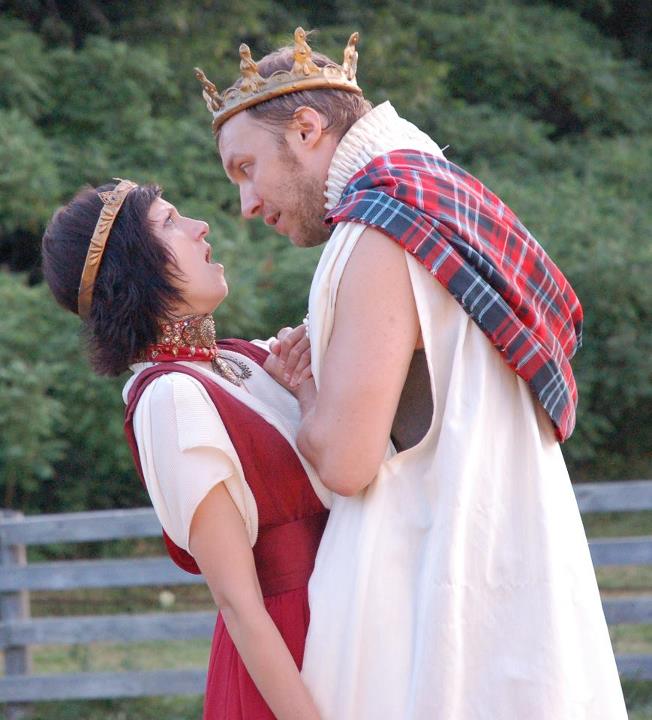 I’ve always liked Humber River Shakespeare, mostly because I always like Shakespeare- anywhere, in any form, by any company- but their 2012 Macbeth is by far the best thing I’ve ever seen from them. It helps that I attended their very first (and only, this season) show at Casa Loma. A relatively bare-bones company, Humber River productions are usually outdoors (because they tour along the banks of the Humber River, hence the name) with a simple set, noise distractions and a grumpy grass-strewn audience. The fact that they consistently make it work in outdoor theatre conditions that aren’t exactly High Park has always been impressive, but for the sake of the experience I couldn’t recommend their Casa Loma show more highly. Just as A Midsummer Night’s Dream and As You Like It thrive when set against real trees, Macbeth belongs in a castle, so Casa Loma gives Humber River a multi-million dollar boost in set design just by letting them in the doors. The company adds a small, moss-covered platform and some flags to their surroundings but Casa Loma itself sets the tone with its history-laden opulence and silent, echoing halls. Standout director Kevin Hammond uses the space cleverly (the apparitions are voiced from an upper balcony, making them seem non-corporeal) and less of the behind-the-scenes action is noticeable than in most Humber River Productions (I still caught the occasional bottle of stage blood, but I’m sure most of the audience did not).

Hammond is a great director and he leads his cast through a production that is at once a traditional Scottish Play and a new angle on the oft-produced text. The play begins with a ritual of sorts and the haunting musical wails of the three witches (Kanika Ambrose, in particular, has a uniquely gorgeous tone). Then some men enter but it’s not Banquo and Mackers jumping into  1.3 early, it’s three anonymous soldiers who speak to the witches in their own language and seek their help in winning the forthcoming battle. Our anti-hero then quickly swoops in and destroys all three men- the fascinating implication being that deference to the witches leads to assumed victory and inevitable defeat. It’s a fascinating add-in (and Hammond’s biggest interpretational moment by far) though it comes with the great risk of adding words to Shakespeare’s. A bit more restraint and the concept could have come across without upsetting the purists and confusing the people who came in clutching their Wikipedia printout, but I really liked it in concept.

Another interesting element of the opening is the identity of the three men being killed and the foreshadowing implications of that. Humber River is a small company and each actor plays many roles (Steve Coombes does Seven!). There are times when that’s not particularly helpful (like when Macduff is at the banquet where the others observe ‘hm, Macduff didn’t show up, how rude’), but sometimes it creates a fascinating effect. For example, the three men Macbeth kills at the beginning are the same actors who will later play Duncan, Banquo and Macduff (two of whom Macbeth brutally murders or has murdered); the Porter is played by Coombes, who has just been stabbed to death offstage as Duncan, giving fascinating resonance to the line “Wake Duncan with thy knocking! I would thou couldst” that comes right before the Porter enters to answer the knocking at the gate. One of my favourite bits of double casting is that the recently dead Lady Macbeth re-enters to die again as Young Siward. Just after Macbeth laments his inability to properly grieve his wife’s death (“she should have died hereafter”, he doesn’t have time now, he’s fighting a war!), he has to literally kill her again himself- quickly and with little thought. I’m sure some of the insightful doubling was a happy coincidence, but Hammond is a thoughtful enough director that I’m sure at least some of it was in the plan. That said, the costumes (while excellently minimalist and modern with great nods to setting with bits of tartan here and there) need more differentiation if the audience is going to keep everyone straight when they’re playing up to seven roles in one show.

The cast is a mixed bag led by Eli Ham who might literally be the best Mackers I’ve ever seen. No, I am not exaggerating. It’s a really tough role to capture complexly- the temptation being to make him a simplistic tyrant or a weak victim of his wife’s manipulations. Ham does neither of those things. His Macbeth is a soldier in the proper intimidatingly physical way. He has broad shoulders and a bad temper and a tendency to throw his wife around (more often in service of sex than violence, though both definitely come up) but he also has an incredibly strong sense of right and wrong (at least a strong sense on the grand scale of people who are about to commit murder). Ham captures the smart skepticism but creeping ambition of Macbeth’s first encounter with the witches and his late-act-one/early-act-two scenes around the murder of Duncan are rife with terror, guilt and just enough self-loathing to curb any audience member’s desire to pull away from him and invest in the non-murderous characters instead. His “Tomorrow and tomorrow and tomorrow” is breathtaking (following the McKellen rule of emphasis on “and” instead of “tomorrow”) and the relationship with Lady M that precedes said climactic speech is filled with the troublingly sexy co-dependence that always leads to interesting places by the time they start to pull away from each other in act three. Eli Ham’s principled, manic, spiralling soldier of a Macbeth is utterly compelling at every turn, making this a rare time when the lead is actually a production’s star.

The others can’t quite keep up with Ham but achieve varying degrees of success nonetheless. Humber River’s Artistic Producer and usual leading lady Sara Moyle takes the surprising role of Malcolm, lending the runaway prince/future king the hard-edged intensity that has become her staple. A tough-as-nails Malcolm is an interesting contrast to a Macduff who is softer than average. Neil Silcox has the potential to be a really great Macduff with his handsome but kind face, low voice and strong build, but he’s not quite there yet. Each time I see Silcox he gets better but he’s still a little stilted on stage, a little too practiced. He’s at his best in Macduff’s loveliest and tenderest moment- 4.3’s “I must also feel it like a man”- but otherwise not comfortably honest enough to be the convincing hero. Shannon Currie, similarly, has an excellent moment or two but feels too stage-y to be believed. That’s an occupational hazard with Lady Macbeth since, if Macbeth is being played at least semi-sensible and non-psychopathic, she has to be ambitious to the point of delirium. I think Currie crosses the line all the way to Crazy, but the audience at large seemed to respond to her strong choices so I’m putting Lady M down to a matter of taste. Steve Coombes isn’t a particularly memorable Duncan though I was intrigued by his Siward’s refusal to bow to Malcolm at the end of the battle. David Sklar is a fine Banquo and a particularly good “Ghost of Banquo” but he was really hard on Fleance which made me like him a whole lot less. How can you be hard on Fleance? As played by Kanika Ambrose, Fleance is an adorable scamp (as is Sklar, actually, when playing Macduff’s son later on). Ambrose in general was my favourite non-Ham cast member, particularly because of her soulful Lady Macduff (along with Fleance and her musically fascinating turn as Witch #1).

The cast, while inconsistent, fares decently next to Ham but he’s in another league from “so foul and fair” to his well-staged beheading (the fights are all excellent, speaking of, particularly Young Siward’s demise and the final Mackers-Macduff showdown). Armed with a superb leading man and the great Kevin Hammond at the helm, Humber River Shakespeare was at their best when they were at Casa Loma.