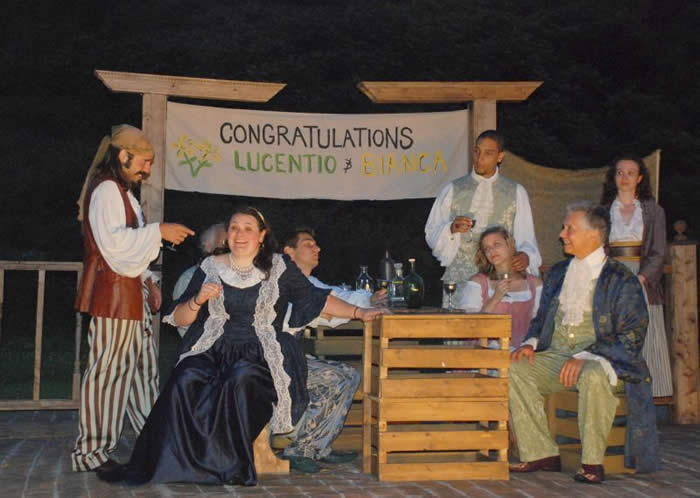 I love Toronto. There are many many reasons for this, not the least of which is the independent theatre scene. Every week it seems I stumble upon another company dedicated to doing theatre their way, whatever way that may be. Often small, rarely well-funded and often brimming with talent, Toronto’s many many theatre companies are one of the great delights of running a site like this. Everyone knows to go see the Mirvish shows, I don’t need to tout Stratford (even though I do), CanStage and Soulpepper are obvious. I like it best when I go out to support a friend who’s producing a show and discover a pair of upstarts running their own company just a few years out of high school (like Cawrk Productions). I take great joy from getting a facebook invite from an old classmate telling me about a BSS alum tackling one of the hardest pieces in the musical theatre canon (Vetoed Productions). I love it when an alternative company sends me their press release and convinces me to love a genre of theatre I’ve never even liked before (Red Light District) or when an underdog youth company pulls out a truly inspiring piece of work (No Strings Theatre). And I really like writing about those things, in the hopes that maybe you’ll discover these companies too.

So when a young actress asks me to review her show, if I possibly can, you can bet your butt I’ll be there.

Such was the case when I got an email from Jessica Moss, a spirited and empathetic performer who seems to be everywhere these days, appearing in no fewer than 3 My Theatre-reviewed productions this summer (The Queens, The Witch of Edmonton and The Taming of the Shrew). Ms. Moss told me about a company I didn’t know existed and in doing so she’s earned them a returning customer for many seasons to come.

I saw The Humber River Shakespeare Company’s touring production of The Taming of the Shrew at its final performance of the summer, unfortunately not early enough to promote the show during its run. And it may have taken me forever to finally write this review, apologies to the cast and crew, but rest assured that is no reflection on how good the production I saw was.

First of all, the very nature of the show was endearing. I’m a big believer in low maintenance Shakespeare and these capable actors made a lot out of very little as they toured this outdoor production throughout July. No set, few props and delightfully anachronistic costumes gave the production a sense of rag tag fun that paired excellently with the induction that frames the story of Kate and Petruchio as a play-within-a-play. Director Kevin Hammond navigated the somewhat polarizing text well and the production rarely lagged.

The performances were a bit of a mishmash however. Sara Moyle’s Kate was smart and fun, if a little gruff, and Hugh Barnett’s Petruchio’s was, well, a pirate, which was distracting; but he was otherwise pretty okay. Megan Poole’s Bianca fell prey to the common plague of ingenue-iness but Paula Schultz’s delightful female Tranio thoroughly counteracted that. Jessica Moss was in top form with boundless energy as the goofy Grumio, her 110% character commitment stealing many scenes. A real delight (and surprise) of the production was Kaleb Alexander as Lucentio. An old friend of mine whom I haven’t seen in years, Alexander was as charming as ever in Taming, which is to say very very charming. He brought tons of charisma to the often-dull character of the swoony lover, actually making the love story somewhat believable, something new to the play.

In an uneven production of an oft-problematic play, The Humber River Shakespeare Company managed to put on a thoroughly entertaining piece. It had some moments of real clarity, a couple great laughs and a heart of gold. I’m so glad I know they exist.