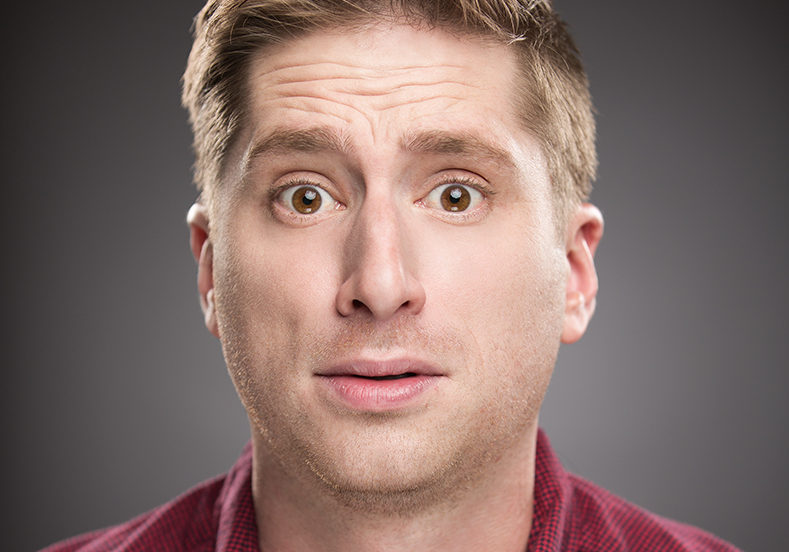 Peter n’ Chris (Peter Carlone and Chris Wilson) is arguably the most popular Fringe Festival act in the country, touring the cross-Canada circuit pretty much every year and winning all the Best of Fest & Patron’s Pick awards. This year they pulled double duty during the Toronto festival by pairing their own Outstanding Sketch/Improv Performance-nominated show Peter vs. Chris with roles in Kat Sandler’s complex alien abduction comedy Bright Lights (Outstanding Ensemble & Production). We caught up with the duo’s Toronto-based member Chris Wilson for some insight into both shows.

For more from Chris, you should also check out the episode of our MyEntWorld Podcast he did with Colin Munch recapping the latest Simpsons season premiere. It starts out very funny then gets intriguingly existential as the two comedians wonder what happened to the show that inspired them.

How did you meet Peter and get started as “Peter n’ Chris”?
We met in the acting program at the University of Victoria. Peter had longer hair reminiscent of Tom Cruise in The Last Samurai, and I had hair like I do now. The hair has nothing to do with how we met, I just wanted to put that in there. In 4th year Acting Class an assignment was to write what was basically a 7 minute one man show with multiple characters, etc….We helped each other write each other’s and that’s how we started working together. The next summer I had applied for the Victoria Fringe, and got a slot, so I asked if he wanted to do a sketch show with me. THE REST IS HISTORY

Did you fight about who got to have their name first? How did you decide?
Nah, that’s a silly thing to fight about. Our first show was called the Peter n’ Chris Show with Chris n’ Peter. But everyone just called it Peter n’ Chris. So I guess the answer is, we are Peter n’ Chris because YOU the audience said it in that order cause it sounds nicer.

How do you approach creating new work?
Lots of the time we start with a title and then write something that would fit that title. Or pick a genre such as western and just play around in that world, making fun of movies and tropes that we both know. Every show is a bit different. Our shows these days are much more sketch comedy, so we try and write a conflict for Peter and I as ‘performers in a sketch show’ to have and that is the narrative of the whole show.

That meta element lately has manifested itself in you threatening to break up in the middle of the show. How much of what you put on stage comes from real conflicts you’ve been through as a team?
We put those meta elements into it to make it stand out as a sketch show – rather than lights up/ lights down on several short sketches, we weave a greater narrative into it. Lately, that has been a lot about Peter and I breaking up. I guess because we were told ‘write what you know’ so we thought “I live in Toronto and you live in Vancouver’ let’s inject that into this for this show. But that was just the last two shows. Our newest show A Peter N’ Chris-tmas Carol, doesn’t have any of that and is pretty much just us doing our take on A Christ-mas Carol. And yeah, we’re for sure doing it in the summer during Toronto Fringe. NICE PLUG CHRIS. THANKS

What’s your favourite fringe festival to perform at and why?
I like them all for different reasons- but I’ll say the top 3, are Toronto, Winnipeg and Edmonton. They are a good mixture of being very big, very fun, and the potential to make money is there. Edmonton might be my favourite just for the fact that the festival vibe is strong- there are street performers, clowns, food carts and beer tents everywhere. And mini donuts.

In Peter vs. Chris, you took audience suggestions for the final category of competition. What was the idea you heard most often? What was the weirdest?
I think the most common shoutout was something to do with how we look. We were asking the audience for a suggestion on a category for us to compete in- we would always look for something like “intelligence, singing, pushups, charisma”… but we almost always got something to do with looks like, “hair or facial hair”. They came up every show. The weirdest was “breath smell”. But that was funny and easy to figure out- we just made her smell our breath. Can’t remember who won. Tie probably

You’re also nominated this year as part of the ensemble of Bright Lights. What was your first thought when the idea of doing a show with Kat Sandler and Morro & Jasp first came up?
Yes Please!

Kat wrote that show for the cast and based the characters in part on your own personalities. What aspects of yourself did you see in Wayne?
I think it was more along the lines of “ she wrote parts she knew we could nail’, but with that comes elements of ourselves, for sure… I guess ‘arrogant stupidity’ I can relate to with my character, but I’m not as dumb as that character was. A bit, though.

Everyone has a different interpretation of what the play is about. What’s your version of the story and how your character fits into it?
I always saw it as a purposefully open ended play with an interpretive ending- but at the core it’s just about people who are looking for a place to belong. There’s obviously a strong theme of ‘belief’ and ‘being believed’ but for me it was about people wanting to find people to listen to them and be heard.

Do you have a favorite moment in the production?
I just loved the rehearsal process so much. Working with everyone every day always left me in such a good mood at the end of the day. I love them all

Who are some of your comedy heroes?
Growing up it was all Jim Carrey, Will Ferrell and Ben Stiller. They are still up there… But I’m inspired by those people who are making their own work into television right now. If I could have the show It’s Always Sunny In Philadelphia that’s the dream

It doesn’t really work as well when I write it out….and it’s certainly not my joke. But it’s my favourite knock knock joke.

What are you doing now? Plug your upcoming project(s).
A Peter n’ Christ-mas Carol will be in the Toronto Fringe

Check out our Youtube Chanel for a lot of videos coming out in the next several months! [Ed. Note: their latest video “Stand Near Me” not only features 2015 MyTheatre Award winner & 2016 MyTheatre Award co-host Gwynne Phillips, but it also features a mantel cameo by her 2015 trophy].

Do you have anything you’d like to add?
Thanks a lot! And I’m looking forward to [the awards party].