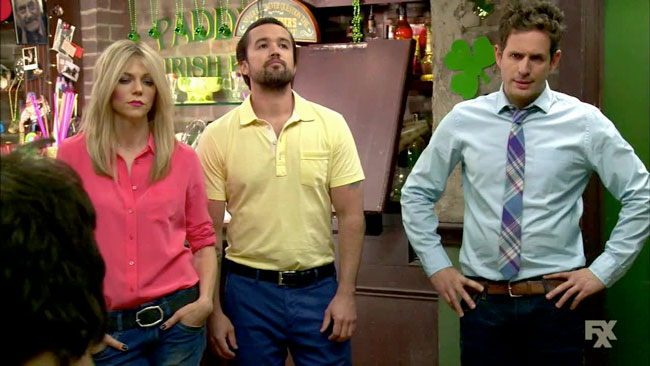 These Days, in Philadelphia

FX(X)’s brash buddy comedy It’s Always Sunny in Philadelphia isn’t my kind of show. I don’t like brash, and I really don’t like that everyone on cable is a psychopath you’re supposed to pity rather than root for. But I only have one rule when it comes to anything that’s not my kind of thing- if it’s good enough, it doesn’t matter. This applies to absurdist theatre, vampire romance, contemporary orchestral music, dick jokes, and gritty cable dramas in about equal measure (among other things). Over the course of its nine (!) seasons, It’s Always Sunny in Philadelphia has walked that line fascinatingly. When it’s good, it’s so good that it completely transcends the parts of its framework that really don’t jive with my sensibilities. When it’s bad, I dislike it far more dramatically than when I watch a bad episode of something more in my wheelhouse.

For the most part, after a rock-solid first season full of smart episodes with strong points of view, the show has been hit-or-miss for me. When the dreamteam of crazy-smart producer/writer/stars Rob McElhenney, Glenn Howerton, and Charlie Day were at their inventive best (and they kept Danny DeVito’s intolerable mess of a character in the background), Always Sunny could hit pretty high highs (“Dayman, Fighter of the Nightman”!). But it could also hit some pretty low lows. This was perhaps best illustrated in Season 7 where masterpieces like “Chardee MacDennis: The Game of Games” and “Thunder Gun Express” lived alongside something called “Frank’s Pretty Woman” (which is exactly what it sounds like). Why did you comment on the show’s quality in past tense, you ask? Because It’s Always Sunny has done the unthinkable in its old age- not only has it leveled out, but it’s actually gotten better.

Last season and what we’ve seen so far of Season 9 are some of the best work the Always Sunny Gang has put forth in their entire run. In the entire 10-episode arc of Season 8, there are only two installments I don’t love (“The Maureen Ponderosa Wedding Massacre” and “Frank’s Back in Business”). From Mac and Charlie’s discovery of “an original Hitler” painting, to The Gang’s self-aware door-to-door trash scheme (cleverly titled “The Gang Recycles Their Trash”), to Charlie’s descent into world-dominating madness while online gaming, to the absurd courtroom drama of the excellent finale “Reynolds vs. Reynolds: The Cereal Defense” (Mac’s argument against evolution is exactly the sort of thing that makes a person convinced that Rob McElhenney is a genius). The season’s best episode (perhaps my favourite of the entire series so far) is “The Gang Gets Analyzed”, in which Dee drags the boys to her therapist to hash out the important issue of who should do the dishes. The resulting half-hour puts on full display the wonderful effect of Always Sunny‘s unique showrunner-ensemble. I don’t think there’s another sitcom in existence where each of the main actors has such a thorough grasp on their character’s psychology (I’m not including DeVito, I think Frank’s the worst thing that has ever happened to this show, apart from the fact that his presence was likely what kept it on the air). Writer Luvh Rakhe (who also wrote Season 7’s fantastic Indiana Jones parody “The Gang Gets Trapped”) tapped into 8 years of highly detailed character construction to unravel Mac, Dennis, Charlie and Dee perfectly, each in their own little solo segment with therapist Kerri Kenney-Silver.

The current season has also been nothing but fantastic so far (with a couple episodes making top marks). Starting with a wild and outlandish rumination on Dee’s role in the group in “The Gang Broke Dee”. (Related Note: though her three co-stars are the writers, Kaitlin Olson is every bit as integral to the success of this show. She’s a badass of vanity-free comedy, particularly in this episode). Then a revisiting of season one’s “Gun Fever” with “Gun Fever Too: Still Hot” where both sides of an outrageous debate are absurdly showcased and somehow insightfully spun (Mac and Charlie are pro gun; Dennis and Dee are anti gun; they all switch sides yet somehow fail to meet in the middle). The season’s absurdist high so far comes with its third episode “The Gang Tries Desperately to Win an Award”, in which The Gang (aka the Always Sunny cast and crew) complain about the fact that Paddy’s Pub (aka It’s Always Sunny in Philadelphia) is never even nominated for the “Best Bar Award” (aka an Emmy Award). They try to fix the problem by scoping out the competition, which includes a new place that recently opened in the neighbourhood (Louie, FX’s one big award-winner), a dark and gritty burlesque place with few customers but lots of acclaim (Boardwalk Empire and related intense things) and a brightly lit, hyper-cheerful, pop tune-blasting joint called “Suds” (take your pick- I immediately thought of Friends, but it could pretty much be any network sitcom. Big Bang Theory maybe? Tell me you’re not making fun of New Girl!). The staff of Suds is quippy, they serve signature cocktails to a lively crowd of overly-excited patrons and two of them are even engaged in a “will they or won’t they” scenario. One of my favourite things about the episode is that even our happiness-averse heroes ultimately find “Suds” charming (I like network sitcoms; they get an unfair rap). When The Gang tries to recreate this effect at Paddy’s, it involves inviting just one black friend (but not too many because that would make it a “black bar” and black bars don’t win awards) and recasting Dee as “the cute one”, complete with lots of flattering lighting, a will-they-won’t-they subplot with Mac (a fun nod to the actors’ married-ness), and strict orders that she is not to try and be funny (that’s too threatening). The episode also features not one but Two fantastic Charlie Day original songs; always a treat. It’s bitter in a fun way (Always Sunny often is) and exactly the sort of thing that a person who watches way too much TV would eat right up (me, I’m talking about me). The following week, Mac and Dennis bought a time-share and the American Dream culture of pyramid schemes and fast-cash solutions got the patented Always Sunny takedown (one of the more effective takedowns currently in American culture; make of that what you will).

If Always Sunny can continue the streak they’ve been on for a little over a year, it could prove to be even greater in Season 10 than Season 1. I’m pretty sure that’s never been done before… which is exactly the sort of sentence that spurs on inventive weirdos like The Gang.