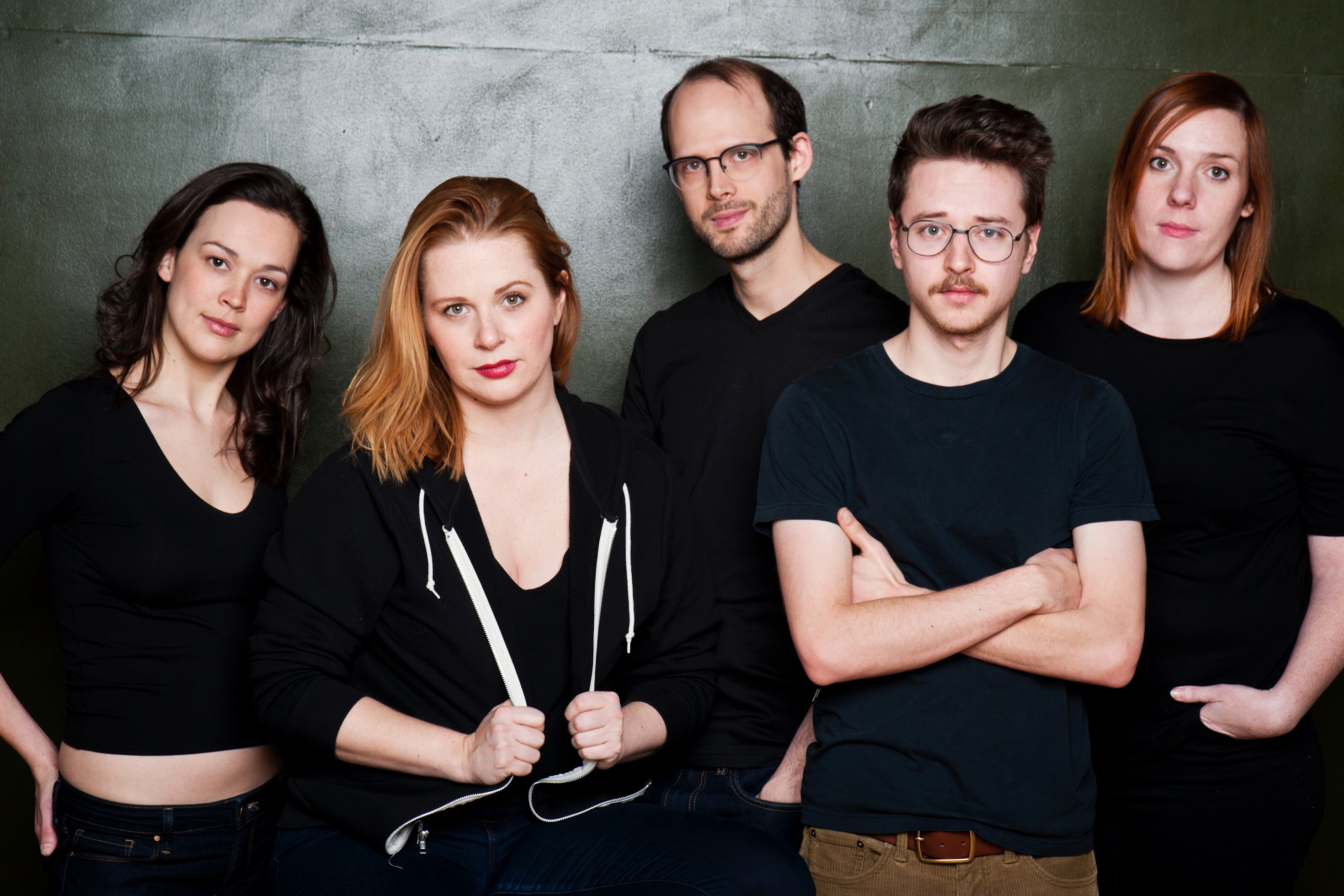 Clever, quirky and insightful sketch troupe Dame Judy Dench is nominated for the second year in a row for Outstanding Sketch/Improv Performance. Combining the unique voices of Shannon Lahaie, Jessica Greco, Chris Leveille, Gavin Pounds and Claire Farmer, the group’s delightful Fringe show Everything Else Was Sold Out earned one of only a handful of A grades from our reviewers at the festival. We caught up with them after a successful Toronto Sketch Fest run to chat about how their nominated set came together.

What have you guys been up to since last year’s interview series?
Well, we had a great time at both Toronto and Montreal Sketch Fest. We were nominated for our first ever Canadian Comedy Award. And we participated in our third consecutive Toronto Fringe with Everything Else is Sold Out, for which we were awarded Patron’s Pick and Best of Fringe. And we ate a lot of potato chips……A LOT.

Tell us about Everything Else is Sold Out. How did that show fit with or differ from previous shows?
Sold Out was so much of fun to work on, we picked the title before we had anything written. Much like with our troupe name, we wanted to pull a bait and switch with the audience and score more bums in seats!! Sold Out is definitely on brand for us, we tackle the absurd and the strange and social politics. There are literary and historical references as well as big wacky character pieces. And a Justin Bieber dance number. Every show we like to work with a new director and this time around we had the pleasure of being directed by Paul Bates, a CCA nominee himself as well as a gifted writer, director and performer. His fingerprints are all over this show. He helped us build a non stop 60min comedy marathon.

What were some of the sketches that got cut from the show? Were any added at the last minute?
We cut a sketch about gun violence a few weeks before opening. The Orlando shooting had just happened and in the wake of that tragedy we decided to shelf the sketch until we felt like the time was right. We are firm believers that there is no need to upset or offend people in an effort to make them laugh. Challenge or satirize sure, but it’s important to us that we respect our audience and their experience.

How much thought goes into the balance of who’s in what scene and how much each of you is featured?
We all write material for the shows and collaborate in the rewriting process. Often someone will write a sketch and not even be in it, instead they’ll hand it off to other troupe members and let them put their own spin on the piece. We want everyone represented equally in our shows. So when we decide on which sketches to use and pick a running order, we will recast scenes where need be. Gender is unimportant to us. We never rewrite when we recast based on gender. For the most part our sketches are designed for any one of us to be able to step in. We pride ourselves on being an ensemble.

Do you each have specific types of roles you tend to gravitate towards when creating new sketches?
We’re 5 very diverse performers with 5 different performance backgrounds. Inevitably that is seen in the writing process. Satire, broad character pieces, relationship centred, absurd, ripped from real life, we each have different styles and sources of inspiration. So we like to mix it up, but every show will include a big Chris Leveille character, a joyful Shannon Lahaie, an intellectual Claire Farmer, a straight woman Jessica Greco and a shirtless Gavin Pounds.

Which joke usually got the biggest laugh in the show?
Chris Leveille does a solo piece where he plays a ballroom dancing Vampire, the last line either got the biggest laugh of the night or solicited a chorus of “awwwwwwwwwweeeeeeee” from the crowd. The four of us would wait backstage each show eagerly to see which way it would go. The beauty of doing something live is that the audience is different every time. A line that had them rolling in the aisles one show would break their heart the next. We kinda love that dichotomy.

Do you have a favourite moment in the production?
Backstage is always are favourite. Whether it’s the dance party we have in the wings to the pre show music, or the quick changes we’re helping each other with between sketches, or when you know a joke is coming and your cast mate gets that rolling laugh while you listen behind the curtains. We really like each other, so we have the most fun in our private moments.

What were some of your other favourite shows at Fringe this year?
So many!! Man&Son, SexT-Rex’s Wasteland, Peter vs Chris, Bright Lights, True Blue, Dance Animal, The Nice Guys, Cam Baby, Dan’s Inferno– there was a lot of great stuff to see this year.

What are you doing now? Plug your upcoming project(s).
More festivals, shows around Toronto all working towards a show at the end of 2017 of new material. We all have different projects we’re working on individually but our Tuesday nights are owned by DJD. We are always working on new material.