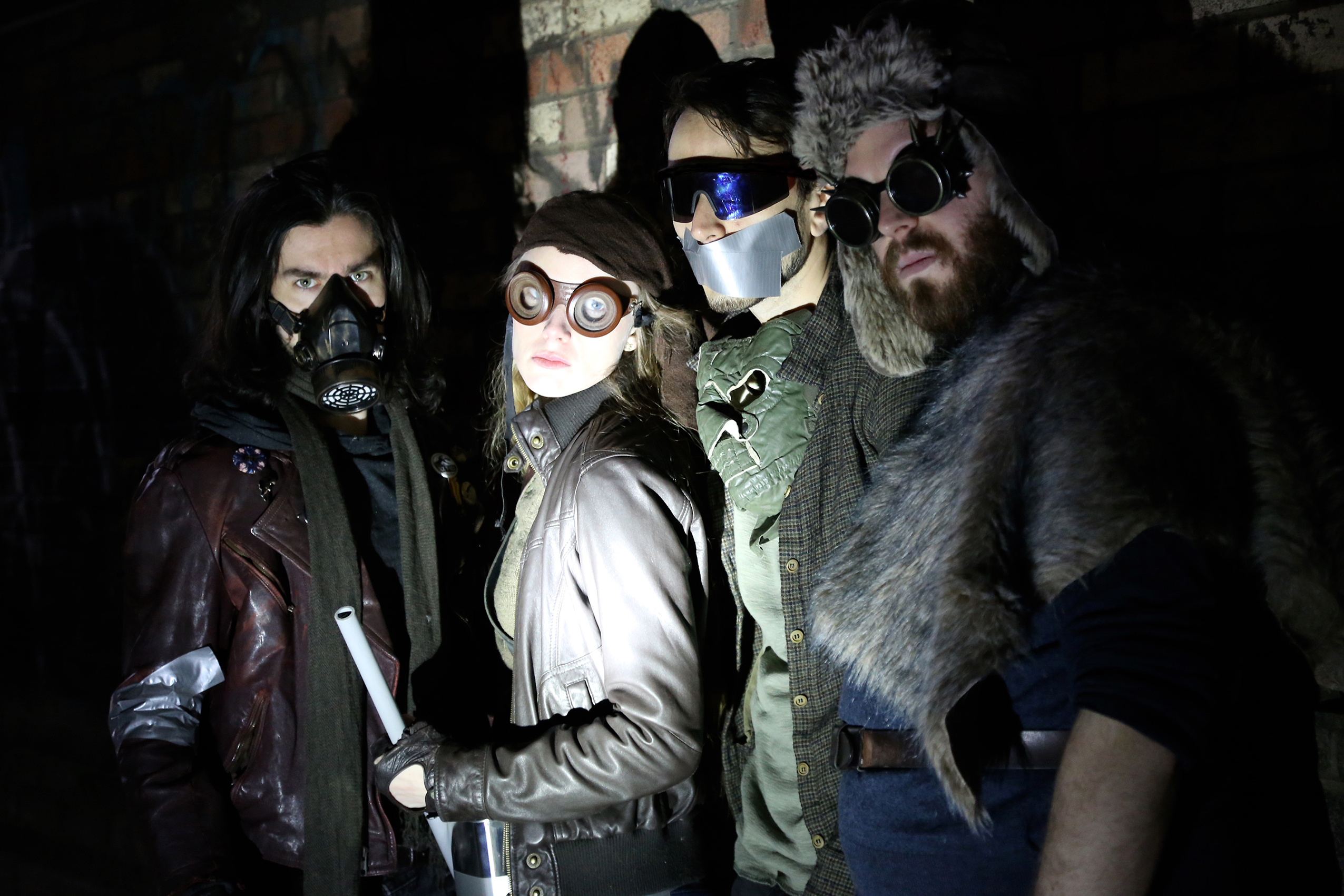 Wasteland (A+)
The latest adventure from lunatic physical comedians Sex T-Rex is mostly Mad Max with a large dash of Wizard of Oz plus almost Psycho-like, Fight Club-ish twists, all doused in 80s rock. Obviously. Josef Addleman, Conor Bradbury, Julian Frid, Kaitlin Morrow and director Alec Toller create a vast world using only grey pipe and, as always, produce some of the most thrilling cinematic sequences ever seen outside (or, frankly, inside) a cinema. Car chases, fight scenes, high comedy, tense tragedy- it’s all there and it’s all brilliant in my favourite thing I’ve seen from the company. Kaitlin Morrow’s performance as a dog should be studied in theatre schools.

#MannequinGirl (B+)
This solo musical about the price of becoming a commodity is poignant without being preachy, fun without being frivolous. The songs could stand to be far more interesting and Alyssa Minichillo doesn’t always deliver on the top notes but the production is built on a very solid foundation and adorned with many a clever, topical conceit.

Places to Wait (B+)
Have you always wanted to know more about Winnipeg but were hopelessly bored by the prospect of researching Winnipeg? Aaron Simm is the solution to your problem. Places to Wait is a funny, straightforward storytelling show about Winnipeg- its history, its community, what its like to feel trapped there. Simm’s charm and humour shine as he paints a somewhat disjointed picture of the small town/big city he called home for 27 years. A tragic bomb that could use a lot more exploration is dropped unexpectedly and with little context in the middle of delightful anecdotes about hockey teams and raffles gone awry but Places to Wait is generally an enjoyable diversion on your way to something more interesting than Winnipeg.

Toller (B+)
This biographical portrait of flamboyant figure skater-turned-painter Toller Cranston is balanced on the line between wonderful and disastrous. The play- which I insist should be classified as a solo show- is a stylish and achingly human glimpse at a man of many layers. David Benjamin Tomlinson enters as Cranston, grand as can be, and spouts some poetic, megalomaniacal nonsense that I imagine must be a quote because it’s an awful lot to put on a real-life character if its an invention of playwright Sky Gilbert. From there, Tomlinson gradually drops the act and his guard in conjunction, slowly showing us more and more of the real person behind Cranston’s crazily crafted persona, coming to a point in the production’s most moving scene as he vulnerably recounts a childhood trauma. Were the play simply this- a complex representation of a mercurial, unknowable figure; a showcase for the remarkable Tomlinson who is simply stunning in the role- I’d have declared Toller one of the unexpected triumphs of the Fringe. Alas, Gilbert takes it too far, attempting to highlight the fallen final days Cranston spent in Mexico before his death in 2015 by introducing the vaguely defined “master” figure Miguel and adding some sexual shock factor. Miguel is badly written, badly played and does little to further illuminate Cranston. Toller is most fascinating when it’s a self portrait, an imagining of what Cranston would tell us about himself if he could shape the narrative. Introducing Miguel takes away everything that makes Toller really work.

Songbuster- an improvised musical (B)
The feat Songbuster accomplishes at every performance- creating an entirely new musical on the spot off an audience suggestion- is pretty remarkable. The night I saw the show, the result was merely so-so, hence the B. Tricia Black quickly became the standout by turning her wedding planner character into a malicious villain and the charming Kristian Bruun got a few good jabs in as the best man but most of the other characters were quickly reduced to repetitive single jokes while we never got to see some of the less aggressive performers follow the promising instincts they hinted at before being bowled over by yet another jokey solo from one of the “stars”. At least at the performance I saw, Songbuster was an impressive but sometimes frustrating experience, mostly because ground was laid for things I definitely wanted to see then those paths were blocked off before anyone walked them.

Stage Manager’s Guide to Dating Assholes (C)
Catherine Fergusson kicks off this show as a charming Alison Brie-like stage manager who’s interpreted the role in a housewife-ish way. Other interpretations that show up are The Drill Sergeant SM (Katie Coseni), The Cheerleader SM (Jemma Robinson) and The SM “who can’t get her shit together” (Shannon Farrell). Such limiting roles reap few benefits and the play quickly becomes just a lame love triangle wherein smart, capable women fight over the dumbass man who ends up stealing their show (Alex Allan as the play-within-the-play’s director). The good news is that a fun prop-delivery device is employed for the first half of the show and, if you sit in the front few rows, you might get a cookie.

A Glass Hive aka The Comedy of Errors (C)
The first thing you need to know is that I hate Comedy of Errors. I think it’s the weakest play in Shakespeare’s entire canon (I mean, it’s mostly about confused people haggling over a necklace) and for some reason two different companies have decided to mount this particular terrible script at this year’s Fringe. Duncan reviewed the Shakespeare Bash’d production, and loved it, but I just couldn’t stomach this one, adapted and directed by Bruce Dow (who does borrow amusingly from other scripts to craft his new text) and starring a mostly mediocre class of theatre students who are trying far too hard. The set is great but its mirror concept is extended cheesily into the direction of the play itself (characters are forced to face a mirror whenever they’re put on the spot!). Dow latches onto the idea that Aegon (a serene Naomi Ngebulana) is marching towards his death and gives the play a narrator named Death, played with scene-stealing charisma by Matthew Barker. Of course, making The Comedy of Errors more serious doesn’t exactly make a ton of sense since it’s utter nonsense and all the best productions embrace that but Barker is a welcome metatheatrical addition nonetheless. The central action is elevated by the company’s best players Sabrina Shallop and Taylor Priel in the roles of Antipholus and Dromio of Syracuse, both grounded and honest despite the craziness around them, but, ultimately, this really does not appear to be the showcase I think it was meant to be.