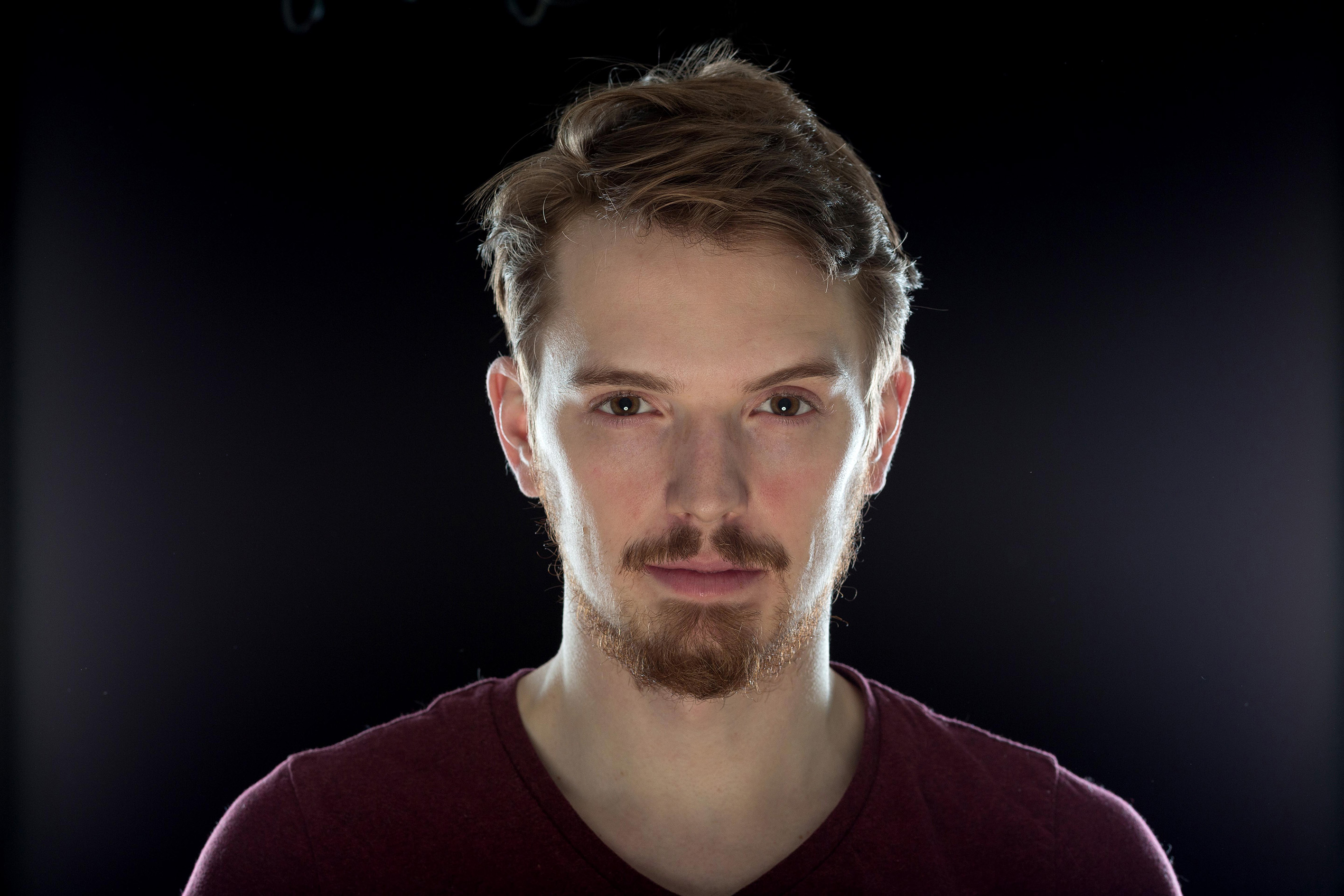 One of our favourite productions of 2014 happened at the Storefront Theatre in March. Dark Matter sounded strange and ambitious and really pretty random- Heart of Darkness as a sci-fi play? What?!- but the deft hand of director Alec Toller led this ensemble-created adaptation in brilliant and unexpected directions culminating in four My Theatre Award nominations, including Best Production.

By the end of the Nominee Interview Series, you’ll have heard from every single member of the Dark Matter cast but we thought we’d start you off with some immensely clever words from their immensely clever director.

Do you remember your first formative experience with theatre?
One of the first was seeing a three-person production of The Tempest, starring Mark Rylance at the Globe Theatre in London. They had a choir and dancers that aided with physical movement, like supporting actors who were acting drunk by helping them lean back improbably far. They had only a few props, like a rope hanging from the center of the stage that they used for a variety of things, doubling as both Caliban’s prison when he was wrapped up in it, and an expression of his freedom when he swung wildly on it. The whole show was transformative.

Who are some of the artists who’ve always inspired you?
The first who comes to mind is Martin McDonagh. He is an evil man and a first rate playwright. His work is dark and uncomfortable and hilarious, and balances honest characterization with theatricality.

Tell us about the origins of Circlesnake Productions.
I wanted to create a company that mixes theatre and film forms to create an accessible language. We all watch movies and way way too much TV, and it’s become our dominant form of storytelling. The great thing is that you can do absolutely anything on stage because it relies on the audience’s imagination. Film is often far more literal.

How did you assemble the Dark Matter team? Tell us about the Best Ensemble-nominated cast.
It’s difficult to hold auditions for this kind of work because we need people who are actors, writers, improvisers, and fearless enough to embark on collaborative creation, so I cast through people I knew or through recommendations.

Colin Munch and I have worked together for over a decade, and we had just collaborated together on Special Constables, a physical comedy we did at the Storefront in December 2013. He’s a brilliant storyteller and was essential in helping to shape our improv-based rehearsal process.

Mikaela Dyke was also a key collaborator on Special Constables, and it was unfathomable to me to not work with her again.
Joshua Browne and I had worked together on Angel City, a Sam Shepard show for the 2013 Playwright Project and the script was utterly opaque. Somehow he managed to find a way through the language and into a believable character, and we had been looking to work together since.

Kat Letwin was recommended to me and I saw her in Scheherazade at Next Stage. She is alchemical on stage, rapidly switching from moment to moment yet keeping it grounded, and I offered her the part right after the show.
I’ll also mention Hanna Puley who created beautiful costumes for us extremely quickly.

Dark Matter was ensemble-created. How did that work? Where did the idea come from and how did it develop?
Colin and I were talking about doing a genre-adaptation of a classic text and somehow Heart of Darkness in space just leapt out to us. The story of travelling to a great and terrible unknown only to discover the darkness in themselves is a perfect fit for a science-fiction setting. From there, the cast and I assembled, started exploring the possibilities of the world- all originally from the book- and then spun it into our own creation.

Sci-fi is one of the hardest genres to pull off in low-budget theatre. How did you approach that obstacle?
By making you do it! We wanted to keep the visual-heavy approach to sci-fi, but knew we couldn’t actually show that much, so we relied on the audience’s imaginations. We had done a similar approach to Special Constables and wanted to see if it would work for a drama instead of a comedy. The actors deeply committed to the world, and what they saw and reacted to, so too would the audience.

My favourite moment of this was when Marlow (Kat Letwin) looked beside the audience to see something on the wall, and one of the audience members looked over his shoulder to see what she was looking at too. This was near the end of the show and there had been no real props or set pieces before, but he believed that she saw something and had to see too.

Walk us through the rehearsal process. Was the script solidified before getting it on its feet or did everything happen all at once?
We started loosely around two months before opening, having broken down Heart of Darkness into an outline. From there we explored the world through discussion, which was the most fun: we were a bunch of big, big nerds creating their own science fiction universe. We then created our own outline that detailed each scene and then improvised those scenes three or four times. After a scene was improvised one of the actors or myself would write it and bring it to the next rehearsal where we would either workshop it or rehearse it. We kept shaping the script right up until the show, and continued to tweak it throughout the run. It’s a demanding process, but it creates characters that are firmly grounded in the actors playing them. It also forces us to be better writers because we’re constantly giving and receiving feedback on the work. I should add that a casting requirement was humility – there were surprisingly no ego-battles about work that was precious to us. Some scenes got cut entirely!

Heart of Darkness is incredibly dark but Dark Matter was surprisingly funny. How did you strike that balance?
Mainly by casting hilarious goofballs. Also, we intentionally wanted a lot of humour in it. I don’t think you can access darkness without laughter. It’s a natural response to facing bleakness. It makes the weight of the script heavier to contrast it with levity.

What would you say is the most important conversation you had with your actors throughout the rehearsal process?
There were many deep conversations throughout this (I mean, it’s about existential space-sadness), but one that sticks out was working with Josh Browne on creating Kurtz. We had to explore two characters with him, the man he was before he had set out on his journey and who he had become by the time of the show. Kurtz had faced and enacted extreme trauma that shattered his worldview, so what was his worldview before? What was left? We had to reverse engineer post-traumatic stress disorder, and find the moment that replayed in his head over and over, the question that he could never fully grasp. It was an intensely draining process. It took an enormous commitment from him, and I think that was a discussion point we kept coming back to: if we commit to the world, the audience will too.

What were you hoping your audience would take away from Dark Matter?
The central point for me starts with was how utterly hostile the universe is to life existing. Life requires consistent conditions and there are an infinite number of things that can change at any moment that would threaten life on Earth, from asteroids to black holes to gamma blasts. It is incomprehensible that we even exist, and in the face of such vast emptiness, what do we hold on to to persevere through life? Or to enjoy it? Our existence is a fragile one, and I think we forget how mentally fragile we are as well. Just as Kurtz and Marlow can break, so too can we if we are isolated. We need other people to reflect ourselves back to us, and without anyone to reflect us we are hollow.

Do you have a favourite moment in the production?
My favourite moment is when Marlow is describing travelling through space, and the lights fade to black and we have her lifted on her back by another actor so that she appears to be floating. Just as she mentions the stars, a string of white Christmas lights turn on over the audience, and suddenly we are in the stars too. It’s a brief moment of gentleness in an otherwise difficult show.

I also like the first moment people laugh, because they are surprised to find that the show is funny too!

Tell us a bit about your film work.
The main project I did was a feature film I directed called Play the Film, written by Kelly McCormack and produced by her and Kristian Bruun. It stars a ton of incredible indie theatre talent, including Colin Munch, and we somehow made it for a thousand dollars. The story is of the opening night of a play gone horribly wrong: the play within the film is supposed to be a high-profile murder trial, but when they mess up and that murder doesn’t happen on stage, they have to improvise it to try and get it back on track. It’s a wild farce, and we’ve been blessed to follow it to various festivals around the world and a handful of awards, including an incredible screening at the Royal here in Toronto for the Canadian Film Festival. It will be available online in the next few months.

Do you have any dream projects?
I’d like to direct something of Martin McDonagh’s, with The Pillowman being my favourite play. I also want to continue creating collaborative, highly physical theatre like Dark Matter.

What are you doing now/ what’s your next project?
I’m set to be directing the next Sex T-Rex show for the Toronto and Montreal Fringe festivals. They also do work that is very cinematic, without props or set, all imbued action, and it is wild and hilarious. They are incredibly fun to work with and very talented.

I’ve also directed my second feature film, Akela, this past summer in England, which is basically the Girl Scouts meets Hot Fuzz. We’re currently in post-production for that to get it ready for a festival run.

I aim to do another Circlesnake collaborative production later this year.

Do you have anything you’d like to add?
Theatre can do anything, and I think sometimes both creators and audiences forget how limitless theatre can be. There is not limit to the scope of a show you can put on stage, if you embrace the limitations of the stage and rely on audience imagination. It’s scary to do and uncomfortable, but we need to create plays that make us uncomfortable. It’s the only way of making work that’s transformative.