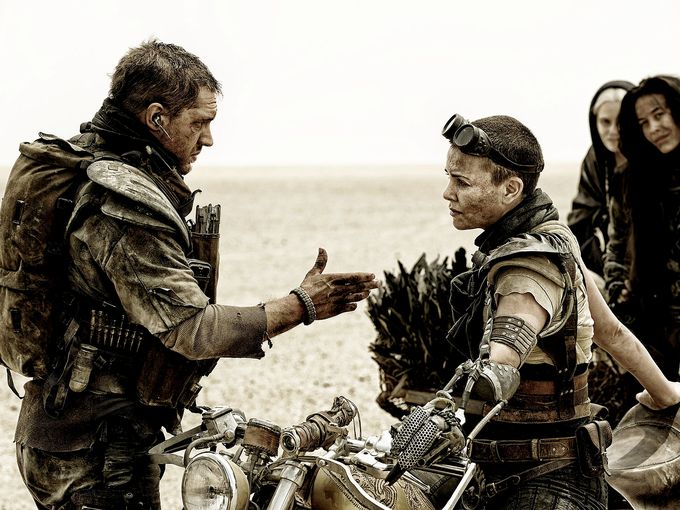 Mad Max: Fury Road is a shot of adrenaline in the heart. It’s jolting from start to finish – with guitars that shoot fire and mutants who steal blood and cars with spikes and a dystopian world so dark it makes other dystopias look rosey by comparison. It has a plot that can best be described as “light” – people drive from point a to point b and back again. And yet it grounds that plot in a world so thoroughly rendered that it’s easy to forget how simple it is.

It is also, inarguably, feminist. As a overthinking film reviewer with a deep abiding love of action movies – I often spend half my time forgiving. Forgiving Star Trek for relegating Uhura, forgiving The Avengers for saddling Black Widow with a fertility storyline, forgiving an entire genre for being so laser focused on men. And to see a kick ass, fun, over the top, not preachy action film that requires no forgiveness feels like a physical relief.

I don’t want to hit to hard on this – mostly because Mad Max is not exactly the deepest film. It’s a survival story. The awesome world, and brilliant casting, and awe inspiring sets, costumes, stunts and cinematography, are sincerely top rate, but this movie isn’t really interested in exploring the human condition. It is interested in making a dark survival story in which blind mutants play flame throwing guitars on the middle of a war zone.

But the lack of sexism of the movie is part of what makes this movie so deeply satisfying. It’s part and parcel with creating a mythology that actually makes sense. It’s a larger piece of the puzzle of creating a deeply humanist movie, in which even brainwashed mutants with malignant tumors can get a chance at redemption. It’s not a political agenda. It’s… good filmmaking.

Nothing about this movie is lazy. Definitely not the stunts, which are so astounding that it’s shocking no one died making the movie. Definitely not the acting, with Tom Hardy giving a frenetic, funny, damaged performance despite having almost no dialogue. And not in the characterizations – with Charlize Theron playing a ridiculously named character Imperator Furiosa, she still delivers a fully rounded, pained backstory, and a severity that is earned. And not in its feminism – women aren’t magically stronger than men, men aren’t universally evil, and male characters exist and have agency. This is how you make an action movie that is simple, but not stupid.

Plus it’s undeniably intense. Never once during its 2 hour running time did I find myself able to breath, yet alone get bored. Its motion and verve and life force carry the viewer along to its satisfying (if slightly overly optimistic) conclusion. But it’s the care and detail of the filmmaking that leaves such a good taste in your mouth once the movie is over.