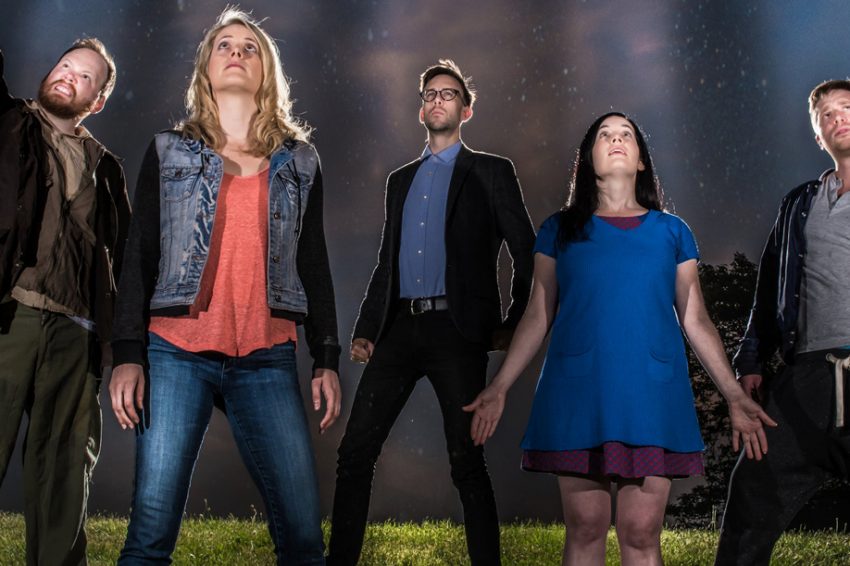 Bright Lights (A+)
I’ve gone back and forth on what to say about this show for days now. I feel that all the review-style praise that there is to be heaped has already been heaped on this sold-out gem by recent Dora winner Kat Sandler starring all your Fringe favourites… and I don’t want to ruin the experience for remaining ticket holders by shining too pointed a light on the semi-hidden insight that makes this show more than a fun character piece about UFO believers. So, what I’ve decided to do is save everything I have to say for a spoilery post-Fringe deep dive into what makes this arguably Sandler’s best work to date. For now, I’ll just give it an A+ and leave it there.

Dance Animal (B+)
This empoweringly imperfect and goofy dance show is a lot of fun. The cast ranges from comedy superstars (Kat Letwin, Kevin Vidal, Allison Price) to great dancers (Leighton Williams, creator Robin Henderson) to a few who are neither but the enthusiasm and complete abandon that characterizes the show makes the technical imperfections or narrative strangeness ultimately meaningless. The highlight is Vidal’s slam poetry-style monologue that is the show’s one truly dramatic moment. Otherwise, it’s just absurd silly fun.

The Fence (B)
On one hand, the Wexford students who stole the 2015 Fringe with Summerland and return to star in The Fence are some of the best triple threats at the festival; they’re certainly the best dancers outside of a dance show (I wish the company could find a way to clarify who is appearing in certain numbers because the ambiguous company list leads to a lot of “who IS that guy?!”) and their enthusiasm is infectious. On the other hand, writers Anika Johnson, Barbara Johnston and Suzy Wilde put themselves in this show and, despite being far more experienced, they just aren’t as good as the kids. Nor is The Fence nearly as good as Summerland. Billed as a “concept album”, it’s really just a selection of random songs that don’t go together well enough to create a properly thematic song cycle let alone a narrative work. Lin Manuel Miranda’s influence is felt heavily in copycat number “Sand” and he’s quoted in the sappy “Orlando” tribute that feels shoe-horned in and undercooked (it’s an admirable sentiment and the emotion some of the cast portrays is incredibly moving but not every tragedy needs a “We Are the World” theme song, certainly not one that’s not selling singles to raise aid money). Though stronger than most composition you see around the Fringe, The Fence doesn’t make much of a musical impact beyond simple comedy song “Ryan Gosling” (delivered excellently by… nope, no credits, remember?). The whole thing annoyed me greatly but I’ll always cheer loudly for those incredible Wexford kids and they’re just as good in The Fence as in anything, pulling the show’s grade up by at least a full letter.

Next Thing You Know (B)
Joshua Salzman’s music is the highlight of this familiar tale of quarter life confusion. Three of the four voices in the cast are pretty good until they’re pushed higher than they can comfortably go by the surprisingly challenging music, complete with four-part harmonies, counterpoints and the occasional accapella moment. Ryan Cunningham’s lyrics are decent (though he seems to take most songs just about one sentence too far) but his book is somewhat uninventive. The characters are all fairly commonplace and it’s only the intense likeability of Olivia Ulrich and Liam Naughten’s performances as the leading couple that make them worth rooting for. If I could Frankenstein a musical using The Fence‘s ensemble, Next Thing You Know‘s music and The End‘s book, I’d be just about the happiest.

The End (B-)
The book (written by leading lady Miriam Drysdale), as I just said, is great in this apocalypse musical. Drysdale’s conception of the future is both fantastical and threateningly realistic. Her show is well structured and her characters have believable motivations and backstories. Unfortunately, though sung well by Drysdale and Haritha Popuri (not so much by their co-star Sam Roulston), Andrew Kalu’s music is fatally boring. Good storytelling and great singing gets you pretty far but this is a musical and you really need to have something worth singing.