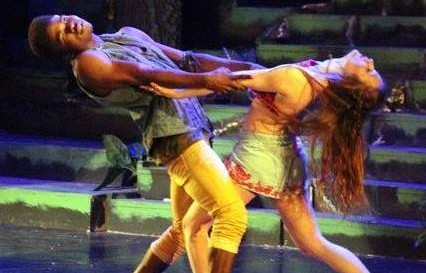 Summerland (A+)
In the shadow of Sheridan College’s massively buzzy immersive experiment Brantwood, I was expecting a charming also-ran kind of production when I heard about its fellow high school site-specific musical Summerland. Arriving early at Harbord Collegiate, young actors are everywhere, playing out personal dramas and teasing the action to come. But, unlike Brantwood, the pressure isn’t on you to choose whom of these kids you care enough about to follow around. As the official start time approaches, the Summerland audience all moves in one direction to one location (the 200+ seat Harbord auditorium, already almost sold out for the full run) where we’ll sit for the duration of the traditionally structured 90 minute production. But while its presentation is far less startling than Brantwood’s, Summerland absolutely does not belong in its shadow. Writers Anika Johnson, Barbara Johnston and Suzy Wilde have crafted a memorable new piece that’s more inventive and emotionally riveting than the majority of new musical theatre getting noticed today. There are some familiar notes in both the realistic frame (a Breakfast Club-like group of disparate high-schoolers receive a punishment that forces them to find common ground) and the fantastical heart (the ghost of JM Barrie looms large over the titular fantasy world when the kids end up after a bus crash) but the ambitious world-building, thematic conclusions and emotional honesty in Johnson & Johnston’s text join their (with Wilde) catchy, beautiful score to form something really special. But it’s perhaps the talent on stage that is most insane. The cast is made up almost entirely of teenagers from local high schools. Teenagers who should be making the current crop of young professionals very nervous because they are simply astounding both in quantity (nearly 100 performers- each with a distinct character and purpose- make the world feel expansive and the choral parts rich) and quality (I’m not exaggerating when I say that in the entire Fringe I’ve heard maybe two professional singers who can rival any of the many featured vocalists in Summerland). Honey Frid’s choreography (supplemented by Nicko Giannakos, Elijah Manalo, Nicola Pantin, Riley Sims and Valerie Stanois) is ambitious and the dancing incredible, though annoyingly under-credited (only the named characters are identified in the program, the rest of the ensemble- including featured dancers- are indistinguishable in the credits). I’ve never been so reassured about the future of Canadian musical theatre than I was for those 90 minutes in the middle of Fringe, watching a big and bold new work performed by an entire new generation of elite triple threats.

The Untitled Sam Mullins Project (A)
There are few performers in the Canadian theatre landscape with as reliable a track record as Sam Mullins. He’s always wonderful- charming, funny, sympathetic, clever- to the point where the promise of seeing his latest show at 8:45 got me through an entire day of terrible productions. It seemed that day that everything was missing the mark, but I knew Sam Mullins would be great. And he was. Only one of the four stories that make up the core of The Untitled Sam Mullins Project is a repeat (from his 2014 Next Stage show) and all the equally delightful parts come together in a beautiful and personal frame. It’s that personal touch that really makes Mullins stand out from other charming, funny, clever people- to see a Sam Mullins show is to feel like you know Sam Mullins. You learn his dad’s name (Bill); you gain insight into his life-long anxiety; you unite in your resentment of the ex-girlfriend who broke his heart (only to show up at the 2015 Toronto Fringe! I hope he’s using a false name in the story he tells about her because otherwise that poor girl is going to get some earfuls from the sell-out crowds who now feel like personal friends of Sam Mullins). He’s almost magically relatable, a quality that makes the experience of watching him alone on a bare stage telling stories in a spotlight for an hour utterly entertaining.

Life Records (B+)
In the same confessional storytelling vein of a Sam Mullins show, Rhiannon Archer’s solo show trades on the performer’s charm, humour and ability to connect with her audience. She begins with the story of her near-death experience and recounts with horror that the musical accompaniment to that moment was “Hollaback Girl”. Other songs that trigger memories of key moments in Archer’s life tour us through anecdotes both revealing (a contemplation of right and wrong prompted by “Jolene”) and trivial (an amusing exchange with her local grocery chain over their late-night song selections). No story is incredibly moving or incredibly funny but they’re all at least a little bit of each (well, the grocery store bit isn’t really moving but it’s got an extra dose of funny so it evens out). A limited but delightful portrait of a life traced through its unintentional soundtrack.

I’m Right Here (B+)
Song cycle #1 about how society has gone to shit is full of catchy tunes sung by three pretty good voices and one killer tenor (Michael De Rose, whom I could listen to day and night for ever and ever). Composer Anthony Bastianon and lyricist Brett McCaig’s songs are all in some way about how we’re too attached to our phones and completely lack personal connection. The show is charming and well-executed (with at least one truly excellent song- De Rose’s gorgeous emotional ballad) which is why I’m going to give it a pass on being so preachy and grumpy. We’re all here, in a theatre with our phones turned off, watching the stage intently; it’s the performers who have their faces buried in their phones.

People Suck (B+)
Song cycle #2 about how society has gone to shit is full of catchy tunes performed by five great comedians with mostly fine voices (the best singer, co-writer Megan Phillips, is also the weakest comedian; everything in proportion). There’s a larger range of topics covered here but the conclusions are just as tired as I’m Right Here’s. “People Suck”, apparently. They text while driving and eat the lunch you brought from home, they flake on plans and misuse the word “literally” (though I would argue that people who are always correcting others’ English also suck). Whoopdeedoo. It’s perhaps notable that the standout number is Allison Price’s innuendo-tastic title song about how people suck for not, um, sucking. I don’t mean to misrepresent the show’s effectiveness; People Suck is fun and clever and all that, but it’s emblematic of one of the principal problems I had with this year’s Fringe- everyone wrote shows meant to criticize the modern world but very few people wrote shows that capture the complexity of actually living in it.

pool (no water) (B+)
An excellent four-person ensemble (Chy Ryan Spain, Sarah Illitovitch-Goldman, Daniel Roberts and Allison Price) guides the audience through this funny/sad comedy/drama with a mixture of storytelling, traditional scenes and interpretive movement. The story of a tight-knit group of artists whose carefully balanced dynamic is thrown off by the sudden unwelcome success of one of their members, Mark Ravenhill’s text is full of petty jealousy and complicated human relationships. There were times when the mishmash of genres pulled me out of the emotion of the story but the complexity and ambition of pool (no water) makes it a standout even if it doesn’t completely grab you.