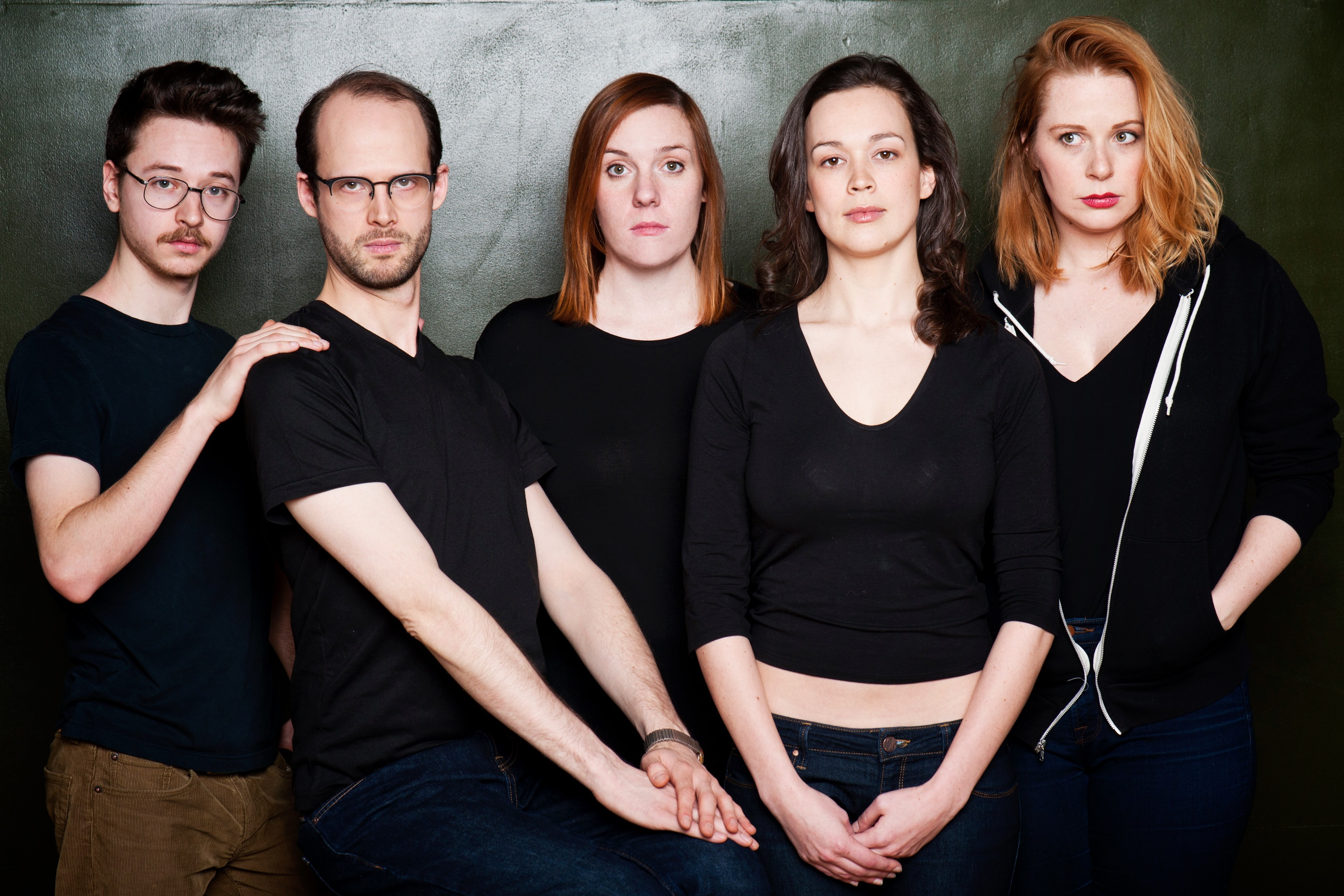 Everything Else Is Sold Out (A)
Dame Judy Dench– the five-person sketch troupe made up of Second City Conservatory alums Claire Farmer, Jessica Greco, Shannon Lahaie, Chris Leveille and Gavin Pounds- is one of those rare sure-bet comedy teams. Everything Else is Sold Out is a fairly standard format sketch show that is completely not standard in that every single sketch delivers. The trajectory of the performance is laid out by a diagnosis of the horrible disease “Montages” that gives us a tiny, teasingly vague glimpse at what is to come. Each tease blossoms into a full sketch- an Uber walker, a jar-collecting habit, a woman who just wants her friends to like her new hat, a lonely vampire trying to make friends by convincing people he’s not a vampire; most of the setups are simple and all of the payoffs are big. There isn’t a weak link to be found anywhere in the cast and they all have major moments to shine but Pounds and Lehaie stood out in particular this time around, the latter as the victim of “Montages” and the former as the leader of a fabulous “Sorry” flashmob that brings the performance full circle. Across the board one of the best hours of comedy at the Fringe.

True Blue (B+)
This is the second time I’ve seen Bad Dog’s improvised cop drama. During its first run at Bad Dog’s Bloor West theatre back in April, I gave it the equivalent of an A+ review, mostly on the merit of its inventive and functional format (though the excellent cast was also at the very top of their game that night). Like with a scripted play, the second time you see it, the focus shifts from the thing itself to the execution of the thing. The True Blue format is still working with remarkable precision and yielding consistently interesting results that put the show far above your average improv experience. All that said, the second time around, I just happened to catch a performance that wasn’t quite as strong as what I know this cast can do. The Fringe run has been really welcoming to guest stars- and certainly a great contribution from Kristian Bruun at the Friday afternoon performance was a testament to why- but, with nine performers on stage, the cast is starting to feel a bit unwieldy and less in sync. Part of this was due to the fact that co-lead detective Amy Matysio was out for Friday’s performance. Matysio’s calm presence and strong instincts were definitely missed but her absence also eliminated one of the only steady, serialized elements of the show in her character’s relationship to her partner, played by director Colin Munch. Working instead with a temporarily promoted Detective Nunez, Munch’s Detective Barnes was snippier and more controlling than alongside his stronger foil, breaking his strictly business seriousness only once to crack a humanizing smile. Paloma Nuñez, whose standout character building I missed in the cast of non-detective characters, smartly played into the awkward new-ness of the partnership, taking Munch’s Barnes to task for “contradicting her in front of the squad” (classic TV trope) when they couldn’t get on the same page at the scene of the crime and picking up Munch’s cue to use a name slip-up to further delve into his relationship with the woman she was temporarily replacing. The details of how guest star Caroline Toal (refreshingly assertive in her improv debut) murdered Tess Degenstein (also a guest, but a seasoned improv vet) were ultimately not that interesting and a lack of consensus about the details of the crime scene made for a lot of contradictory plot points. Of course, to nitpick a not-so-great episode of True Blue is still only to give it a B+ (which may even be a bit low; B+/A- hybrid); I can’t imagine any circumstances in which this (core) cast working in this ace format could ever produce anything lower than a B+.

The Pirate Queen of the Stars (B-)
A Han Solo/Mal Reynolds-type lady meets a Captain Kirk-type man, a mysterious speechless lady in a wacky costume (with a killer singing voice), a nerdy “supervillain” in a kid’s Dracula cape, and, I guess, Michael Fassbender in Prometheus(?). They have adventures in space and sing some not-so-memorable songs about them. There are lots of jokes that hit on basically every corner of fandom. There are lots of really dirty jokes too. It’s fine. Really not my thing but fine.

All KIDding Aside (B-)
Christel Bartelse’s latest solo show is bravely confessional and brazenly silly. It’s about not wanting then maybe wanting then not wanting again then definitely possibly wanting then maybe not being able to have kids. Bartelse tackles the ridiculous check list pressures of modern adulthood with fun insight but the show is ultimately nothing we haven’t seen before.

King of the Castle (C+)
The cast of this muddled dark comedy about the voices inside one very-messed-up man’s head is pretty good considering the weak material. Jada Rifkin is particularly memorable as fiery troublemaker Pepper who represents all Gordon’s darkest instincts (mostly revenge-based) and Olivia Clarke carries much of the play’s emotional story as Lucy the dream girl adolescent Gordon thought up to fulfill his every fantasy (the psychological implications of that role are worthy of the leading part in a much better play). Alas, despite bringing the audience into his inner-most thoughts, King of the Castle never really shows us who its main character is. Gordon is an ill-defined generiman who seems like a mess but has no real discernible personality. Good ideas are there but this script needs a ton of reworking before it makes enough sense.

Like a Fly in Amber (D)
There’s a moment in Like a Fly in Amber when a character calls Shakespeare’s plots “sappy and amateur”. Such bold accidental irony is hard to find. This sappy musical about a 60-something daughter and her dying mother is decently well sung by two very sweet ladies who seem to have wandered onto a professional stage from church choir practice. The acting is terrible but it’s not as if the script is gold; the story is trite, the dialogue clumsy and the songwriting pedestrian. A real shame considering the incredible earnestness of everyone involved.