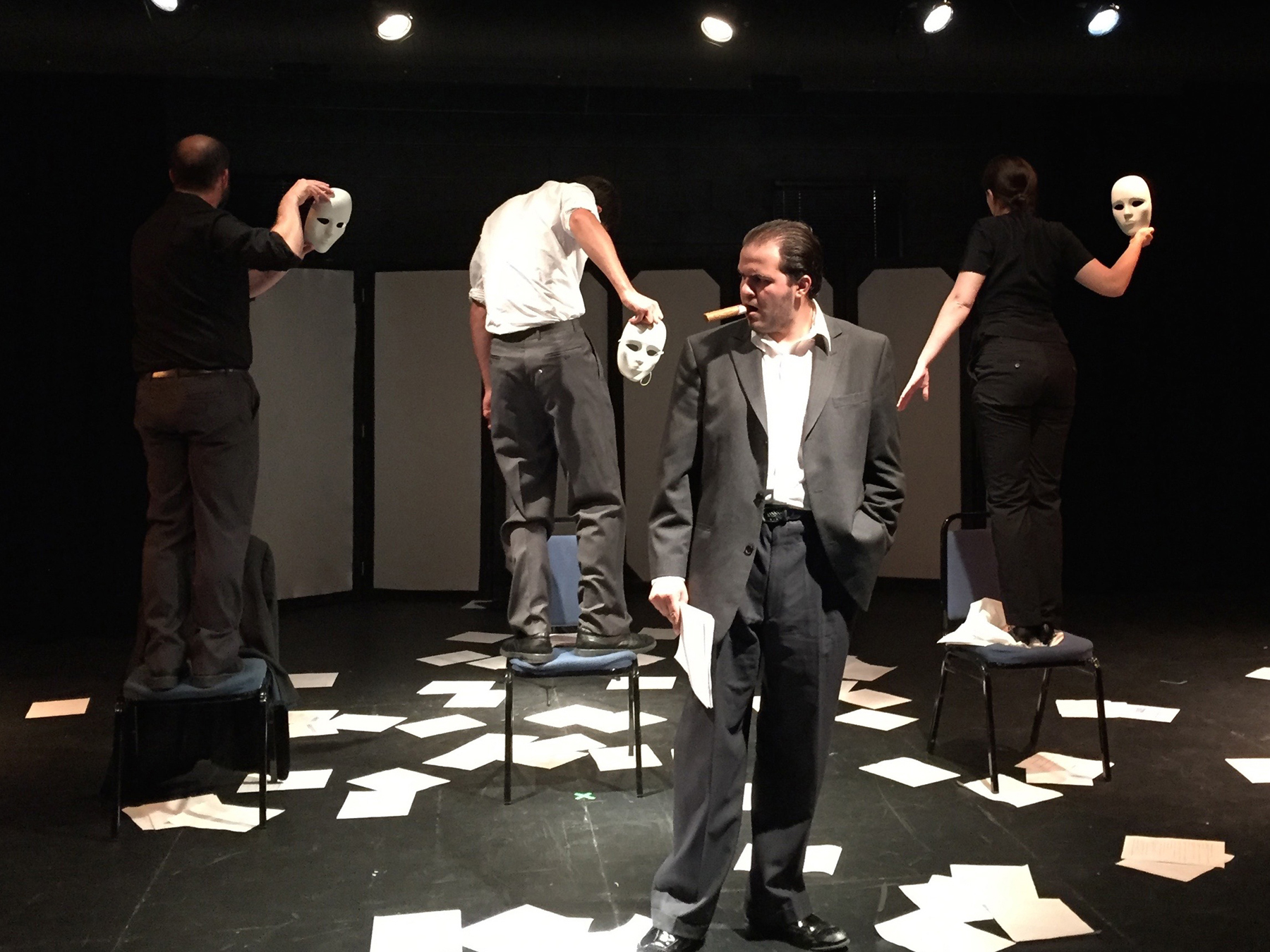 Orson Welles/Shylock (A)
I’m sad that this show fell on the last day of my review schedule because I want to tell everyone that they should see it. Written by Matt Chiorini, this fantastical biography of film & theatre legend Orson Welles and his lifelong quest to play Shakespeare’s Shylock is inventive, moving, informative and entertaining. Performed by Chiorini and three other actors who trade off playing the titular mad genius over the course of his life, Orson Welles/Shylock is that rare semi-docu-show that captures the complexity of a real person from many contradictory angles. Drew Gripe as the young Orson up through the Citizen Kane years makes a strong impression playing the gifted but over-praised young man with a wink and unflagging confidence. The smoothest of transitions grows Orson up from his Gripe incarnation to the more guarded, more tyrannical version embodied by Vincent Randazzo who comes closest to capturing the infamous figure in his most familiar form. I would call this a must-see show but, sadly, there are no more opportunities to see it at the Fringe. Keep your eyes on this space for tour information.

Echoes (A)
My favourite musical at the festival, Andrew Seok’s beautiful song cycle about the love and loss that links our war stories together is haunting, personal, complexly written and smartly framed by a simple, effective device of a postman (Jeff Madden) delivering letters to far-away loved ones. The cast is absolutely top-notch, the only musical ensemble at the Fringe who never sings a weak note, highlighted by Madden, Seok himself, and the earth-shattering Nickeshia Garrick. I cannot wait to see Echoes remounted with a full production; I’m sure that’s not far off.

Life After (A)
Britta Johnson’s excellent new musical Life After didn’t hit me as hard as Echoes but it’s very clear why it’s one of the most popular productions at the entire festival. Johnson is one of Canada’s best young composers and she is the lone creator this year to truly succeed with a full book musical. The songs are delightful and full enough to warrant many listens and they serve the story perfectly. The cast is mostly good with a few iffy high notes here and there but standouts Kaylee Harwood, Alana Hibbert and Kate Blackburn are strictly wonderful. The composer’s sister Anika plays the leading role of 16-year-old Alice with excellent vulnerability and, though none of the cast’s ages make any sense, she strikes the right teenage balance of selfishness and innocence. There will definitely be more life for Life After, hopefully in an expanded, full-length form that lets Johnson delve even deeper into her characters, what led them here and how they’ll move on.

Like a Generation (B+)
This collaboratively produced show about growing up in a darkening world took me by complete surprise. Though it grapples with darkness, it ultimately reaches pretty kind conclusions about humanity, an increasingly rare and very welcome quality. Coming of age in the time that I have, I’ve been taught to expect a dark turn from creator/director/playwright Blue Bigwood-Mallin‘s kids entertainer Mr. Flowers but none came. There’s some sadness to him, a little enigmatic curiosity, but he’s mostly good, his biggest crime being a desire to stay happy and loved and entertain kids instead of teach them about the issues of their world. It’s a lovely (and eccentrically funny) performance of a lovely character whose lovely world is slipping away from him.

Seaching for Party (B)
The female characters could use some work (the hot redhead with glasses & hot leather boots loves video games; it’s totally hot) but this vignette-style show about gamers has a really big heart and a true love of its subject matter. Aaron Conrad is the MVP of the cast, playing a variety of memorable characters including the most interesting one, username: Shadynasty (pronounced “Shah Dynasty” not “Shady Nasty”) whose foolish dragon-baiting serves as the comic connecting thread between all the scenes.

Waking (B-)
This confusing piece about amnesia has enough moments of real sadness and moving tenderness that I couldn’t help but give it a higher mark than its overall execution and storytelling strength really merit. Employing the technique of then & now casting (like False Start), Waking takes a surprisingly long time to clarify who everyone is and how they’re related and what happened to them to make them so confused. Maybe the lack of clarity was intentional- a thematic empathy device- or maybe it wasn’t.

Women (B-)
I love the concept of this Little Women-meets-Girls show. There’s some remarkable insight to be found in how close the comparison is between two seminal texts about young women from completely different eras, said insights largely being related to how not-so-different the eras are for young women. Unfortunately, Chiara Atik’s script is a simple parody more than anything else. The cast mines some great moments (Shakura Dickson’s Beth is the highlight) but I can’t help but be distracted by all the wasted potential that surrounds this show.

Goodbye to All That (D+)
I appreciate that the company tried to faithfully represent Dadaist weirdness in this play about a deserting soldier, presumed dead, who finds refuge in the Swiss art movement but this production is a mess of noise and vague characters and awkward performances.

Candy & Shelley Go to the Desert (D-)
Nothing went right in the making of this comedy about two friends who are stranded in the desert. The direction is stiff, the acting over-dramatic, the costumes tragically ill-fitting and the story basically non-existent. There was one monologue that hinted that Candy and Shelley’s friendship might actually be complicated territory worth really exploring but this play does not do that.