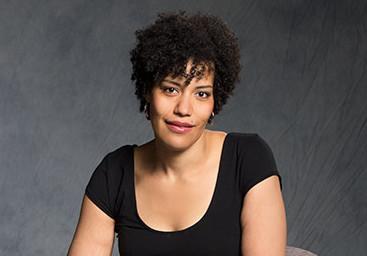 Back in 2012, Alana won the My Theatre Award for Best Supporting Actress in a Musical for her stunning turn in the Shaw Festival’s production of the musical Ragtime. In 2014, her jump to straight theatre was met with thunderous applause with the triple threat showing off superb acting chops as the mysterious maid in Katori Hall’s transcendent two-hander The Mountaintop opposite fellow nominee Kevin Hanchard. In the process, she became a rare musical performer nominated for Best Actress in a Play.

Can you remember your first experience with theatre?
I was six years old and saw a production of Oliver! I remember being so jealous of the kids on stage and wanting to be up there with them so badly!

What actors and actresses have always inspired you? Are they the same today?
Audra MacDonald, Julie Andrews, James Earl Jones, and Phylicia Rashad are some of my favorites, off the top of my head. I’ve loved those ones for a while.

Where did you develop your triple threat skills?
I went to school in Victoria at the Canadian College of Performing Arts. The focus was definitely on musical theatre. Since then, continual professional development has been very important. I try to attend weekly singing lessons and take acting classes and workshops when I can. Also, being in rehearsals with some seriously talented people and watching how they work has been huge in terms of learning. I’m lucky that many of these talented people are also some of the most generous with their experience and knowledge.

Tell us about your breakthrough role in Ragtime.
Playing Sarah in Ragtime was a dream. It’s definitely one of those bucket list roles. I had seen the show when I was in high school and have been a huge fan for years. It was so special to get the opportunity to play that role in that particular production with that particular cast at the Shaw Festival.

What was it like working with Thom Allison on that show?
Thom is fantastic! We had met in passing before Ragtime, but had never worked together and didn’t know each other well. The first day of rehearsal he invited me out for dinner on Valentine’s Day and we were fast friends from that moment on. It was a warm and collaborative partnership. He is at the top of the list of the talented, generous people I was referring to.

In 2014 you made the leap from musicals to straight theatre to play your My Theatre Award-nominated role in The Mountaintop. Was that a move you’d been looking to make for a while?
It’s a move that I had been looking to make and the chance really rose out of having the gift of spending multiple seasons at the Shaw Festival. There were so many opportunities to inch my way in to the straight theatre world: I understudied in the plays, participated in the Director’s Project, and got involved in various grass-roots initiatives. Jackie Maxwell is so incredibly supportive and encouraged me with smaller non-musical roles in the plays and by casting me in various workshops and readings.

There’s a massive twist surrounding your character late in the play and to spoil it is to ruin the show. Did you have a hard time telling people about your part without giving everything away?
I would speak in very general terms when talking to people about the show and my character. I didn’t want to give anything away because the twist is so cool. I’d tell people to just go into the show with an open mind. My mom was particularly shocked. She came back 3 more times in the next week to see if she could have predicted the twist!

Can you remember one of the key conversations you had with director Philip Akin about your role?
Philip is so great in that he offers lots to think about and is really open to hashing out the details. I remember a conversation that really made an impact that happened in about the 3rd week of rehearsals. We were discussing the idea of redemption and how the stakes for Camae are literally life and death. It was in this conversation that I realized what I admired most about the character: her resilience to keep on fighting.

Your co-star Kevin Hanchard’s career has taken off with the success of Orphan Black. What was it like working with him on his return to the stage?
Kevin is so quick and so open to absolutely everything. His level of detail is incredible as is his ability to stay focused and in the moment. An hour and a half on stage with him seemed to fly by, it always felt alive and breathing. He’s also one of the kindest and funniest people I’ve worked with.

How aware were you of the sensitive territory you tread when telling a fictional story about a legendary but very real man?
There is a lot of discussion around this play in how it seems to be an attempt by Katori Hall (the playwright) to “humanize” Martin Luther King Jr and drive through the hagiography and legend that has been built up around him. King is such a revered figure both personally and politically, so my awareness of this aspect of him was always present. But there was also something quite liberating in always being conscious of the fact that The Mountaintop doesn’t intend to be an accurate or true-to-life account of King’s last night on earth. It was an opportunity to explore this incredible what if: What if one of the most powerful, celebrated leaders of our time was stuck in a room with the seemingly least powerful, un-celebrated person you can think of? Where might the common ground lay? What might they talk about?

How do you feel The Mountaintop fits into that legend and the many artistic expressions of it?
I think, that The Mountaintop is very respectful of Martin Luther King and ultimately celebrates both the man and legend.

Do you have a favourite moment from the production?
Towards the end of the play, when King would try to dial his wife on the phone and she doesn’t pick up – Kevin broke my heart every night delivering the speech about buying Coretta the artificial flowers.

Being a part of a Shaw Festival/Obisidian Theatre Company co-production, you had the rare opportunity of doing two different runs of the same show. How did the Niagara and Toronto runs compare? Did the show or the feeling of it change at all?
It was really great to do the run in two completely different venues. The Aki studio is smaller and more intimate than the Studio Theatre at Shaw so we had to readjust a few technical things. Toronto audiences were different than Shaw audiences as well. I thought audiences in Toronto would be more vocal than Shaw audiences, but actually it was the other way around.

What’s your favourite role you’ve ever played?
I don’t know if I have a favourite…I loved both Sarah (Ragtime) and Camae (The Mountaintop). Dottie (Caroline or Change with Acting Up Stage/Obsidian) was pretty fun as well.

Do you have any dream roles you think are perfectly suited to you or something completely against type you’d love to try as a big challenge one day?
I’ve always wanted to do a Sondheim musical. Into the Woods is my favorite and I’ve always wanted to play the Baker’s Wife.

What are you up to now/ what’s next?
I’m currently across the way at another big festival in Ontario, and am spending the season at Stratford. I’m back in musical land again playing Nettie Fowler in Carousel and appearing in The Sound of Music.