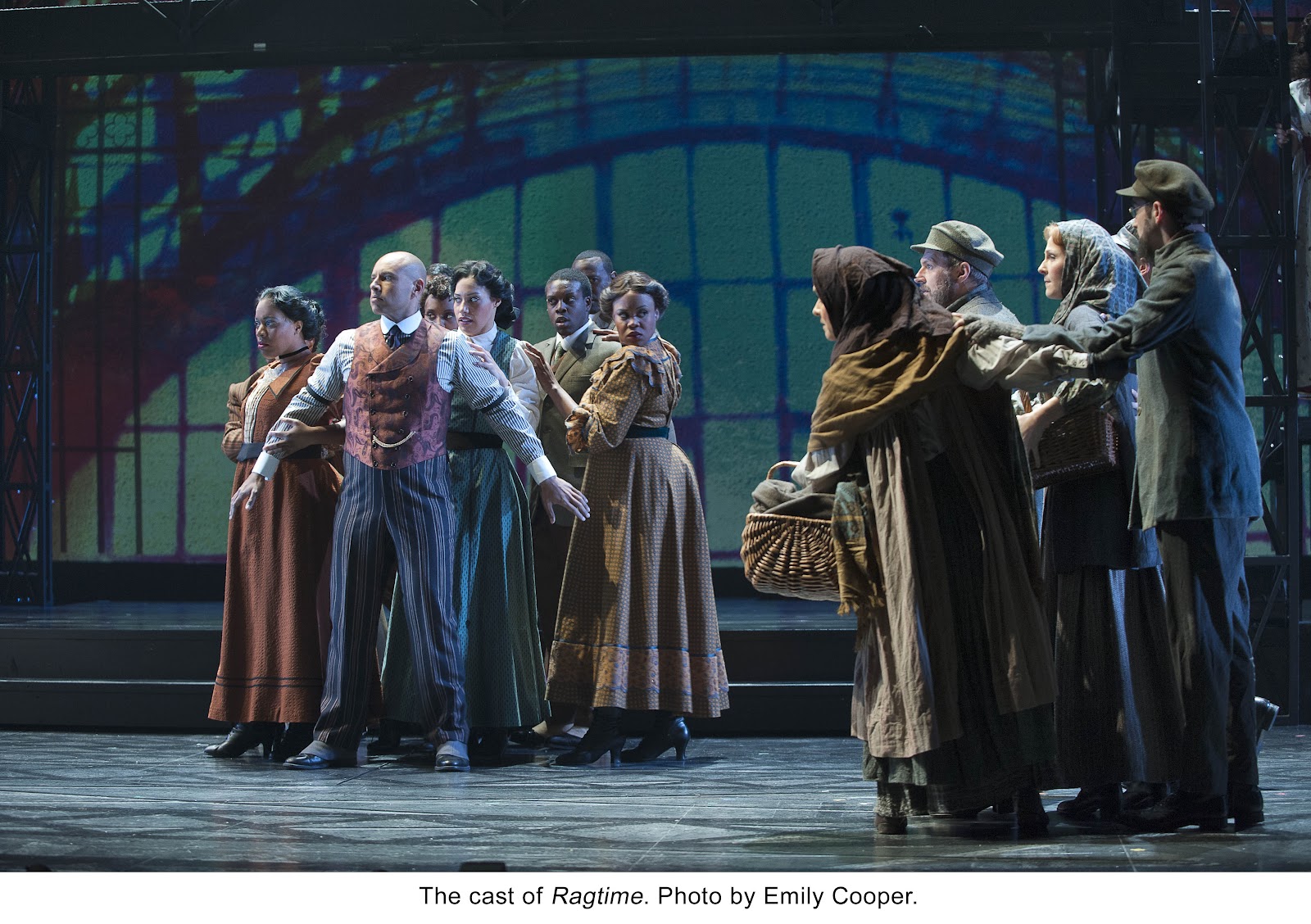 At the Shaw: Ragtime

By now I’m sure you’ve read all about how great Ragtime is and may be expecting me to disagree. I’m not going to. In fact, I’m going to pile on.

No hyperbole here, I promise… Ready? Okay: I have literally never seen one of the festivals (Shaw, Soulppeper, Stratford) pull off a musical nearly as well as Shaw has this season with Ragtime. Jackie Maxwell deserves her props on this one. Well-selected, well-cast, well-executed, on Shaw’s end there’s very little to criticize in Ragtime (not that I’m not going to find something, just you wait ‘enry ‘iggins*).

If you’ve never seen Ragtime before, there are some things you need to know. First of all, the music is gorgeous and HARD. It will steal your heart and carry you away and likely be breathtaking and underwhelming at different points throughout any given production (when sung with flawless technique and performance- breathtaking; when sung by a character actor who underestimated Stephen Flaherty? Underwhelming. There will be a bit of both no matter where you see it). The story is evocative and complicated and touching, but it’s also a little over-complicated and there are lots of structure issues that make it next to impossible to stage perfectly. The frame device is strange and intrusive and likely will leave you wondering why there’s a magical psychic boy and most of the white people are simply called “Grandfather” and similar things (“Mother” is a lead character- can’t we just call her Betty?). The characters are mostly fascinating beings, but it’s a huge cast and some of the more superfluous characters muddle more than ameliorate the plot. The characters who are not superfluous sometimes do crazy things with very murky motivation (*spoiler alert* Sarah literally buries her still-living baby in the ground. Huh?). It’s an extremely flawed piece but, with the right cast, the beauty of the story and the loveliness with which Ahrens and Flaherty (if not book writer Terrence McNally) convey it can’t be missed.

The acting company Shaw has assembled for Ragtime is exceptional with very few weakpoints. Benedict Campbell doesn’t bring much to his role as Father, though he does bring his fairly weak singing voice that always has me wondering why they keep him in the musical company. Patty Jamieson starts out vocally so-so then gains traction as she moves further into the piece, even pulling out particularly strong vocals later on. Acting-wise she exudes kindness and really grounds the action with strong footing. Jay Turvey plays Tateh with real warmth in act one and he and Jamieson develop remarkable chemistry early that they need to pull off act two. Turvey is so lovely from the moment we meet him- strong, determined, protective, understanding- that even when he’s a big shot later on it’s easy to see the act one character underneath, especially when he reconnects with Mother.

The big “get” for Shaw this year was Thom Allison as Coalhouse and he doesn’t disappoint. In fact, he exceeded my expectations since I was skeptical after not loving him as host of the Dora Awards earlier this summer. Allison nails Coalhouse’s outrageous vocals, obviously, but he also brings a defiant pride to the role that defines the character perfectly and sets him up for his act two tragedy even when he’s just playing his act one love story. The biggest delight for me was seeing Alana Hibbert finally in a role that deserves her. A standout in tiny roles in recent years, Hibbert shot straight up the ladder landing Sarah (Ragtime’s most famous role, after Coalhouse). Her voice is astounding and she plays Sarah beautifully, to the point where I was actually devastated alongside Coalhouse at the climax of her story, sent into intermission speechless.

Led by Allison, Jamieson, and Turvey in the lead roles, the cast as a whole shines (with newcomer Brandyn McKinson shining brightest among the chorus) and Ragtime, a Huge musical, is pulled off against all my expectations by Jackie Maxwell and The Shaw Festival. A stunning achievement.

Ragtime plays at The Shaw Festival Theatre until October 14th.

*see what I did there? I referenced last year’s big Shaw musical- the bird-filled letdown that was My Fair Lady.