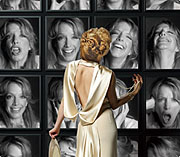 At the Shaw: My Fair Lady

My notes on The Shaw Festival’s production of My Fair Lady contain only one word: “Birds!!!”. The reason for this is that there is very little to director Molly Smith and set designer Ken MacDonald’s interpretation apart from the far-from-novel metaphor of birds and bird-related things (various “spread my wings” themes and such- get it?!) Lerner and Loewe’s classic musical gets an energetic staging that is as entertaining as it is uncreative but even in its deepest moments I couldn’t help but laugh at those damn birds. They fly through the scenes along the animated backdrop, they chirp their way through the soundscape, they feature in set-dressings, props and hair pieces, their cages even descend from the ceiling to indicate that we may now be in Mrs. Higgins’ house but the metaphor isn’t to be forgotten (if that were at all possible).

Attempting to upstage the birds is a cast of some of the Shaw’s most valuable players. Benedict Campbell is a wonderful Henry Higgins- sauntering and condescending through his social experiment with great narcissistic ease. Patrick Galligan is similarly good as Colonel Pickering- charming and trustworthy and an appropriate sort of a pushover. Neil Barclay seems to be having a ball playing Alfred Doolittle, something that easily rubs off on the audience desperate to dance alongside him.

Deborah Hay, so wonderful in Heartbreak House, however, makes Eliza Doolittle even more obnoxious than she generally is. The squawking is one thing but the whining! I’m fairly certain you’re not supposed to side with Higgins as he insults Eliza’s class and flinches at her every word- but I was right there with him, wishing she’d just shut up, even after the “Rain in Spain” breakthrough.

Mark Uhre, on the other hand, I wished would never leave the stage. My new favourite musical man, Uhre managed to catch my eye with a tiny role in Parade last winter and at the festival this summer his two romantic leads solidified his place in my heart. He’s versatile and charming, playing Freddy with his mandatory love-sickness but far more spine than is standard. His rich voice soars over the rest of the cast as he achieves the next to impossible feat of making Freddy the production’s standout character.

It should also be pointed out that Judith Bowden’s costumes are sensational.

Oh, and there are lots of birds; which is, you know, kinda stupid.

My Fair Lady plays at the Festival Theatre in Niagara-on-the-Lake until October 30th.