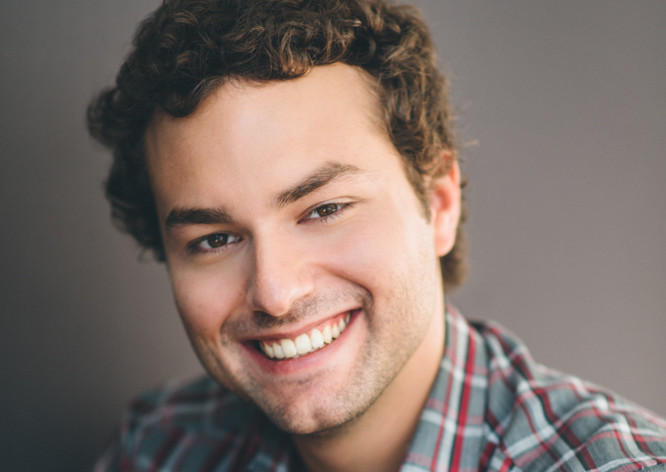 The titular man in A Man Walks Into A Bar, the Outstanding New Work-nominated Fringe play by Rachel Blair, is really two men, or more than that, in some way he’s every man, an everyman, and no man in particular. It was Blue Bigwood-Mallin who had the daunting task of capturing all of that ambiguity while staying grounded and approachable but also kind of threatening but not actually threatening and incredibly charming but also somewhat sketchy and totally innocent but not really innocent and so many things all at once.

We talked to the Outstanding Actor nominee about the complexity of the role and how it changed his perspective on men, women, and walking into bars.

Can you remember your first experience with theatre?
I started with the Shadowland Theatre Troupe on Toronto Island. For my first role I walked around on stilts dressed as a fish as part of one of their community productions.

How did you develop your skills as an actor?
I performed in various small bits through grade school, high school and into university but I think I developed most as an actor over my time spent at York. My focus was mainly on movement-based theatre techniques and only after York did I begin pursuing more classical styles of acting in serious way.

How did you get involved with A Man Walks Into a Bar?
I was asked to audition by the show’s director, David Matheson, and was lucky enough to get the part.

Your character is specifically described as a “normal guy”. With most roles you’re looking for what makes someone unique, how did you approach basically doing the opposite?
Well, I think the ‘normal guy’ character of Man is actually more unique than a lot of the eccentric roles I’ve done in the past. A lot of my work on the man was really focused on my own personal emotional experiences of masculinity and I think investigating the depths of that facet of my personality gave me a ton of attachment and complexity to this ‘normal guy’.

There are many incarnations of “The Man” in this play, including the man in the frame device hearing the joke and the many versions of the man in the joke, who changes as the story gets revised along the way. What were some of the subtle changes you made to differentiate these different angles on the same “normal guy”.
There’s quite a lot of differences between the two men (the one in the joke and the one on stage) and these change over the course of the show. Things like intelligence, physical stature and opinion all factor in (the man on stage is generally smarter and more opinionated than ‘Steve’ in the joke). But I would say the biggest difference that develops between the playing of the two men is their relationship to the woman. Changing from friend to lover to adversary and finding the moments and intentions in these transitions gives both men a very different feel and have always helped guide me between the two characters.

Rachel Blair is also nominated for a MyTheatre Award this year for writing A Man Walks Into a Bar. Tell us about working with her as both playwright and co-star.
It has been fantastic working with Rachel and it has definitely influenced the way I approach my own work. She is enormously talented as both a writer and actor. It’s always a joy to perform with her on stage and I’m constantly impressed with how easily she is able to do both jobs during the rehearsal process, not to mention producing on top of that.

How did having the playwright in the room affect your experience with the text? Were you hyper-aware of how personal a story it is for her?
Having the playwright in the room was very beneficial, as there was never any question about what the intent of the script was. The show takes a lot of trust to pull off effectively and in the early stages that was a major focus. We all spent a lot of time discussing the issues at play before we could really get into the meat of the show. To be honest I think I would be hyper-aware performing this show with anyone. There are a lot of contentious issues linked directly to our personal identities as men or women and that’s what makes the show so challenging and rewarding. Luckily I had a fantastic co-star and crew, which actually made everything feel easy despite the challenges.

A Man Walks Into a Bar is meant to highlight a phenomenon many women experience on a daily basis and many audience members (myself, a woman, included) found it really eye-opening. Did the play surprise you at all or make you see situations with a different lens than you might have before?
Absolutely. My experience on this show changed a number of perceptions regarding gender and the ways I approach my own masculinity. While I had spent a lot of time studying feminist theory and worked in the service industry I never fully grasped the day to day dynamic that plays out over and over again that the show articulates. Once I noticed these things it became impossible to ignore and has had a profound impact on my interactions with both women and men.

Did the script change throughout the rehearsal process?
Only minor tweaks. The largest changes came through cuts made to ensure we would fit within the hour time slot for Fringe.

What would you say is the most important conversation you had with director David Matheson in developing your interpretation of the character?
All of them. But I think primarily everything centered around male expectation in this scenario. He really pushed me to find the love for the women and the frustration when things don’t go my way.

Did you have a favourite moment in the production?
Before every show during Fringe, me and Rachel would meet up early and run the entire show in a parking lot next to a dumpster. Seeing the expressions on the random people walking by or poking their head out of their apartment windows as we argued and warmed up was always fun.

What’s your favourite role you’ve ever performed?
My role in A Man Walks Into A Bar has definitely been one of favorites but apart from that there’s a small sketch I do involving a nervous accountant auditioning for Julliard who just wants to dance. His name is Herman and he’s always a blast to perform.

Do you have a dream role you’d like to play one day?
I’ve always wanted to play Trigorin in a production of The Seagull.

What are you working on now or next?
I’m in Ottawa performing A Man Walks Into a Bar as part of the Undercurrents festival [on stage until Feb 20] and getting some preliminary work done for a show I’m directing as part of the Fringe Festival with my theatre company Coyote Collective.

Do you have anything you’d like to add?
A big thank you for the nomination and to my cast and crew for being so incredible!