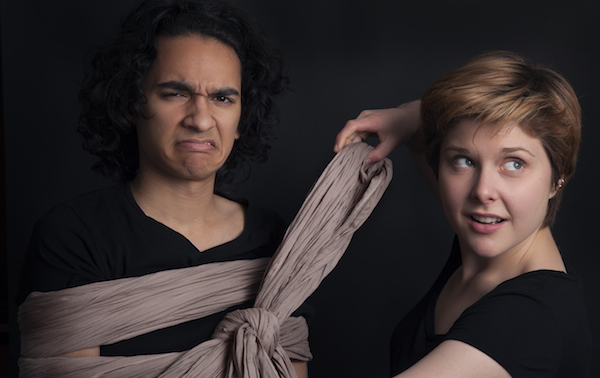 Knots (A)
It’s a big task keeping an audience engaged at 10:30pm but Lucy Meanwell and Jake Runeckles have no problem doing that whatsoever in their show Knots. You might think a show about a topic as broad as knots sounds too experimental – more like a clever university project. But what’s surprising is that they treat the subject with great care, using physical theatre and clown amongst other genres to delve into the physical and mental connotations of knots.

The piece has a clear rhythm to it. We start off with a physicalization dedicated to anatomical knots. Runeckles is linked to Meanwell by way of a long scarf. They explore the pervasiveness knots can have on our bodies, unraveling and gathering again. “Have you ever had a knot in your stomache?” he asks audience members. The two represent individual particles that co-exist and cannot ever truly separate from one another.

The most hilarious moments of comic relief are when a voiceover requests the pair – as clowns – create a specific type of knot in order to avoid their death, and they frantically succeed together against all odds. They even get a little frisky discovering their sexualities. The audience roars with laughter. It’s like we become kids and teenagers again.

The co-creators naturally cannot leave out relationship knots. Their more poignant dialogue addresses the difficulties of living with someone in a monogamous long-term relationship, and whether to have an abortion or not.

Finally, Runeckles bravely steps into the audience and invites us to hold hands and maybe even get to know each other more after the show. Networking too is a complex knot!

Knots is a heart-warming piece, and it’s commendable to do this kind of work at the Fringe especially as theatre students. The two have such fantastic chemistry. I marvel at what other themes they might explore together!

Rowing (B+)
Playwright Aaron Jan has been busy directing more than one show at this year’s Toronto Fringe. Rowing is a funny engaging look at what happens when a sports team experiences a sudden unexpected loss.

Teammate’s deepest darkest secrets begin to emerge in this wild ride. We are in an old community centre basement, accessed from a Kensington Market back-alley. It’s supposed to be a victory celebration, doubling as a fundraiser for Jake’s (Madeleine Brown) dad’s heart charity. Instead the actors sulk in the space with – ironically – party hats on as audience stumbles in. The stakes shift multiple times from high-low. The characters break the fourth wall by cracking jokes such as their “party” being “immersive.”

All the performers are very dedicated to their characters whom must navigate some tricky dialogue and scenarios. However, it’s Mark (Anthony Perpuse) as Westdale’s team captain who captivates us most with his passion for the watersport, and the conjuring up of his grandfather – who immigrated from Vietnam and became a rower – to inspire teammates. This casting appears to be an improvement from when we last reviewed this piece. Brown still plays very young, but it doesn’t bother me. Perhaps it’s because she’s got the geeky male persona down pat. Jake’s never-been-kissed character exudes empathy for others even as he tries desperately to make this party work.

The play lulls in the middle for quite awhile after we discover an opposing team’s player is holding Mark hostage. After forty minutes or so of banter you kind of wonder how this will all resolve itself. Mark is put on the back burner, it seems, as players deal with their own personal problems including an abusive mother and depressed father.

All in all, though, Rowing is an entertaining piece of theatre indeed, and appropriately staged as a site-specific alternative venue piece.