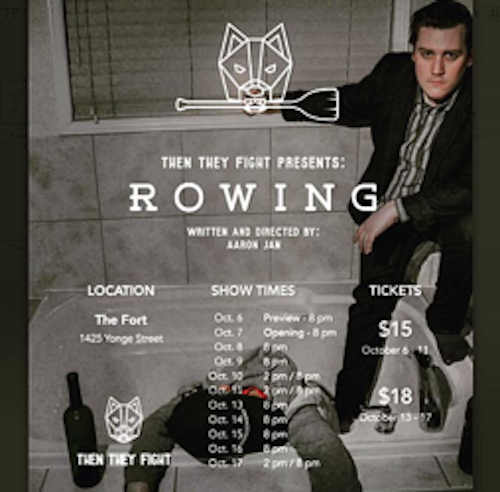 On Stage in TO: Breakups & Other Pain

Rowing (Then They Fight)
Writer/director Aaron Jan’s new play about a small town rowing team sports a strong cast delivering well crafted quick-pace dialogue. Each individual arc is, for the most part, clear and engaging, especially those of the contrastingly lovelorn Chris and Rick, played with great pathos and excellent timing by Lauren Griffiths and Andrew Markowiak respectively.

In one of two baffling casting decisions, adult woman Madeleine Brown makes her second appearance this fall as a male child, delivering the sort of broad strokes performance one would generally expect from a adult woman playing a male child (who is said in the text to be 18 but is played as about 13). Zach Parkhurst fares much better in the production’s other strangely cast role, deftly balancing enough vulnerability and intensity as team captain Mark to distract from the fact that he’s a white actor playing a character of Asian heritage (a throwaway line is added early in the script to justify this awkwardness but it’s not quite enough).

Designer Aram Heydarian has effectively transformed a tiny backroom down an alley just off St. Clair to reflect the scummy hotel room where Jan places his miserable characters and the company smartly sends out an actor to escort the audience down the sketchy path to the hidden space (but don’t be fooled by this gentlemanly introduction, Francois Macdonald transforms mid-evening into an effectively hate-able villain; you should be more careful about who you let walk you down dark alleys).

Some of the key background information gets missed in Jan’s quick script (it took me awhile to figure out that our underdog heroes are actually usually winners) and the resolution comes a bit too easily but the characters are engaging enough to make Rowing a trip worth taking.

The Art of Being Alone (Moose + Moa Theatre Company)
Written and performed by Stephane Garneau-Monten and directed by Isaac Robinson, The Art of Being Alone is a one-man comedy about recovering from a brutal breakup. With more energy than any recent dumpee I’ve ever encountered, Garneau-Monten guides the audience through his stages of grief (heavy on the denial) with the help of title cards and long detours into absurdist fantasies. It’s a strong concept rooted in one of the world’s most relatable traumas but the execution is too broad and Garneau-Monten struggles coming down far enough in his quieter moments to really show us the extent of his hurt.