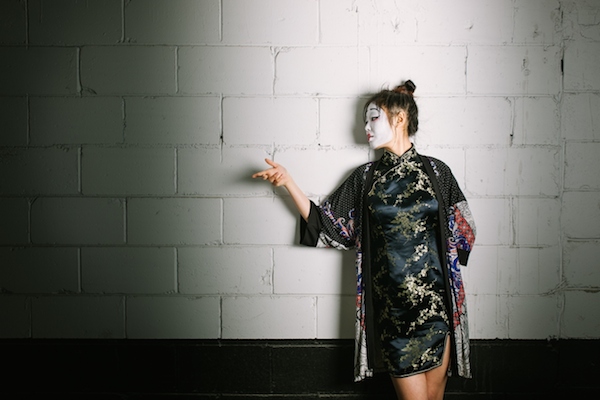 Silk Bath (A)
Silk Bath Collective (Bessie Cheng, Aaron Jan, and Gloria Mok) assembles what is a very unique piece for a Fringe festival. In fact, it’s not often you can see a show in Toronto performed in Mandarin and Cantonese at all, unless, perhaps, on a big stage or in a cultural showcase. As the creators put it, they are featuring the stories of their Chinese community found inside their “skin” and in the language most accessible. Throughout the show they give authentic voice to common immigrant stories.

The concept is also most original: various characters (players) compete to culturally assimilate, in a game. A video game! The characters attempt to fit for acceptance – metaphorically – earning “points” by following rules and answering a cyborg’s questions. The “rulebook” is meant to make them model citizens but, of course, where you have rules you have those ready to break them. Why try to fit in if it means a life of perpetual misery or shrewd conduct just to keep face? Clementine (Dorcas Chiu), for instance, represents the optimist, the independent thinker: she holds nightly meetings with her “cellmates” to devise a plan for escaping and forming their own “nation.” Their reward for attendance is the orange fruit, of course. The Old Lady (Amanda Zhou), on the other hand, plays by the book despite having been in the game the longest while yearning her lover who supposedly awaits her. Will he actually be waiting on the “outside?” Has she missed out on life by fighting for the impossible? New Girl (Bessie Cheng), like any newcomer, must struggle to find her way and is very dubious of Clementine’s intentions. Then there is Mutt (En Lai Mah), who represents the deviant: he fakes not speaking a word of the mother tongue in order to get ahead. As the only male, it makes a statement when he succeeds his counterparts in becoming the winner. But his win sends the Old Lady into a violent rage.

The cybernetic world is made most convincing by the compelling sound design (Kevin Feliciano) reminiscent of popular video games. When the competitor’s gain points, in fact, a familiar sound is accompanied by a character’s action and we can actually imagine Mario Kart like symbols appearing above their heads. The answers are deemed correct the closer the players position themselves to cultural stereotypes. In addition, Feliciano’s bilingual projection design – integrated flawlessly into the piece – makes it easy for English speakers to understand what the players are saying in Chinese, and vice-versa. Less palpable is if anyone ever makes it out. Can we ever be truly free of cultural typecasting and labeling? The shocking finale alone is worth it! Audience members were unsure if they should leave the theatre or not!!!

That Joyce Girl (A-)
Novelty reigns at the 2016 Toronto Fringe. Kate Cattell-Daniels is absolutely captivating from start to end as she tells the unfamiliar story of James Joyce’s daughter, Lucia. It is both intriguing and tragic, and it is exciting to learn all about this fascinating character without having to be buried in dense history.

That Joyce Girl is very topical for our time: unfolding in the early part of the 20th century, Cattell-Daniels portrays the struggles of a young women trying to find her own creative voice and explore her sexual desires, while being confined by the male gaze and societal expectations. From Women’s rights movements to Black Lives Matter, one has to question how far we have come in the fight for equality.  Women can vote and hold positions of power, but do we view women as equal?

In any case, Lucia offers us an example of a most creative soul who longs to be herself: an expressive dancer and free-spirited women.  The entire world seems to be against her.  Emphasizing this is the excellent design (Brittany Miranda): a circle of book stacks and papers that enclose Lucia in her “fishbowl” from which she may never emerge alive, and her offbeat scaly leotard which, for better or worse, definitely, makes her stand out. “Some say I’m a slut.  I say I’m alive,” she proclaims in one of my favourite lines of the show.  It may have been effective if some of the stacks were reinforced to act as a set piece or replaced with seating of some sort since Cattell-Daniels often played upstage alongside these areas, appearing at times to want to sit down and storytell, but couldn’t.

While Lucia may be doomed to suffer a bad fate, I hope that this solo show goes on to embrace many festival stages.

Exit (B+)
It’s hard to imagine Exit began as a university theatre project among peers at the University of Guelph. Written and directed by Will MacKenzie, its characters, scenes, and staging are all quite strong.

Not a lot of shows dealing with the subject matter of technology and the connection-disconnection conundrum take such an honest look at both sides of the topic. When does engaging in the cyber world become isolating, addicting even? Onstage, Will (MacKenzie) articulates glowingly how he first got into gaming and made long-standing relationships with people all over the world. Further, he wonderfully demonstrates how music can completely alter the tone of a video while showing an eagle attacking its prey to a Jaws-like track, then – more cheerfully – seemingly urging its mountain friend along to the sound of some pop-rock hit. His best friend and mundane security job boss Dave (Nigel McInnis) points out how the frustrations of teaching the older generation how to use a computer, and how some may lack the “dexterity” to surf the net properly. Will’s girlfriend Angelica (Gabriella Sundar Singh) is as equally wrapped up in her iPhone and work, despite being much more conscious of her boyfriend’s slow demise. She seems rather emotionless kissing him on the cheek, rather than the lips. Things quickly spiral downhill as Will looses his job and, then, Angelica too.

The two media screens upstage left and right never felt extraneous as they portrayed with rhyme and reason the pivotal aspects of what the actors viewed (online) while gazing outwards towards the audience.  This show could work well as a larger fully-fledged production provided it develops the ending scene more. The piece ends abruptly. MacKenzie’s character lacks the impulses to react much at all to his crumbling life. One begs to know what will become of him. Will he ever resurface from his gaming addiction? Will he pursue a dream job where he can make use of computers for a living?