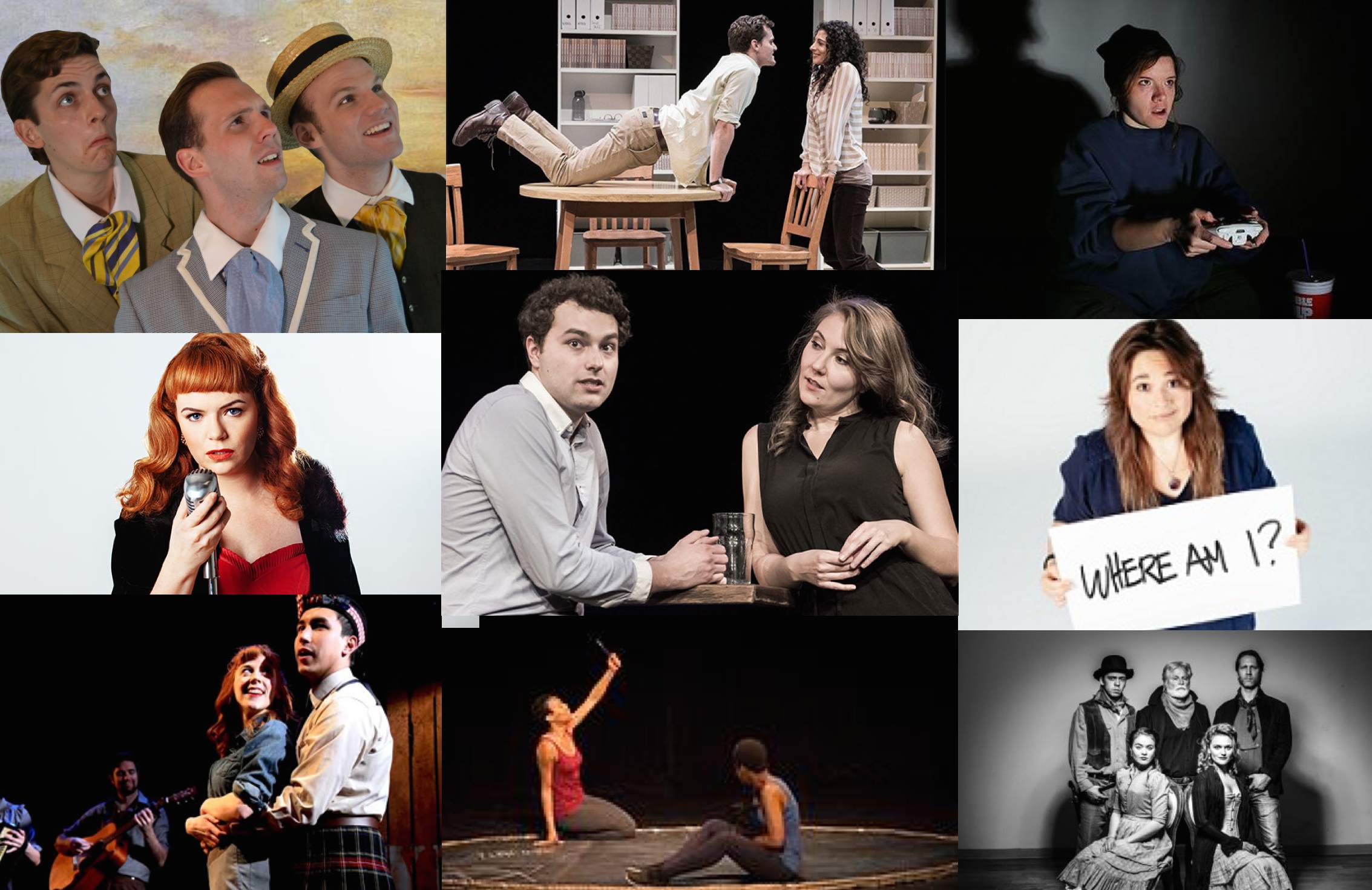 There are six days left in The Toronto Fringe’s annual Next Stage Theatre Festival. See below for my thoughts on nine of the ten shows (the performance of Urban Myth I was scheduled to attend was cancelled because of a fire alarm) then Click Here to buy your pass and schedule your trip to the Factory Theatre and that over-crowded, blessedly heated beer tent.

Mockingbird (A)
There’s often one show in the lot at Next Stage that feels bigger than the other nine, more polished, like it belongs in a well-funded company’s season more than in a festival run by the Fringe. Mockingbird is that play this year. Written and directed by Rob Kempson, this excellently constructed ensemble dramedy explores the helplessly muddled line between right and wrong as navigated by a group of high school teachers when a scandal puts one of their careers in jeopardy. The impressive ensemble is highlighted by Kaitlyn Riordan as a heartbreaking young woman whose moral rigidity eclipses her compassion and Paula Wing as the steel-spined English department lifer who dishes out most of the play’s many big laugh moments (the others come from James Graham as a lothario student teacher and Beau Dixon as the scorned husband who terrifies him). Kempson’s script is complex, hilarious, sad and executed to near perfection with my only two complaints being a lack of naturalism in Esther Jun’s performance and the on-the-nose sloppy youthfulness of Andrew Pimento’s costumes (in contrast, designer Brandon Kleiman hits it out of the park with Wing’s outfits; she’s every English teacher I ever had). Every festival has a must-see; this is it for Next Stage 2016.

A Man Walks Into a Bar (A)
I loved this eye-opening two-hander when it played at the Fringe in July, which is why it’s one of two Next Stage productions currently nominated for a MyTheatre Award for Outstanding New Work (the other is All Our Yesterdays, more on that in a moment). But A Man Walks Into a Bar is very different the second time around, or at least it was for me. Banter that I found charming before I knew the end of The Woman’s joke, when revisited, reveals itself to be steeped in the sort of societal commentary that is most poignant because of how easy it is to overlook. The first time you see Rachel Blair’s small, searing deconstruction of a very typical female existence, depending on your sensitivity level (mine, its worth noting, is fairly low), it can play as a rom-com gone bad with a slow-reveal point to make. But when you’ve seen it before, you’ll see everything from the very start. This second experience felt less complex (I sympathized less with Blue Bigwood-Mallin’s character The Man, which made me feel less conflicted about the play as a whole) but it also felt stronger, with the intricacies of Blair’s text more readily apparent and the layers of her performance as The Woman more defined (her apologetic manner, the defiance in her teasing, the small hints of discomfort that ebb and flow until they can no longer be ignored). A Man Walks Into a Bar is, as far as I could tell, unchanged from the Fringe production but, even if you’ve seen it before- Especially if you’ve seen it before- you should see it again.

All Our Yesterdays (A-)
The other Next Stage play currently nominated for Outstanding New Work was reviewed by one of our other Staff Writers when it played at the Fringe so I was coming at it with fresh eyes despite its MyTheatre Award nominations (including an Outstanding Actress nod for Chiamaka Umeh) and playwright/director Chloé Hung’s inclusion in our Nominee Interview Series. Though I found the pace and clunky transitions somewhat troubling, All Our Yesterdays certainly lives up to the hype, especially when it comes to the performances by Amanda Weise and, especially, Umeh as young Nigerian girls kidnapped by Boko Haram for the crime of going to school.

Heart of Steel (B+)
Wesley J. Colford’s Cape Breton musical about women working in a steel plant during World War II is bright, fun and intermittently heartbreaking. Shining supporting turns by Jan Smith, Mercedes Morris and Rose Napoli elevate a somewhat expected cast of characters and the Bomb Girls-ish plot could use a bit more creativity but the music is beautiful and the heart unfaltering.

Three Men in a Boat (B+)
At the very top of this hour-long farce quite literally about three men in a boat (adapted from Jerome K. Jerome’s travelogue of the same name), an affected Brit named Jay (Matt Pilipiak) tells us not to expect anything all that illuminating from the story he is about to narrate. Rather, it’s clear from the start that this is just a bit of silliness, meant simply to be fun. And so it is. Jay is joined in his river-bound sojourn by George (Victor Pokinko), Harris (Scott Garland) and their dog Montmorency. Nothing all that thrilling happens to them on their trip, but nothing all that thrilling is necessary. Jay, George and Harris are a delightfully wacky trio, plenty engaging though all they’re doing is quibbling over packing technique and lamenting that the whiskey is all gone. The highlight is Garland’s earnest attempt to perform a “comic song” despite his friends’ warnings that he’s terrible at such things. It’s Harris, of course, that is at a loss, not Garland himself who excels throughout the show in the areas of both comedy and song (though, I suppose, never the two in tandem). The three men harmonize beautifully on a series of merry melodies that pepper the show and lead to many of its greatest moments. It all doesn’t add up to much but it’s a delightful hour of silliness.

Stuck! (B-)
Reviewing improv is nearly impossible. Reviewing improv with a rotating roster of performers is even less possible. Based on the opening performance (in which she was joined by Rob Baker to improvise a story about a couple stuck in a wardrobe), Natasha Boomer’s half-hour long-form show seems to be built on a relatively solid foundation. Boomer is a calm performer who doesn’t panic at silence or force hijinks, great qualities that could skew very right or very dull depending on her chemistry with her partner du jour. Alongside Baker, the relationship and world building never quite came together but I could see how on a different night, with a different suggestion, this show could really work.

Blood Wild (C)
There’s nothing really wrong with this western mystery, it’s just kind of dull. Writer/co-director Paul Van Dyck has some great moments of humour and humanity as a side character named Slim but, for the most part, his characters are hard to root for and his pacing drags. The ending twist is pretty solid, though.

From Judy to Bette (C-)
There’s a tricky gap in the musical theatre industry between community productions and large-scale professional productions that leaves a lot of performers a little bit stranded. Budget, rights and technical requirements limit the number of independent companies producing musicals so many of the city’s early-career triple threats end up doing solo cabarets, often using classic songs and iconic impressions. At this point, either your narrative, your style or (ideally) both needs to be perfectly on point to stand out while doing something so many other people are doing. Rebecca Perry’s slapdash “Stars of Old Hollywood” tribute has neither the narrative strength nor the stylistic execution I was hoping for from the well-lauded Fringe star. The half-hour show is broken into four parts wherein Perry plays four Hollywood icons while also playing herself, narrating the very basics of each woman’s rise to fame. The Betty Hutton segment is Perry’s best, focusing her brassy showmanship into comic character songs to pretty strong effect. Her impressions of Judy Garland, Bette Davis and Lucille Ball, however, all leave something to be desired. There’s very little connective tissue between the four women and the lack of depth in the storytelling led me to believe Perry’s choice of subjects really came down to hair colour and what songs she wanted to sing. I need more than that.