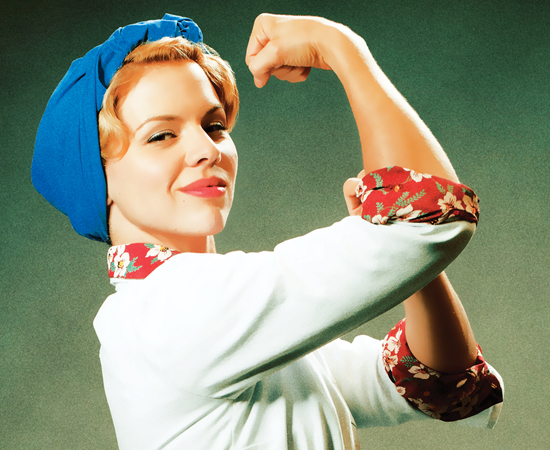 Global TV’s Bomb Girls is easily the best Canadian TV show in years, something wholly original even as it expands into the American market. The breakout character of the miniseries-turned-fullseries is Ali Liebert’s tough and witty Betty- reluctant Victory Munitions poster girl, champion of the oppressed, and victim of the series’ most poignant heartbreak.

We’ve already heard from the series’ lone leading man Antonio Cupo (Marco), but before season two returns with its final episodes starting March 25th, it’s time to hear from a Bomb Girl herself (and Best Actress in a Miniseries nominee). Read on for what Ali had to say about the landmark show and her history-making character.

*Heads up to American fans of Bomb Girls: this interview features season 2 spoilers from where we are in the Canadian run of the show.

When did you know you wanted to be an actress?
I do believe I was 5 years old.  I realized that being the loudest and funniest kid around generally got me the most attention.  Unfortunately, this attention seeking routine got me kicked out Ballet school!  I was one of those kids who lived to perform.  Not much has changed.

What are some of your favourite roles to date?
Betty McRae has definitely been the highlight of my career to date, but there are a handful of roles that are very dear to my heart.  Great characters are like those fast and furious friends you make every once in a while.  You may not know them long, but some leave an impression on your soul forever. I especially enjoyed playing “Sylvia” in Sook-Yin Lee’s film, Year of the Carnivore.  The whole experience was very special to me because the director, Lee, took the time to treat me as an artist and someone who was contributing to the story in a real way. I love working with female directors.

Tell us about the process of auditioning for Bomb Girls.
A friend sent me the script and I fell in love with the show immediately.  I don’t even think I had made it to the last page before I proceeded to bug my managers to get me an audition for Betty.  It was a 5 week ordeal that included 3 auditions, lots of stress and lots of faith.  My final callback took place in Vancouver with Director/Executive Producer Adrienne Mitchell.  Adrienne was so specific and direct with her suggestions about how to make the scenes better and it was such a pleasure to explore Betty with someone who created the show. After the final callback, I did everything I could to not think about the results.  Waiting is the hardest part.  I’m actually a really obnoxious person while waiting for a part. Ask my agent, she will not disagree.

Did you do much research into the period before starting the show?
Jodi Balfour who plays Gladys let me borrow some of her historical books during Season One and we made studying together a fun activity. We are both a bit geeky and really get into learning about the period.  I find that information about the war, and the 40’s in general, has a natural way of finding itself to me.  Whether it’s a newspaper clipping or a video I need to watch, people are always suggesting research material for me to look at.

Betty is a heavily guarded character who’s revealed herself to us gradually. How much did you know about her in the beginning? Has she followed the path the writers intended in the pilot episode?
We definitely didn’t know any of the exciting story points in Season Two, back in Season One.  Just like the audience, we are constantly learning about our characters and their backstories as the series progresses.  We block shoot the show which means we shoot two episodes at once, so we get two scripts at a time and then have to wait about 3 weeks for the next two. I’m always excited to get the new scripts and discover more about Betty and the adventures she will be taking.  I’d like to acknowledge the incredible graciousness of the Bomb Girls writing team, lead fearlessly by Michael MacLennan.  I have never worked on a show where the actors are given the opportunity by the writers to address any script ideas or issues with the team before going to camera.

Have there been many twists that you didn’t see coming?
I’d say Betty’s German heritage was the most surprising twist.  I was definitely shocked by that information but thought it was so interesting that Betty had yet another deep, hidden secret.  This young woman is battling so many secrets inside of herself, I just feel so much empathy for her and her brave struggles for authenticity.

Bomb Girls initially was supposed to be just a 6-part mini-series. What was the reaction to it being picked up as a full series for a second season?
Actually, there was always the possibility of it being picked up for a second season, so when it did, I was over the moon.  All of the cast were so thrilled, and the crew was too.  The show just keeps getting stronger because we are moving together as a unit and the high level of comfort allows for less stress so you can just hit the set and make magic.

What are some of the biggest similarities and differences between you and  your character?
I’m more similar to Betty than I am different.  I am quite strong willed, brassy and blunt, but Betty has a certain tone that I do not use to address people or at least I try not to!  Sometimes Jodi (Balfour) and Mike (Seater) will bug me if I’m acting extra bossy after a day on set.  They are like ‘Whoa, easy Bets”.  I certainly smile and laugh more than Betty and am more feminine, in a traditional sense…Pink is my favorite color!

Betty’s become a breakout character, in large part because of her heartwrenching struggles as a closeted lesbian at a time when it was considered a sin to be gay. What’s the reaction been like for you?
I am so honored and excited by the recognition that Betty and the Betty/Kate storyline scenario has been receiving.  I think this character and her journey is a very important story to tell and am thrilled that it has been getting exposure internationally and gaining momentum.  Michael MacLennan called the Betty/Kate storyline “truly the great love story of the first season”, and I think the viewers were and continue to really root for these two young women.  I think what is new and captivating for audiences is that these characters are dealing with their sexuality during the 40’s and and there was really no language for identifying as gay, so Betty’s confusion and uncertainty are all the more heightened.

Is it disorienting to see your face on billboards?
Yes, totally! We actually took a whirlwind trip to New York- Jodi, Janis, Adrienne and myself- to see the billboards in Times Square.  I was giggling like a little kid and holding Jodi’s hand.  I was so embarrassed/excited, she basically dragged me over to see it. We are so happy that the Reelz channel aired Season 1 and are about to start airing Season 2 in just a few weeks! MARCH 27TH is the Premiere!

In season two, especially, you’ve had to juggle playing a romantic relationship with no chemistry (with Ivan) and a platonic relationship with chemistry (with Kate). How did you approach maneuvering through those dynamics?
As with any specific situation in a scene, I spend a lot of time reflecting on whether or not I can draw on similar experiences or relationships I’ve had in my own life.  Honestly though, the combination of the excellent writing and the incredible actors,  (Michael Seater & Charlotte Hegele) I just try to stay present in the moment and remember Betty’s overall goals.

In the mid-season finale, Betty finally has a true moment of connection with someone else of her orientation. What did that moment mean to the character and will it set her on a new trajectory heading into the back half of the season?
Weren’t you happy for Betty?! Me too. I was so happy she had a little reprieve to her struggle. Everybody needs to be touched and have requited love in their life.  Love can sometimes be so disappointing and when you can’t draw blood from a stone, it’s best to move on.  I will say though, getting over your first love is an extremely difficult task.

Do you have a favourite episode so far?
I’d have to say although [Season Two] Episode 4 was incredibly exhausting, both physically and emotionally,  the German episode was my favorite.  The tomboy in me likes to do as many of my own stunts as possible.   What can I say? I’m a scrappy lil gal.  The actor who played the German, Kjartan Hewitt, was really fun to work with.  It’s a shame he can’t come back for more episodes!

What can we expect from the rest of season two?
There are so many twists, I can’t wait for you to see it, Kelly! This is why it’s been so fantastic having double the amount of time and episodes to expand the stories of all the characters.  Betty’s relationship with Kate goes to some very unexpected places, but I don’t want to give any of the mystery and suspense away!  All the women are constantly growing and challenging themselves in ways that are ultimately heroic.  They also make mistakes but keep getting up and trying again, just like the soldiers overseas were doing.  The world just kept fighting.

Is there anything you’d like to add?
Now living in Los Angeles, I have personally donated and have been learning about an excellent organization, Equality California that needs your help. LGBT Californians are still denied full equality just because of who they are. But we can help change that.