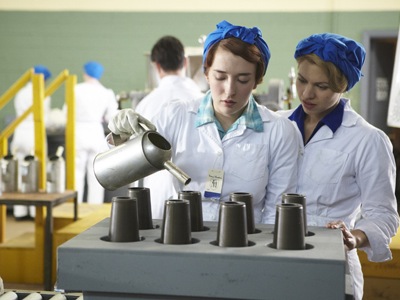 A new 6-part miniseries premiered on Global last week tracing the lives of women in World War II who worked in the factories making bombs and bullets for the Canadian troupes.

The series sports some of the best production values ever to come out of Canada’s sadly minuscule industry and the cast is filled with great parts for some excellent actors, notably the women at the heart of the story. Meg Tilly shines as the factory floor supervisor Lorna Corbett- principled and strong-willed yet prejudiced and subordinate, it’s a fascinatingly complex mixture navigated wonderfully by the soft-spoken Tilly. Her well-intentioned paranoia about the factory’s so-far completely innocent Italian worker (Antonio Cupo- fantastically defensive/macho) is beyond compelling. Jodi Balfour is great as the privileged but crusading Gladys, trapped in a confusing engagement to the always-welcome Sebastian Pigott and desperate to do her part, whatever that may mean. Charlotte Hegele’s Kate is a wounded but brave creature full of as-yet-untapped potential and Ali Liebert became a favourite of mine within minutes of the show’s beginning as the cagey/tough/vulnerable Betty. The relationship developing between her and Kate already has me on the edge of my seat.

Bomb Girls is not only a great premise but a solidly well-executed production, making me wish it would last well beyond its measly scheduled 6 week run.