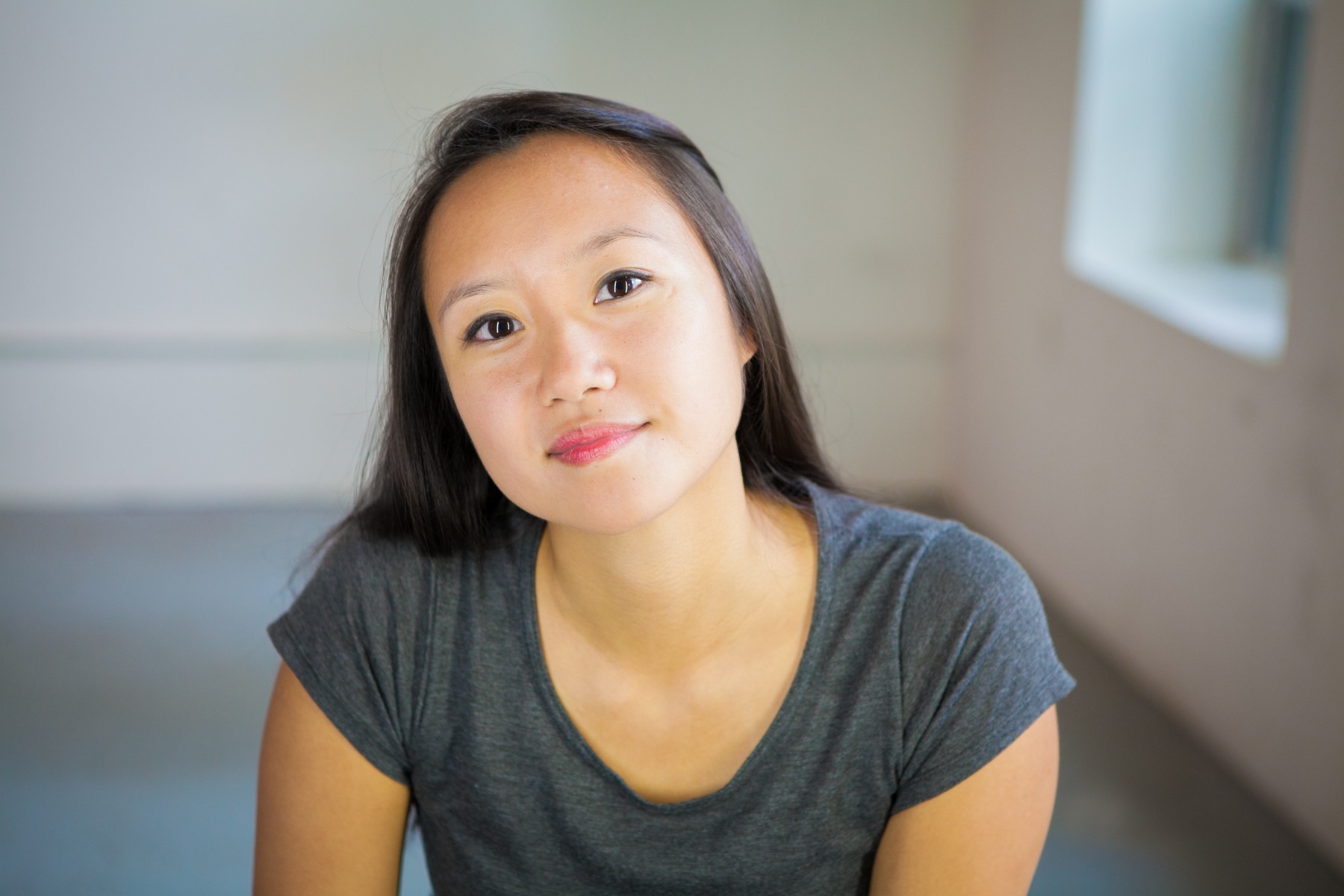 Our first interview of the year is just in time for the Next Stage Theatre Festival where writer/director Chloé Hung’s play All Our Yesterdays is making its highly anticipated return after a successful run at the 2015 Toronto Fringe Festival.

Nominated for Outstanding New Work (the production also scored an Outstanding Actress nod for Chiamaka Umeh), Chloé’s thoughtful and uncompromising play based on real events in Nigeria opens at NSTF on January 7th at 6:30. Read our interview with the playwright then book your tickets HERE.

Can you remember your first experience with theatre?
My parents took me to see a production of Beauty and the Beast in the mid-1990s. I was very little and it was probably the first show I had seen.

I remember the moment when the Beast turns into the Prince I was so swept up in the technical theatre magic, I kept asking my mom after how the Beast could possibly turn into a human Prince. Now I know that it was a costume that the actor took off in a quick change but I was maybe 5 or 6 years old and I was the perfect age to appreciate the magic of theatre.

What was the first thing you ever wrote?
I’ve been writing stories since I was a little kid, most I don’t remember. The one that comes to mind as the earliest instance of me being serious about writing was a short story I wrote for a grade 7 English class. My teacher Mrs. Cathie Pfaff encouraged me to submit it to our school’s writing competition. I hadn’t thought about writing in a real way so I was very surprised when I won. The story was about the granddaughter of Confucius who wants to go to the Confucian Academy but she can’t because she’s a girl. So she pretends to be her brother and applies to the school. When she’s accepted to the school she receives a letter from her brother saying her father is very ill. So she decides to not go to school, go home and take care of her father, and then she starts her own school.

So apparently, girls getting education has been a theme I’ve been playing with for years. I didn’t realize that until I answered this question.

Tell us about your nominated play All Our Yesterdays. How did the idea develop?
I had been following the Chibok girls’ story since they were kidnapped but like most of the world I soon forgot about them. In October, 2014 I read an article that marked the six month anniversary of their kidnapping, I realized how horrible I had been for forgetting about the girls and it got me thinking about how we are able to forget about people who are far away because they don’t even seem like real people anymore. They’re so far away, they’re from a country I’ve never been to, and there are many more tragedies that have occurred around the world since then. It’s a sad fact of the world we live in. I wrote “two sisters kidnapped by Boko Haram” on a post-it, put it on my wall. I stared at it for too long. Then I had an assignment for school (I’m doing my MFA in dramatic writing at NYU) to write a non-linear sequence in three pages. I ended up writing the last moments of what would become All Our Yesterdays. The scenes were well received and I had just made the lottery for the Toronto Fringe, so I decided to write a play about the Chibok girls. I used the play to express my frustrations with how we can forget about these girls, and how most of the planet devalues girls and girls’ education.

Did you go through a lot of drafts? How did the play change through the development process?
There were A LOT of drafts. The play’s story and structure did not change dramatically. There were some scenes that didn’t make the cut (“In writing, you must kill all your darlings” – harsh truths from William Faulkner). It was changing things here and there to make sure that the themes and characters were clear.

Your play is based on true events and deals with heavy subject matter. What sort of research went into capturing the harsh realities of your story?
There was a lot of research, some online and print articles, some interviews in person and via skype. I interviewed Hadiza Aminu from #BringBackOurGirls campaign in Nigeria, we spoke via skype and she gave me great insight into the community and what the parents of the missing girls are currently going through. I interviewed Pablo Idahosa in person. He is a York University professor of African Studies, born in Nigeria. His perspective was very interesting, as a Nigerian expat he has a unique perspective as an outsider looking in on the place he is from.

All Our Yesterdays was a little different as I had essentially written the ending already (from my class assignment) so I knew where the play was going, I just needed to make sure I could keep the audience engaged to get to that end.

How do you approach casting your work? Are you ever able to find actors who fit perfectly with what you had in your head while writing? Do you write characters for a specific actor?
I had worked with Chiamaka Umeh before as I was an assistant stage manager on the Randolph Academy’s production of Into the Woods where she played the Narrator. I asked her to audition and she blew me away. I met Amanda Weise in the audition room and she had such an interesting way of playing with Ladi’s anger and hurt.

I’ve never written specifically for an actor, along the way I may have actors in mind who could play that character. I’ve also never been asked to write for someone, I’d love to try.

You also directed the production. Did you have a strong idea of what you wanted going in or was the play re-imagined a bit in the rehearsal process?
Even if you have it all planned out in your mind, things always change.

As I was writing, I had a clear idea of what I wanted the play to look like, that’s partially why I took on the role of director. For the most part, the production ended up being what I had in mind going into it.

Chiamaka Umeh is also nominated this year, for Outstanding Actress for her performance in All Our Yesterdays. Tell us about working with her on the role of Hasana.
What made Amaka stand out for me while we were doing Into the Woods was her maturity and ability to convey gravitas. This was helpful while she played the Narrator. With Hasana, she was able to bring that maturity and gravitas and apply it a little differently to a character on the autism spectrum. She took great care to do her research in Asperger’s and autism, and we worked intensely on getting the pitch of her voice right. She was able to give Hasana all the intelligence and wisdom the character has with the childlike impulses of a teenager.

That’s a nice way of saying: Living room dramas about middle class white families with a history of alcoholism are fine and all but I’m not going to write that. I’m not going to create a play about that subject matter better than Eugene O’Neill and there are already plenty of people who try. Besides, that’s not the reality I know.

All Our Yesterdays is about to open for a second run as part of the Next Stage Theatre Festival. Has much changed in revisiting the text?
This has been a great opportunity to incorporate some of the feedback I received on the Toronto Fringe production. The overall structure and the story are the same, but I was able to go in and make a few additions and sharpen the dialogue.

What are you doing now/ what’s your next project?
My next project is graduating from grad school. So currently, I’m finishing up my screenplays, my plays, and my TV pilots in time for graduation.

After that we’ll have to see. I have plans to stay in the US for a while but I want to keep doing theatre in Toronto. It is such an interesting time for theatre in Canada. I have a play about a Chinese immigrant family moving to Scarborough in the late 1960s that I would love to put up in Toronto.

Do you have anything you’d like to add?
Profits from our production will go to Save the Children Canada. It was important to me that this play always has an affiliation with and will raise money for a charity that creates opportunities for children’s education. For the Toronto Fringe festival production, we partnered with Plan Canada’s Because I Am A Girl campaign and raised funds for their initiative.

For me it’s not enough that to just write this play. I did this from the comfort of my own home, just me and my computer. It’s not enough to put up the play and raise awareness. As I don’t have the resources or the know-how to go to Nigeria and help out on the ground, I want this show to do something to help. In this case, all we can do right now is raise money to help girls get access to education.