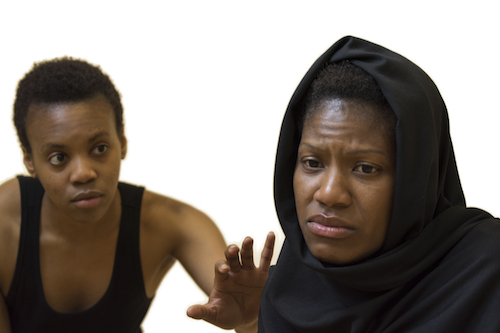 All Our Yesterdays (A)
Based on the true events of the kidnapping of 276 girls by Boko Haram in Nigeria, Chloé Hung’s new play All Our Yesterdays is a standout. Chiamaka Umeh and Amanda Weise play Hasana and Ladi, two sisters who have only each other during their six months in captivity. Umeh and Weise are remarkable; they effortlessly shift between their lives before the kidnapping and the mounting pressure of their current imprisonment, building a complex, and loving relationship. Hung’s play fearlessly confronts and provokes questions about race and gender, about who we value and why, through Hasana and Ladi’s heated debates and heartbreaking reality. It’s worth pulling yourself away from the generally jubilant atmosphere of the Fringe for this topical and timely play. I only wish that the scene transitions could have been tightened to keep the energy moving forward relentlessly to the production’s haunting final moment.

N.B. AnOther Theatre Company also used their first two performances as a fundraising initiative for Plan Canada’s Because I Am A Girl Campaign and have included information on worthy charitable organizations in their program, such as The Malala Fund. Thank you.

How Often Do I Dream… (A)
Katie Doran’s How Often Do I Dream… is, in my opinion, performance art rather than theatre. The producing company is called Transitus and its mandate is to seek new forms of theatre and to investigate how we communicate. This beautiful piece certainly does that. I say that it is performance art because it neither adheres to nor subverts traditional theatrical conventions; it avoids them entirely. Dorian never presents herself to the audience as anyone other than herself (she tells a story, I think as her grandmother, but we are always aware that it is Dorian telling us a story and that she has not become another person). Indeed, she introduces herself to you as you enter the room and invites you to experience her “memory museum” and to contribute to it. How Often Do I Dream… is beyond simple audience participation, this piece is a true dialogue between artist and audience. Dorian is an unspeakably generous performer who shares her experience with memory, aging, and the loss of beloved family members with such grace and dignity, it will take your breath away. Be prepared for an intense and emotional experience, but one that I am very grateful to have had. You’ll be safe in Dorian’s capable hands.

The Merry Wives of Windsor (A-)
Looks like Shakespeare Bash’d has another hit at the Victory Cafe! Full disclosure: I am friends with and have worked with several members of this company. However, I am nevertheless impressed by directors James Wallis and Catherine Rainville’s skill at guiding their company to a remarkably clear staging of a complicated play full of deceptions, disguises, and quite frankly, some less-than-wonderful text. My highest compliments go to Andrew Joseph Richardson and Lynne Griffin who handle incredibly complex monologues explaining their mind-boggling schemes with patience, commitment, and care, a blessing because most of the jokes depend on the audience keeping up with their zany antics. With a strong ensemble across the board, Jeff Dingle is a perfect romantic fool and Sean Sullivan’s Falstaff is equal parts charming and repugnant. I do wish Bash’d had faced the problems of this play head-on: namely, the blatant misogyny. As it stands, it’s a fun comedic romp that you can enjoy with a beer in your hand, but it could be more than that.

Waiting in Line (B+)
Honest Arts has brought Waiting in Line all the way from Limerick and it was absolutely worth the trip. This physical theatre piece unapologetically reveals the effects of the social welfare culture created in Ireland over the last 25 years and offers snapshots of what life is now like for the younger generations. Performers Pius McGrath, Eva O’Connor, and Johanna O’Brien throw themselves into the piece and absolutely win the hearts of the audience. Particularly moving scenes include a husband trying to hide his unemployment from his wife and a young couple who is forced to break up because one can’t afford to stay in the country. However, the piece never falls into sentimentality; this company knows how to find counterpoint and comedic relief, particularly McGrath, who is just phenomenal at creating beautifully nuanced and distinct characters. The set is cleverly projected onto large white flats, allowing great flexibility with minimal fuss. Unfortunately, the performers sometimes spoke a little too fast with strong accents and the audience I experienced the show with definitely lost some of the dialogue as a result.

Headless/The Play (F)
I do not wish to be unkind, but I must be honest. Tommy Jeff McAteer’s first play, Headless/The Play, is just a mess. According to the program, this piece began as a ten minute naturalist writing assignment in a playwriting class at George Brown College, which is just plain confusing because the show is billed as an “existentialist comedy”. How can a piece begin in naturalism and become an existentialist comedy? With such a strange and flawed foundation, it’s no wonder that this production utterly falls apart (literally – a prop was dropped and broken at the performance I saw, which all of the actors unwisely chose to ignore). Unless you find your blood sugar levels dangerously low and are hoping to collect on the branded chocolate bars distributed to the audience as you depart, I suggest avoiding this production at all costs.