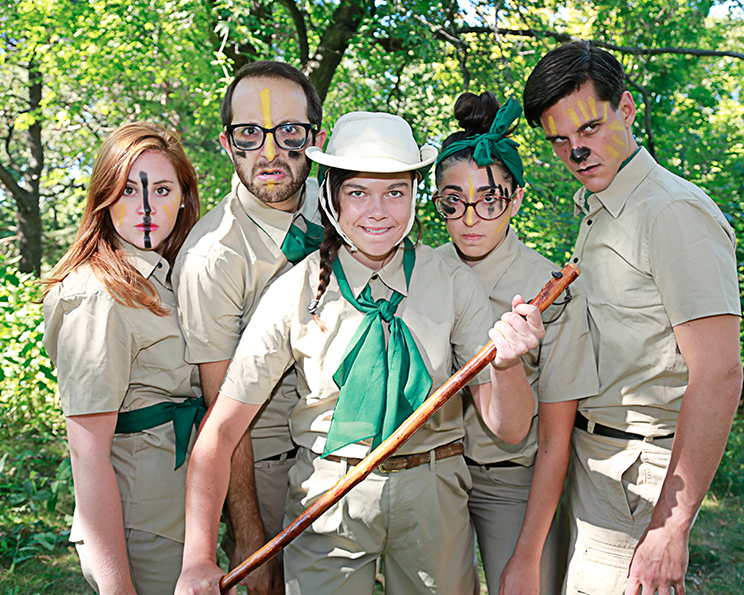 On Stage in TO: Fall Comedy

Team Kat Goes on Retreat
Playwright/director Kat Sandler’s latest one-act at the Storefront Theatre is a wackier and more wildly comedic entry into her ever-expanding canon of thoughtful, witty work. The story of four interns sent on a camping retreat to compete for a single job at a vague but powerful company, Retreat is a deconstruction of corporate culture and relentless ambition that ups the absurdist ante with every scene until the audience is crying with laughter. Save a few key humanizing monologues and the beautiful vulnerability the great Kat Letwin layers into her outlandish performance as ranger Candace, Retreat is a little less emotionally impactful than many of Sandler’s other pieces, but it’s at least twice as funny. Led by Letwin (in the Kat team-up with writer/director Sandler that is as satisfying as it was overdue), Theatre Brouhaha has again assembled an unerring ensemble. Most effective are the two type-A retreaters Nicole and Jordan, played with war-like intensity and perfect irony by Nicole Buscema and Justin Goodhand. Zigzagging across the line between his cut-throat instincts and desperation to be loved, Goodhand makes Jordan more than just the comedic highlight of a play that pushes the boundaries further than I thought even Kat Sandler could go.

Rob Ford, the Musical: Ubu Mayor
One Little Goat Theatre Company premiered Ubu Mayor just days before Rob Ford was diagnosed with cancer. A week earlier, while perhaps not still at the absolute height of his absurdity, he was the perfect satirical bullseye with the threat of possible re-election looming terrifyingly closer. Then everything got a lot less funny. Adam Seelig’s new contemporary musical adaptation of Alfred Jarry’s controversial farce Ubu Roi absolutely depends on the audience’s willingness to laugh at the mayor. Not any old corruptible doofus of an authority figure, specifically our mayor, and his terrifying brother. Lucky for writer/director/composer Seelig, Ford’s greatest hits of offensive idiocy are still worth at least a vengeful chuckle or two, despite their rather grim epilogue. The fictional story of Ubu, his brother Dudu and wife Huhu is unfathomably silly (despite the valiant efforts of Richard Harte, Michael Dufays and Astrid Van Wieren, respectively) and the dialogue-to-music balance is off kilter but, in the moments when he wholeheartedly skewers Ford (the clever song “plenty to eat at home” comes most readily to mind), Seelig is on point with his somewhat cruel but wholly deserved comedic condemnation.

Hart House in Earnest
Director Cory Doran’s approach to Oscar Wilde’s masterpiece The Importance of Being Earnest is to examine the idea that these are slightly mad characters in a slightly askew world (the set is literally a picture frame that is slightly askew). It’s an interesting concept, but it doesn’t particularly add to the text without making the characters harder to relate to. Some acknowledgement of the craziness of Wilde’s plot is necessary to carry off any Earnest but there are moments in this production when the characters lose their humanity altogether in pursuit of further zaniness. The main offender is Victor Pokinko’s Algernon, a character whose flamboyance and vanity are pushed entirely too far here until Wilde’s most popular character becomes merely unlikeable. The bright spot is undoubtedly Michael Adam Hogan’s delightful Jack who manages to banter and bumble his way charmingly through Wilde’s absurd world while being so bold as to occasionally underplay a beat or two (a refreshing reprieve). Andrei Preda is a winningly sweet Dr. Chasuble and Eliza Martin a bright Cecily though a witchy Lady Bracknell and intolerably scene-chewing Lane grate on the nerves. One of those unfortunate great works that doesn’t make much sense re-interpreted (beyond “everybody act crazier!”) or modernized (the social positioning is too specific), Earnest can be a bit repetitive unless you manage to find the sort of perfect cast who can make things fresh again. Hogan aside, this was not that cast.