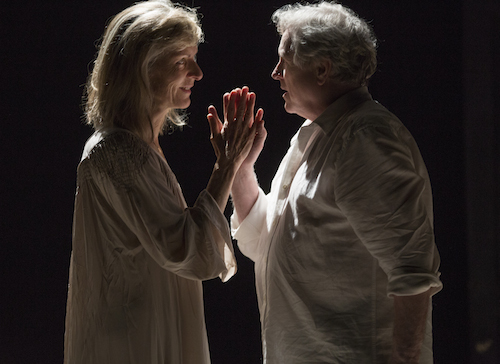 I Ne’er Saw True Beauty Till This Night: A Tender Thing

Resident Artist Paula Wing writes program notes for almost all Soulpepper productions. I always read them but I usually forget them the moment I finish. Her notes on A Tender Thing, however, are not quickly forgettable but rather remarkably personal and lovely. She talks about the power of hearing familiar words in a new context (“like an old familiar melody”), about the poignancy of a teenaged relationship redefined by “adult disappointments, long familiarity and the implacability of old age”, and about why the casting of this particular production (the casting of “two greatly loved long time lovers”) takes Ben Power’s gorgeous reworking of Romeo & Juliet to a completely different level. She brings the audience into it, pointing out that we “in our turn have had a long and intimate theatrical relationship with them”. And it’s true. Soulpepper actually does more plays every year than Stratford and Shaw but, because they’re spread out over the course of the full year instead of playing in rep for a few months, most of the productions feature the same players (often in five or six different roles each season). The company is therefore relatively small, or at least the core of it is. At the very centre of that core is married couple Nancy Palk and Joe Ziegler, founding members of the company who, between the two of them, continue to anchor almost every production the company does. In recent years we’ve seen them play the Tyrones of Long Day’s Journey Into Night and the Lomans of Death of a Salesman; we’ve seen Nancy accused of witchcraft and Joe visited by the ghost of Christmas past; we’ve seen their son Tim join his parents onstage and Joe take a detour over to the Shaw Festival to direct a play about being married for a good long time (the delightful When We Are Married, a highlights of the season). Whether you’ve actually met them or not, Canadian theatre goers (and Soulpepper audiences in particular) feel like they know Nancy and Joe (whom, in this context, must be called Nancy and Joe rather than Palk and Ziegler; I trust they’ll forgive the informality).

In her even more lovely Artist’s Note, Nancy provides a backstory more perfect than a writer could have invented: they met at theatre school and fell in love while rehearsing Romeo & Juliet’s balcony scene. It’s hard to imagine Power’s play in the hands of anyone else. The intimacy and comfort of Nancy and Joe together on stage perfectly encapsulates the indispensable intimacy and comfort in the play’s central relationship. They are Romeo and Juliet, with a love as intense as the 13 and 16 year olds they’ve always been but with a longevity heretofore un-enjoyed. The casting of Nancy and Joe and all the beautiful baggage that brings (in their private dynamic and the audience’s public relationship to them) allows director Michael Shamata to skip the hard part of establishing the complex relationship and delve deeper with his actors into the beauty of Power’s rearranged text.

In constructing his portrait of aged lovers approaching their final separation, Power makes beautiful use of lines from the expected scenes- the iconic balcony poetry, the bittersweet nightingale/lark exchange, the final goodbyes in the Capulet monument- but his most powerful accomplishments come with the use of unexpected text. A sonnet is borrowed from the larger canon and dialogue stolen from Mercutio and the Friar but my favourite moment was Nancy’s devastating delivery of one of my least favourite parts of the original script- the Nurse’s longwinded speech in act one, scene three. Power takes what’s meant to be a comical memory of young Juliet and repurposes it as older Juliet’s memory of her late daughter Susan, shaping something completely new using only the materials Shakespeare gave him. It’s that remarkable vision- seeing new potential in the overly familiar- that makes Power’s script so moving.

The body of A Tender Thing doesn’t make use of one of Romeo & Juliet‘s (and the English speaking world’s) most famous scenes. As Nancy and Joe weave their way delightfully and heartbreakingly and with beautiful simplicity through this Romeo and Juliet’s finals days, they never speak the words that first bring the teenaged lovers together. It’s only after Juliet’s passing, when this version of their story comes to a close, that Michael Shamata presses the palms of Canadian theatre’s great lovers together, Michael Walton surrounds them in a perfect ethereal spotlight, Mike Ross fills the room with music, and Ben Power brings them back together with the words that have always and will always begin everything again: “If I profane with my unworthiest hand…”