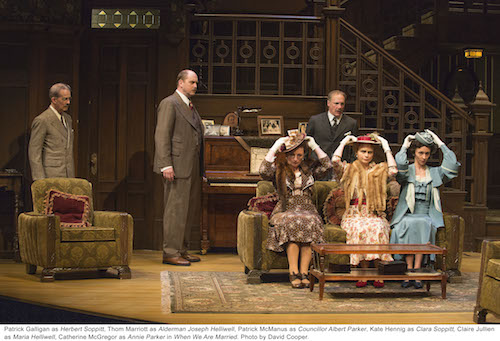 At the Shaw: When Shaw Vets Are Married

The strongest all-round cast of the Shaw season so far is about 70% of the reason that When We Are Married really works. Then there’s the 20% that comes down to the charming and insightful material itself (JB Priestley’s text is not groundbreaking but it is intimate, funny and sweet without being silly, which is no short order). The final 10% may be small but it is also the key to the whole thing: director Joseph Ziegler’s choice to take When We Are Married seriously. He doesn’t make many big choices- the set and costumes are period, the accents stay strictly Yorkshire, nothing is particularly extrapolated or interpreted- but he, on the most wonderfully basic level, sees human beings where many directors would have seen archetypes and that makes all the difference to the production having a heart and a head. Moments like the quiet one wherein the forceful Kate Hennig looks at an old photo and tears up ever so briefly before being interrupted again- that’s what makes When We Are Married special, both because Ziegler saw the need for that moment and because Hennig is so damn great in it.

The six actors who make up the core of the story are all seasoned pros with almost 50 years at the Shaw between them. As such, you can trust them not to stumble over tricky regionalism the way many actors seem to be doing this season (the only person who struggles here is Kate Besworth whose character barely resonates anyway). Hennig is always a favourite for her natural comic timing and emotional nuance but I was also particularly taken with Thom Marriott as the great Claire Jullien’s bumbling other half (he’s fantastically funny without ever needing to play it up). Catherine McGregor delivers a vulnerable and sweet performance as the one woman of the three whose husband is particularly oppressive while Patrick Galligan is charmingly soft-edged in a similar role on the male side of things. The final piece of the puzzle and perhaps the largest “character” of the group, Patrick McManus is wonderfully self-congratulatory as Councillor Albert Parker though he also manages to find the humanity wherever he can. All three pairs do a good job of establishing the tricky chemistry of a long-married couple- that sense of being deeply linked without the necessity of or even ability to play physical affection- and the production rests sturdily on their utterly capable shoulders.

It’s interesting, then, that my favourite performance actually came from the least experienced cast member- relative festival newcomer Jennifer Dzialoszynski (in her 2nd season) as big-mouthed servant Ruby Birtle. She’d only uttered about two lines of dialogue while chatting up an excellent Charlie Gallant in the first scene when I decided that I completely loved her. She’s the first onstage, she thrills and charms throughout, and she literally gets the last laugh- just you wait, Dzialoszynski is what’s next and you can tell that even in a cast full of the people who are the best of what’s now.