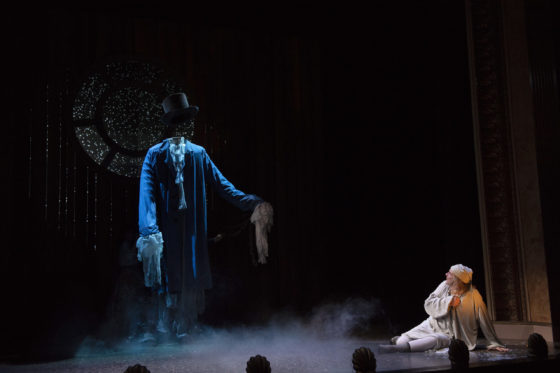 Christmas at the Shaw

For all its traumas and sadnesses, the pandemic was, at the very least, an immensely clarifying experience. With our lives irreparably disrupted and access to so many things denied, it very quickly became obvious how I truly felt about the things in my life that had become routine. My character-defining love of television stood firm and pulled me through 2020 with far more joy and comfort than I had any right to expect. My love of Shakespeare held steady as well, my interest in baseball did not. I missed the movie theatre like crazy but had little interest in watching actual movies if the option of being in the theatre wasn’t there. I missed indoor dining but finally came to terms with the fact that I never really liked concerts. There were people into whose arms I was desperate to leap but more than a few who’d fallen out of sight and then surprisingly easily out of mind. I missed the ballet less than I thought I would and worry that with the changing guard over there that the era I loved so dearly has ended without my seeing it. It was a relief to go back to the Stratford Festival this past summer but I hadn’t felt a pang in my heart in its absence the year before. Perhaps to my surprise, but if we’re really paying attention perhaps not so much a surprise, it was Shaw I missed the most.

I refreshed my email an embarrassing number of times between April and October hoping to see that The Shaw Festival was finally reaching out to critics beyond the big print guys but the email never came. Vague provincial guidelines and strong sales meant that press tickets were scarce and the closer I came to missing my first Shaw season in a decade, the more I realized that they were the company I most wanted to return to. I love their Niagara-on-the-Lake home with its quiet side streets and tourists who walk so slowly it makes you reconsider why you’re walking so fast. I love every person I’ve ever met who works at the Shaw, their no-assholes policy pairing with a mandate that necessitates nerdy keenness and intellectual curiosity. But mostly I love their work, its impossibly consistent expert execution and the mischievous push of ambitious modern artistry against the constraints of a very traditional mandate. I’ve long loved the Shaw Festival and have often lamented the also-run status given to them by people who don’t bother to make the trip out to NOTL with the same consistency with which they visit the Shaw’s bigger competitor. But I learned during the pandemic that even I had been taking them for granted.

As of last week, press tickets are a thing again at the Shaw as they embark on their holiday programming, a seasonal expansion that began a few years ago but I’d somehow missed until now. Stepping back into the beautifully historic Royal George and comforting Festival Theatre for the first time in two years, the magic of the Shaw was palpable. I’m going to try to remember that even when the company returns, hopefully, to its familiar place as a mainstay of my summer schedule.

The must-see of Shaw’s very welcome holiday mini-season is artistic director Tim Carroll’s adaptation of A Christmas Carol, directed this season by Molly Atkinson. I know, I know- you’ve seen So Many Christmas Carols! See this one anyway. Staged on the Royal George’s classic proscenium arch with lush Dickensian style (courtesy of designer Christine Lohre), this Christmas Carol harnesses the power of practical stagecraft to create unforgettable theatrical moments without leaning on projection or trickery beyond Kevin Lamotte’s smart but ultimately restrained lighting design. With a cast of actor-singers that includes Shaw favourites like Kelly Wong and Patty Jamieson, music in the form of classic carols and one slightly disorienting anachronistic pop song forms the tonal backbone of this feel-good piece while beautifully executed puppetry, creative visual touches, and expertly timed blocking gives it its wings. Which is to say nothing of the heart provided by the ever-wonderful Graeme Somerville as a very funny but insightfully sad Scrooge. Carroll’s biggest flaw as an artistic director is his proclivity for guest stars, often leaving me with the response of “Graeme Somerville could easily have done that” even when the guest star in question is one of my favourites. It’s lovely to see company man Somerville ascend to this star role because he’s quietly Shaw’s great powerhouse. An excellent ensemble fills out the vibrant world around Scrooge with full, layered characterizations even for the easily overlooked (Marla McLean‘s anti-Scrooge anger is resonant as Mrs. Cratchit, Jason Cadieux’s Mr. Hubble is a jolly delight). The audience wears masks, as do any performers who step across the fourth wall throughout the play, but the pandemic is otherwise wholly absent from this production, something that’s not true at most reopening theatre. Full of mystery, magic, and heart, Shaw’s Christmas Carol is a step out of our hard time and a heartrending reminder of what’s possible in a theatre.

Shaw’s other holiday production is the raucous musical Holiday Inn, adapted from the film of the same name and featuring the greatest hits of Irving Berlin’s songbook. While A Christmas Carol‘s magic is all careful craft and important themes, Holiday Inn‘s appeal is all about simple joys- a sweet love story, a peaceful setting, a hummable tune, Kyle Golemba tap dancing. Led by offstage married couple Kyles Golemba & Blair (a dynamic that adds very fun subtext if that’s your kind of thing), the cast of Holiday Inn is all charm and triple threat goodness. Judith Bowden’s beautiful costumes and Allison Plamondon’s vibrant choreography make this simple show a visual feast full of pastel niceties. The ultra-dynamic Vanessa Sears is a perfect addition to the cast as the potentially irritating Lila, her bright light lending credence to the character’s claim that her name belongs in lights (she’s Vanessa Sears, holding that lady back should be punishable by law) and she’s balanced well by ultra-likeable girl next door Kristi Frank whose soprano isn’t as on-point as it usually is but she’s as delightful as ever nevertheless. Drew Plummer stands out in the excellent ensemble with total commitment to his character’s inner life even when just standing in the background and the platooned role of Charlie/Charley Winslow is an excellent update as young actors get a shot at the scene stealer regardless of gender (opening night featured a very fun turn by Julia Thompson). Holiday Inn is the much more commonplace offering of Shaw’s two holiday shows but there’s no such thing as commonplace anymore. It’s been a hard two years so maybe now isn’t the time to worry about whether there’s a more challenging musical out there the Shaw could be doing instead. At least for now, I’d rather just be let myself be happy as Kyle Golemba goes into his dance.