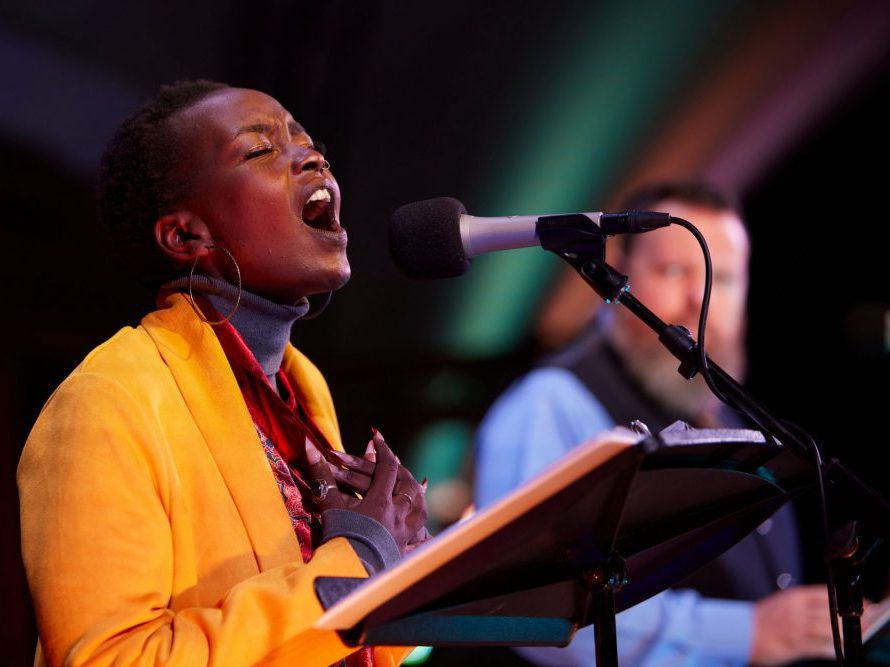 Finally There’s Sun
My very favourite thing at the Stratford Festival this year, Finally There’s Sun is the concert production that puts into words the subtext of every other show- after more than a year of darkness this, right here, this sitting together in a theatre, it’s the light at the end of the tunnel. I cried every single moment of this show, ironically thankful for the mandatory mask hiding my theatrics as tears of mostly gratitude but also trauma, exhaustion, and wonder poured down my cheeks. The cabaret programming has been Stratford’s great triumph this season and all the best ones share three things: excellent casting, insightful song curation, and thoughtful selections of spoken word to help shape a story without forced banter or awkward scripting. Curated by Sara Farb and Steve Ross, Finally There’s Sun uses simply stated facts and quotes to guide the audience through a linear lookback at the Covid-19 pandemic. With a songbook leaning on verbose off-broadway gems and melodic contemporary ballads, the music of Finally There’s Sun has such apt narrative impact that you’d think it was a wholly original musical if you didn’t recognize the specific songs chosen. The curators brilliantly harness the tonal diversity of their chosen pieces to bring the audience back not only to the vast range of emotions we’ve experienced the past two years but to the jarring reality of those emotions crashing into one another. The production’s most fun number (delivered wonderfully in the bright, characterful tenor of Noah Beemer) abruptly runs into the killing of George Floyd and “The Smearing of Silent Blood”, a song/spoken word piece delivered by its writer Germaine Konji in the most sublime moment of artistry in the whole festival this season. That lack of run-up, the suddenness with which the production steps into the darkest time of a dark time, it’s an admirably bold dramaturgical choice that I can imagine very few artists making but for me it was the most insightful, honestly commemorative choice in a show full of such choices. Real life doesn’t have a minor key change to signal that the sadness is coming; in real life, a lot of us were watching ABC’s Disney sing-a-long special when the protests hit our newsfeeds. The past two years have been hard on everyone but some of us had the privilege of happy song reprieves and, in highlighting the harsh contrast of that moment, Farb and Ross subtly but vividly capture the complexity of 2020’s emotion and how differently we all experienced it. All the cabaret productions are severely limited by song copyrights in the move from stage to screen but, even in truncated form, Finally There’s Sun is my one true can’t-miss recommendation for Stratford’s post-live streaming content.

Freedom Cabaret
My other favourite cabaret of the season was this beautiful collection of Black music thoughtfully assembled by the ever-engaging Beau Dixon. Joined by fellow singers Robert Ball, Alana Bridgewater, and Camille Eanga-Selenge, Dixon takes the audience through a history of extraordinary artistry from the traditional “Hold On” through to Beyoncé & Kendrick Lamar’s “Freedom”. Breaking the work into four acts- “Negro Spirituals”, “Silent Voices”, “Message Lost in the Voices”, and an Encore section highlighted by “Change is Gonna Come”- with a combination of stirring quotations and casual banter forming the links between songs, Dixon refrains from bells and narrative whistles in order to keep the spotlight where it belongs on the songs both iconic and overlooked and the songwriters who so rarely received the culture-shaping credit they deserved.

Serving Elizabeth
The one play on my must-see list, this excellent new work by Marcia Johnson features a standout cast each in multiple roles spanning two time periods full of both levity and narrative ambition staged with the only fully successful direction + design execution in Stratford’s tent-bound season. Anchored by mother/daughter performances from the ever-reliable Arlene Duncan and Virgilia Griffith, this cast is an energetic joy. Griffith is one of the best young actors in Canada right now so it’s a thrill to see her get to show off her range as two generations of ambitious young women grappling with her relationship to the British royal family in the context of her African heritage. Inspired by The Crown and its often irresponsible handling of colonial history, Serving Elizabeth splits its time between contemporary television studios and 1952 Kenya, playing beautifully with our perception of truth and what’s truly important. Joining Griffith and Duncan, who with every line reminds the audience that there are few actors of her comedic calibre anywhere, are my perennial favourite Sean Arbuckle (good in absolutely everything) and the more polarizing Sara Topham whose practiced poise is so perfectly deployed here as the young Elizabeth II that I almost want to write to the producers of The Crown on her behalf. Kimberley Rampersad’s clean direction aptly handles the challenges of tent life with just a hint of Brechtian flair and A.W. Nadine Grant’s costumes are a feast. With its small, diverse cast and lack of donor-friendly name recognition or Shakespeare tie-in, Serving Elizabeth is atypical programming for the festival but hopefully the company has learned some important lessons from this atypical season: More of This Please, Stratford!