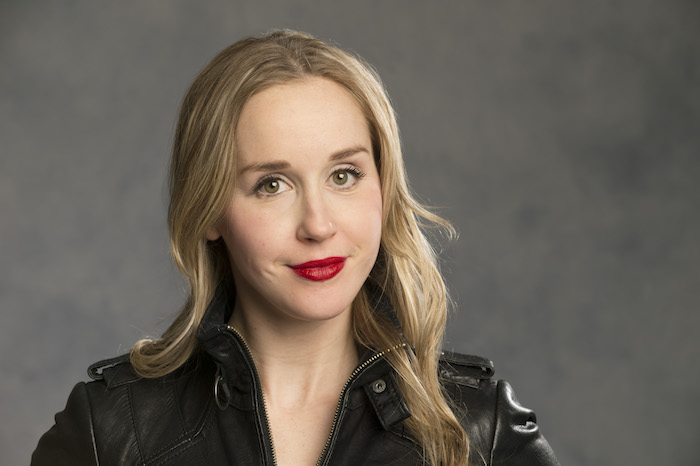 Me and My Girl was the big hit of the Shaw Festival last season. A silly fish-out-of-water romp about a happy working class couple tossed into judgemental high society, Ashlie Corcoran’s production was fun, frothy and the perfect showpiece for the adorable Kristi Frank who earned an Outstanding Performance in a Musical nomination for her feisty performance as Sally, the titular “My Girl” (the legendary Michael Therriault played her “Me” counterpart). Decked in a quirky getup and armed with a perfect cockney accent, Kristi bantered and belted and tapped and twirled and generally made it impossible for even the grumpiest audience member to keep from smiling.

Do you remember your first experience with theatre?
My timeline is a bit blurred, but it was either a show at the Saskatoon Fringe Festival with my mom and sister or when the wonderful Ernie Coombs came through Saskatchewan with his Mr. Dressup tour. I am very fortunate to have a family that was able to make the arts a large part of my upbringing.

When did you start singing?
One of my first memories of singing was at our cabin up north in Saskatchewan. We went fishing quite a bit and whenever my dad would rip back into shore, I would belt out my favourite tunes. We were going so quickly that it felt like no one could hear me and it had the added bonus of feeling like I had a private wind machine.

What are some of your all-time favourite musicals?
I’m going to exclude the musicals I have been in since they tend to become something quite special after having worked on them, so I would say The Light in the Piazza, Hamilton (it’s my favourite work out jam), Once, Chicago and The Last Five Years.

Do you have any dream roles?
Any of the sisters in Women, Viola in Twelfth Night, and if someone wants to present Light in the Piazza and cast me as Clara that would be pretty darn dreamy.

What attracted you to the role of Sally?
From my first reading of the script, I could see that Sally was bold, loving and had a great sense of humour. Those characteristics alone would have been enough to draw me in, but I really did end up falling more and more in love with Sally and the musical itself during the process.

Tell us about working with director Ashlie Corcoran and Michael Therriault.
I wish I could have bottled up our director Ashlie’s enthusiasm for this piece. She approached it with such joy and greatly regarded the input she received from the whole company, which enabled us to feel like our contributions were valued. I also have to say our whole creative team was just incredible. And Michael Therriault is simply marvelous – there aren’t enough adjectives to describe what a great human and actor he is.

The production had a lot of physical comedy. Is that something that comes naturally to you?
Is it weird to say yes? Maybe? I come from a movement based background and love being a bit ridiculous, so I do feel it’s conducive to exploring comedy through the body without inhibitions. I have to say that Michael was by far the most physical actor in the show. I will definitely be ‘borrowing’ some of his moves for future shows.

The Shaw Festival is home to many an accent. Tell us about working on your specific British dialect for Sally.
We are so fortunate to have some bad-ass vocal coaches here. Truly world class! For Sally, I worked with both Jane Gooderham and Sarah Shippobotham throughout rehearsals and during the run for brush-ups. The coaches attend rehearsals and then we have private sessions with them to get down to specifics. I watched movies, listened to recordings, broke all of the vowels down and, since my husband [Jeff Irving] also had to learn the accent, we spoke that way to each other in our day-to-day life at home.

Do you have a favourite moment in the production?
My favourite off-stage moment of the play was waiting for my entrance into the dream ballet. Michael was leaning on a lamppost as four dancing couples swirled beautifully around the stage. They were all so captivating. I know I shouldn’t pick two, but I’m going to! My favourite moment on-stage was the moment before Michael and I move into the tap break during the “Me and My Girl” number at the top of the show. We got a quick check-in glance that said “Here we go!”

You also worked on Androcles and the Lion last season. What stands out in your memory about that production?
It was a moment before the play technically began. Our director Tim Carroll and musical director Paul Sportelli wanted to incorporate a number of musical elements into the show and one of those was the hymn “How Great Thou Art”. Patty Jamieson started us off and we slowly gathered into a circle at the centre of the stage from whatever section of the audience we happened to be chatting with that night. Connecting for that moment with those actors throughout the sadness and joy of the season really touched my heart.

What are you up to now/next?
Right now I am happy to be back at The Shaw after a great break visiting my family and friends in Saskatchewan. I am filled with love, feel like an auntie again and ready to go into a season of Grand Hotel and Oh What a Lovely War.

Do you have anything you’d like to add?
I would love to say thank you if you made it out to the show. Whether it was your cup of tea or not, thanks for supporting theatre. And also one more thank you for the lovely nomination. It was a great surprise and I’m chuffed to be included in this skilled group of performers.