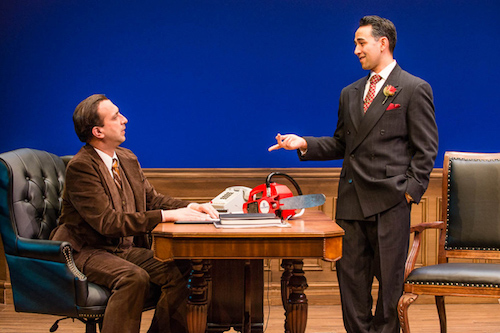 This was not my favourite season at The Shaw Festival. They had fewer bad productions than Stratford but they didn’t have as many great ones either. The best production of their season was a one-act playing sporadically at different venues, the second best a very limited run in the small studio space, then there’s a jump down to the second tier of shows that are definitely pretty good but also pretty flawed.

1979
The one truly great production at the Shaw this year in my estimation, this Michael Healey political comedy is also quite notably the only piece of Canada150 programming I loved all year from any company. Droll written exposition projected upstage provides key context and exposition to make the inside baseball storytelling accessible without bogging down the dialogue so that the action onstage can be 100% prime comedy and character work. Sanjay Talwar plays short-lived Prime Minister Joe Clark on the night of the fateful budget vote that would topple his administration. Marion Day and season MVP Kelly Wong play the various visitors to Clark’s office in a fast-paced, nearly real-time political and moral thriller. Maureen McTeer, Brian Mulroney, Flora MacDonald, John Crosbie, and a young Stephen Harper each make an appearance, played by Day or Wong or sometimes both with absolutely no regard for race or gender because it’s 2017 and get over it. The standout is Wong’s inscrutable Pierre Trudeau- a bright, energetic, ambitious, underhanded genius who steals the show, plays the villain, saves the country and does it all without anyone feeling the need to slip Justin’s name in anywhere (this small piece of restraint stands in remarkable contrast to a Stratford season that tosses out Trump jokes like beads at mardi gras). 1979 goes by quick (it’s only 85 minutes) but it’s the funniest, most compelling, most sneakily educational and thought-provoking 85 minutes of the season.

Middletown
This Will Eno drama about an unusual small town and the connections formed within it is brilliantly directed by Meg Roe with some of the most beautifully understated performances of the year and the single most mesmerizing scene of stage magic I’ve ever seen played on a non-proscenium stage (Karl Ang’s solo monologue delivered from space). Ang, Moya O’Connell, Benedict Campbell, Jeff Meadows and Tara Rosling all deliver wonderfully felt performances but it’s Gray Powell‘s broken and off-kilter performance as local handyman John that really stuns, including a final scene that’s too memorable for words. I’d love to see this one remounted for a Toronto run.

Me & My Girl
This was a dumb choice of musical. Not dumb in that it was not a smart financial decision (in fact it’s the season’s only real commercial hit) but just dumb in that there are so many good musicals that have an actual story and more than two memorable characters and more than one memorable song. It’s also slightly annoying to see incredible Shaw favourites like Jeff Irving dancing in the background so Michael Therriault could be brought in to play a lead he’s too old and not vocally adept enough for (although I’m very happy to report that the people I usually complain about being in the background of the musical- Jonathan Tan and Kelly Wong- have actual speaking roles elsewhere at the festival this year). But for all its annoyances, Me & My Girl is a fun time. Therriault is always so easy to root for and director Ashlie Corcoran makes excellent use of him by giving the hyper-physical performer tons of wacky tricks and falls and flips and nonsense that’s fairly delightful when the timing lines up just right. But it’s the “My Girl” who really shines despite her sad “bad Sandy” arc; Kristi Frank is a feisty ball of sparkly fire armed with a fun hat, excellent accent, and strong mezzo voice that totally steals the show.

Saint Joan
A dream cast of supporting actors that highlights the improbable bench depth of the Shaw company as built by Jackie Maxwell is what works best in this stylish mainstage production (Gray Powell, Graeme Somerville,Wade Bogert-O’Brien, Jeff Meadows, Jonathan Tan, Steven Sutcliffe, Ben Sanders, Benedict Campbell- how is it possible all those guys work at the same place?!). Tim Carroll’s direction and Judith Bowden’s design are also pretty fantastic, delivering scene after scene of surprising, affecting visual flair that could stand comfortably next to the most prestigious of international productions. This should have been the flagship hit of the year and the show that announced to the world that the TC era at Shaw would be its best yet. Alas, Carroll’s fatal flaw appears to be principal casting, especially of the “bring in my friend I’ve worked with before rather than mine the company for the talent that’s most definitely already there” variety. In this case he’s brought in Sara Topham, an actress I’ve rarely loved and whom Carroll has notably miscast before (he seems to get a kick out of asking this 41-year-old woman to play a teenager; it really is baffling). There always seems to be something standing in between Sara Topham and the audience, as though she’s covered over with a protective armour of training and technique. She’s technically on point but I rarely believe her and I never connect with her, a flaw particularly noticeable here where she shares many of her scenes with Wade Bogert-O’Brien (as Charles VII) whose style trends closer to bundle-of-exposed-nerves emotionality, and Gray Powell (as Dunois) who mumbles and tosses lines with the honest carelessness of an actual human who is speaking at the pace of thought. Neither of them has Topham’s clarity or poise but by god they can make me care. This production is so close to being extraordinary but, at the end of the day, Saint Joan is Joan; you have to pick the right Joan.

Androcles & the Lion
“Two way theatre” is one of the Shaw Festival’s new goals under its new Artistic Director. For the most part, this just resulted in unnecessary audience interaction before plays that have no need for audience interaction (a trope that literally gives some people panic attacks so maybe let’s not make the entire season interactive). In the case of Androcles, however, it’s a fully developed concept that pays impressive dividends. An 8-part system of participation makes each performance totally fresh and keeps the audience on their toes, suspending disbelief and forcing our imaginations to tackle practical production issues like elaborate set design and an onstage lion. It works in this production, in no small part because the more personal interactions one has with leading man Patrick Galligan the more one wants to follow him into battle (a valuable headspace for the audience to be in when shit starts going down for Androcles). The all-in almost school-play-ish aesthetic of this production is really creative and cool this one time, but I’m doubtful the concept has reusable impact.