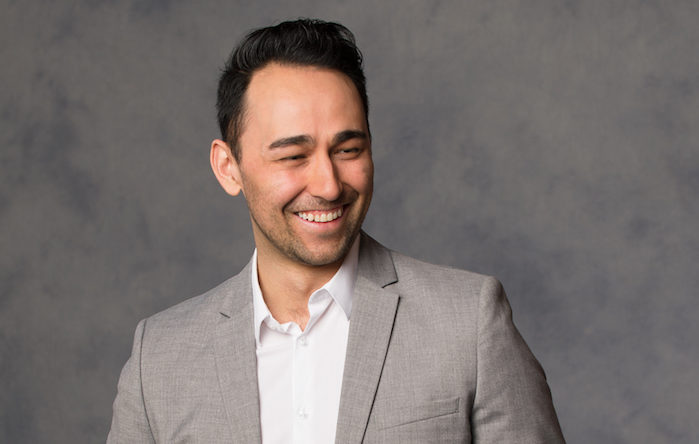 I used to say that Kelly Wong was one of my favourite musical theatre performers in Canada (I complained in almost every Shaw Festival musical review that he didn’t have a bigger role) but in 2017 he made his mark on contemporary non-musical theatre with two awesome multi-character performances. He’s nominated this year for Outstanding Supporting Actor for 1979, Michael Healey’s wonderful one-act set on a crucial night in Canadian history. Playing a number of key characters in the saga of Joe Clark’s downfall- including, most memorably, Pierre Elliott Trudeau- Kelly performed a highwire act of quick changes and character switches, crafting portrayals that lived up to legend but felt ultimately down to earth. He took a few minutes as he heads into rehearsal for another Shaw season of non-musicals to reflect on the performances that made me stop calling him one of my favourite musical theatre performers and just start calling him one of my favourite theatre performers full stop.

Do you remember your first experience with theatre?
My parents took me to go see Phantom of the Opera for my 10th birthday. I had been obsessing over the original cast recording for months. I vividly remember how excited I felt as I watched those actors bring the story to life. I wasn’t just watching it on a screen, it was happening right there in front of me… That being said, I also remember feeling mortified that my dad pulled out binoculars to get a better view of things… We were in row G.

When did you start singing?
I didn’t start taking singing lessons until well past childhood. I think I was 20 or 21? Back home in Calgary, Patrice Barnes took me under her wing and got me going in the right direction. For the past decade, I’ve been studying with Carol Forte. She’s a genius. She’s able to hear such minute details in my voice, knowing exactly how to keep me moving forward. For the longest time, I would just be trying to imitate the sound of others when I sang. Carol helped me discover my authentic singing voice.

What are some of your all-time favourite musicals?
I don’t know if I have a definitive favourite… I grew up on Rent, so it will always hold a special place in my heart.

Do you have any dream roles?
Alexander Hamilton! One can dream, right?

How did you get your start with the Shaw Festival?
I auditioned a couple times. Didn’t book it the first time around, was fortunate enough to get an offer the second time. When I first got the offer, I didn’t think that that would lead me to a second consecutive year, let alone a decade of work. Of course as an actor in Canada, you hope that a gig like the Shaw will come around, but I really didn’t expect that it would come that quickly out of theatre school. Especially with the way that diversity in casting was back then. It’s gotten a lot better, but back then, there were a lot more hurdles to overcome (remember the whole “Sharing the Stage” saga?). I am thankful and proud to be a member of the company and I try my hardest not to take it for granted.

In your time at the festival, what have been your favourite productions?
My two shows last year – 1979 and Wilde Tales. I think both of the scripts are so entertaining and a gift to the actors. Michael Healey’s words in 1979 were delicious. He constructed these arias for his actors that were definitely challenging to approach, but oh so satisfying to speak. And with Wilde Tales, Kate Hennig did a brilliant job of capturing the heart of Oscar Wilde’s stories and making them accessible to everyone. I know it sounds corny, but I could see how magical the show was for both the kids and their families who came to see us. With both of my shows last year, I really felt like I got to go to work and play.

You’ve mostly worked in musicals at Shaw but this year you were in two non-musicals. Did you enjoy getting to work in a different arena?
Yes! I mean, with any show, the job is ultimately to just tell the story… but with this year’s shows in particular, I was able to tackle dense, complex text while still finding a way to build a character from the ground up. I loved it! Don’t get me wrong, I love musicals and I look forward to the next time I get to do one, but it was a refreshing change to exercise a different side of my actor brain.

In both shows you did this year, you played multiple roles. What are some of the challenges of flipping between characters like that?
Technically, the speed of the quick changes was pretty crazy… But aside from that, playing multiple roles like that wasn’t necessarily challenging once we got into the swing of things. With both 1979 and Wilde Tales, I started by figuring out what kind of archetype I saw each of them as. For Trudeau, he was that smug, suave guy that you would meet at college parties. For Crosbie, I thought Lewis Black. Flora was a bit of a Nancy Kulp from the Beverly Hillbillies. The Swallow was my dog Charlie – the most loyal companion in the world. The Selfish Giant was straight out of a 1950’s Disney short. The characters were all so clearly defined from one another, that all I had to do was follow the road map that was given to me. Because they were all so unique and rounded out, I was never at risk of them bleeding into each other.

The characters in 1979 are all real people. When crafting your interpretation of each of them, how much was mimicry vs. imagination?
I’ve played characters based on historical figures in the past and I really enjoy it. You get to pick and choose what you want to take from their real life and what you want to inflate for the sake of the play. Before rehearsals started, I did my best to immerse myself in the world of these people. I knew very little of Canadian politics, so I was coming at it fresh. I read a number of books, watched documentaries, scoured YouTube for news clips… whatever I could to get a sense of who these people were. Then when we got into the room and started working on the script, we made the decision to let that research inform motivations and the details of the script, but ultimately throw most of it away. I wasn’t consciously trying to do an impression of any of them… more of a character than a facsimile. I wanted to aim for something more like what Melissa McCarthy did with Sean Spicer on SNL, as opposed to what Alec Baldwin did with Trump.

Do you have a favourite moment in 1979?
The whole experience of the way we ran the show was a bit of a wild ride. We rehearsed in Niagara on the Lake before heading to Ottawa to do a full run up there at the GCTC. Then when we got back to Niagara, our show hopped around from venue to venue before settling in the Studio Theatre at the end of the season. The variety of our playing spaces helped us become really flexible within the show to meet the demands for whatever the space called for. We did performances on all types of stages (proscenium, thrust, alleyway), at all times of day (early in the morning, at midnight), full length or condensed (we did a three minute whirlwind version on the back patio at Balzac’s as a part of Secret Theatre), in all types of venues (like Navy Hall – which was the site of Upper Canada’s first parliament) and in front of all types of audiences (including a group of very intimidating inmates at a maximum security prison).

Tell us a little bit about Wilde Tales and your experiences interacting with the kids for that show.
Sure! Before every show, we would lead a workshop with a group of children who would become a part of that day’s performance. We would teach them bits of a song, help them make props, guide them through certain scenes, and generally just integrate them into the show as much as we could in 45 minutes. My favourite part of the show was a moment when I, as the Selfish Giant, would come out and grab a sign that says “Trespassers Will Be Prosecuted.” I would get one of the kids to come up on stage with me, yell at me, go hang the sign up on the set and then sit back in their seats. Some days, the kid would be cute and shy, other days they would be bold and throw the meanness of the Giant right back at me… Either way, without fail, he or she was super proud as they sat down and the audience clapped for them.

You’re about to head back into rehearsals at the Shaw festival. What are you up to for the 2018 season?
This season I’m going to be playing Napoleon in Of Marriage and Men (maybe playing political figures is my new hit…) It’s a light-hearted Shaw double-bill looking at relationships in two very different ways. I’ll also be in The Orchard, which is Sarena Parmar’s adaption of The Cherry Orchard from a Canadian multicultural point of view in the 1970’s. I’m very excited to start rehearsals for both!