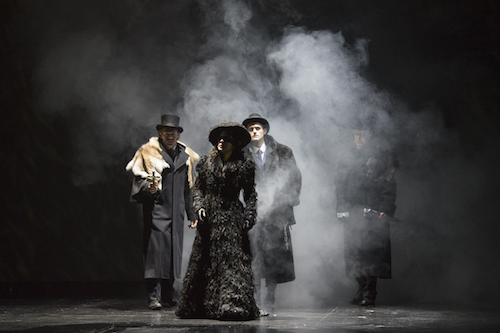 The thing to understand about the so-so list for The Shaw Festival this year is that they’re all pretty good productions; they mostly didn’t make the cut to be must-sees on account of the expectations game. All the over-promoted stuff of the year is on this list, the things that promised to be (had the buzz, the cast, the material to be) extraordinary but are merely pretty good.

Dracula
Director Eda Holmes‘ take on Bram Stoker’s classic vampire tale is stylish and suitably creepy with some really strong effects and great lighting design by Alan Brodie (projections by Cameron Davis). Liz Lochhead’s adaptation sets up an ambiguous world where our heroes are not quite heroes and our villain is almost entirely unexplored. That concept is intriguing but, in practice, it’s distancing, resulting in a cast of characters easy to observe coldly. Graeme Somerville’s vulnerable madman was the lone character I was particularly invested in seeing survive, an attachment without tension because the moment he’s introduced it’s clear that that can’t ever happen.

Dancing at Lughnasa
Scripts that call for a large cast of predominantly women are an eye-opening showcase for the ensemble that Jackie Maxwell built in her tenure at the Shaw. It’s such an incredible testament to the doors Maxwell opened for women at the festival that something like this melancholy portrait of sisters struggling to get by in 1936 Ireland could be cast almost entirely using star players who’ve been sharpening their skills on substantial parts in NOTL for years now (your average company has just one maybe two killer leading ladies over 35, the Shaw has many). Powerhouses Fiona Byrne, Diana Donnelly, Claire Jullien and Tara Rosling join forces with all-time charmer Patrick Galligan as he narrates his childhood raised by diverse, complex women. Tara Rosling shines especially brightly in my favourite type of role for her- wise in her wildness, wounded underneath her strength- though Sarena Parmar struggles to keep pace with the natural ease of the ensemble around her. Brian Friel’s play isn’t the most remarkable of scripts, nor is Krista Jackson’s direction particularly memorable, but there’s great joy and heart here.

The Madness of George III
I was expecting the world from this much-lauded history play, written by the great Alan Bennett and starring Tom McCamus who’s been imported from the Stratford Festival for seemingly no reason other than Tim Carroll likes him (there are a handful of such casting overreaches at the festival this year and I can’t help but feel that they shine a light on TC’s lack of familiarity with the company he inherited and the range of its many great stars). Alas, though the production is certainly serviceable, only Ken MacDonald’s set design- a lush and vibrant grand hall that fits the Royal George proscenium like a glove- left much of an impression on me at all. Tom McCamus is a powerful, kingly presence but vulnerability is not his strong suit and it’s the lynchpin that was missing for me in this production.

An Octoroon
Similarly, high expectations hurt this production when it failed to completely bowl me over. André Sills gives a splendid leading performance as playwright Branden Jacobs-Jenkins who narrates the action in the framing device that is also the play’s most captivating feature, and in the dual role of contrasting slave owners being played in whiteface by “BJJ” with the conceit that no white actors were willing to participate in his adaptation of the 1859 Dion Boucicault play The Octoroon (Sills is in whiteface, First Nations actor Ryan Cunningham in blackface and a memorably unleashed Patrick McManus does redface, all shocking visuals that don’t get any easier to see as the show progresses). Director Peter Hinton and designer Gillian Gallow pair to awe-inspiring effect on a few perfect images and Sills’ feat of playing both the season’s most terrifying villain (plantation owner M’Closky) and one of its most honest protagonists (BJJ) simultaneously is not to be missed, but the bulk of An Octoroon actually plays out in between these show-stopping pieces and it pales dramatically in their shadow.

Wilde Tales
This year’s lunchtime show is a series of short stories by Oscar Wilde adapted by the always brilliant Kate Hennig, all of them pithy, irreverent, and fun. Unfortunately the most prominent of these stories- “The Remarkable Rocket”, the one that’s told in multiple instalments and serves as a sort of frame for the rest- is by far the least effective, telling a meandering and silly story about a firework. But the others are all a delight, especially the story of a lonely giant (played by season MVP Kelly Wong who takes on multiple roles in both Wilde Tales and 1979), a very short story that packs the biggest emotional punch of the summer.