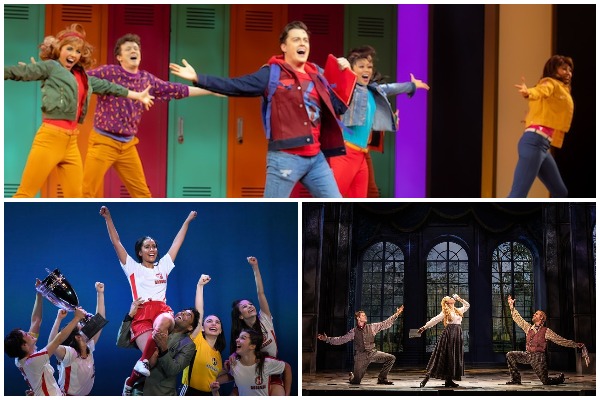 Shiny & Bright: A Holiday of Musicals in Toronto

It’s Christmastime, which means that many people are either celebrating beloved family traditions or searching for some moderately pleasant activity the whole family can agree on. The solution Toronto’s commercial theatre producers are offering up is musical theatre. And not just any musical theatre- big, shiny, happy, mostly stupid but very nice Musical Theatre.

The first of these is a genuinely great family tradition, one that’s been a part of my life for literally as long as I can remember. The yearly Ross Petty Pantomime is always a brightly coloured fractured fairy tale romp that pairs timely and hyper-localized jokes (some hilarious, many cheap) and top 40 hits with the oldschool structure of classic British pantomime complete with a campy drag character you like despite wondering if maybe you should be a little offended (these days it’s Michael de Rose’s “Sugarbum” taking over recurring character duties from Dan Chameroy‘s classic “Plumbum”) and a fabulously stupid villain you’re invited to boo (this year it’s Sara-Jeanne Hosie who is fantastic and also looks like she’s having the most fun anyone’s ever had, which is what I want from a panto villain). The superb Tracey Flye returns yet again with relentlessly high-energy direction and excellent complicated choreo for her strong chorus of dancers. Petty has a great eye for talent and a ruthless insistence on signing the best and buzziest triple threat talent in the country for his leading roles which means the panto is always excellently performed. This year that means a return for powerhouse ingenue du jour AJ Bridel who never disappoints and erstwhile Evan Hansen Robert Markus who is so charming and adept with high notes that I’m hoping his improbable Matthew Broderick-style second childhood lasts forever (seriously, directors, he is a grown man, why keep casting him as 17?). Returning writer Matt Murray brings refreshing substance and deeply nerdy in-jokes to the purposefully silly proceedings, making important points about education funding and special needs accommodation amidst deep cut Louise Pitre jokes and Backstreet Boy ballads. It’s all terribly silly but it’s also terribly good.

Not so good is the Bend it Like Beckham musical which just opened at the Bluma Appel. I don’t generally cover Starvox productions because their curatorial taste trends far more towards cynically commercial than artistically discerning but I love Bend it Like Beckham the movie so I put on my pink “the Legally Blonde musical is great; you never know” glasses and hoped for the best for this latest adaptation. Nope. It’s brutal. The songs are cheesy, repetitive, shallow, and occasionally seem to miss the point altogether (“Girl-Perfect” particularly bugged me since if there’s one thing anyone knows about women’s soccer it’s that they strive for perfection unmoored by gender qualifiers). The cast is a mixed bag with a few solid turns amidst mostly mediocrity. The standouts are Laila Zaidi who is a perfectly respectable Jess and, predictably, the Shaw Festival’s Matt Nethersole who is impossible not to love and doesn’t have nearly enough to do as supportive sidekick Tony. The choreography is simplistic to the point of goofy and the direction is amateurish, often resulting in characters just standing in a line. I’m getting tired of saying this but NOT EVERYTHING NEEDS TO BE ADAPTED!!

Which is not to say I begrudge the existence of the final musical on my list for today. Ahrens & Flaherty’s work on the animated film Anastasia is timeless, remembered by my generation with every bit as much fondness as the iconic Menken tunes from the 90s Disney canon in which FOX’s Anastasia is often mistakenly included. It was a natural thing to adapt and book writer Terrence McNally did so with admirable dramatic ambition, trading in the movie’s fun magical villain for a grounded and complex Javert-ish antagonist and giving more attention to the realities of the communist setting that the movie joyfully glosses over. Ahrens & Flaherty keep their biggest hits from the movie (their best tune “Journey to the Past”, an early ‘I Want’ song in the movie, becomes the pre-intermission showstopper it always yearned to be) and they smartly repurpose a few tunes that don’t quite fit into more affecting, useful sequences like a mournful chorus number about the love of country, though there are no true standouts from the wholly original pieces in the musical. In adapting Anastasia, a lot of really right decisions were made that should have resulted in a really pretty good stage musical but 2 + 2 doesn’t quite equal 4 somehow. It seems like a good idea to ground the villain in history and humanity and really grapple with the darkness of the story’s premise in a way the movie problematically didn’t but the fact that the movie so completely ignored the weight of its setting means that the bones of what was being adapted can’t support the intensity that the adapters want so badly for it to carry. This isn’t helped by a cast who completely is not up to the task. Joy Franz who plays the Angela Lansbury grandma part is comically broad, warbling her way through the songs and acting with a genuinely odd exaggerated pantomime style (at one point she dramatically mouthed “I don’t know” and literally did this gesture ¯\_(ツ)_/¯ ). Tari Kelly executes her task as Countess Lily well but said task seems to be “just do a Carol Burnett impression”, which is a tonal catastrophe. Jake Levy is a lovely dreamy Dmitry with a pretty tenor voice which was a saving grace but the new villain cuts into Dmitry’s stage time and, though he’s definitely the right dramaturgical choice in theory, Gleb’s material just doesn’t measure up to the original 1997 work. At opening night in Toronto, two leading roles were subbed out so, though none of his songs have much impact, the “not throwing away my shot” understudy intensity Brad Greer brought to Gleb was really effective. Not so effective was Taylor Quick who was in as Anya and was bad. Just bad. Just really really not up to the task- the acting, the singing, all of it- she was just bad. She was so bad that describing it accurately feels even crueler than the last few sentences so I’m just gonna opt out and say pray for Lila Coogan’s health (well, and, actually, I am going to take a beat to say that there are thousands of qualified triple threat young women out there who would kill for that understudy gig; it’s inexcusable to have a substandard ingenue when they’re so easy to cast). The Anastasia musical is incredibly frustrating, not because it’s not that good (though it isn’t) but because it should have been good. That said, it is important to note that, on most nights, it will surely be better than when I saw it.

SpongeBob the Musical is also in town, plus a truly excellent production of Cats you should see instead of the movie, and the thankfully omnipresent Come From Away which is both far more sophisticated and far more genuinely feel-good than the rest. And of course Soulpepper’s wonderful yearly production of Bad Hats Theatre’s original Peter Pan, which is really what you should see if you see anything this holiday season; it’s magical in all the best, least obvious ways.