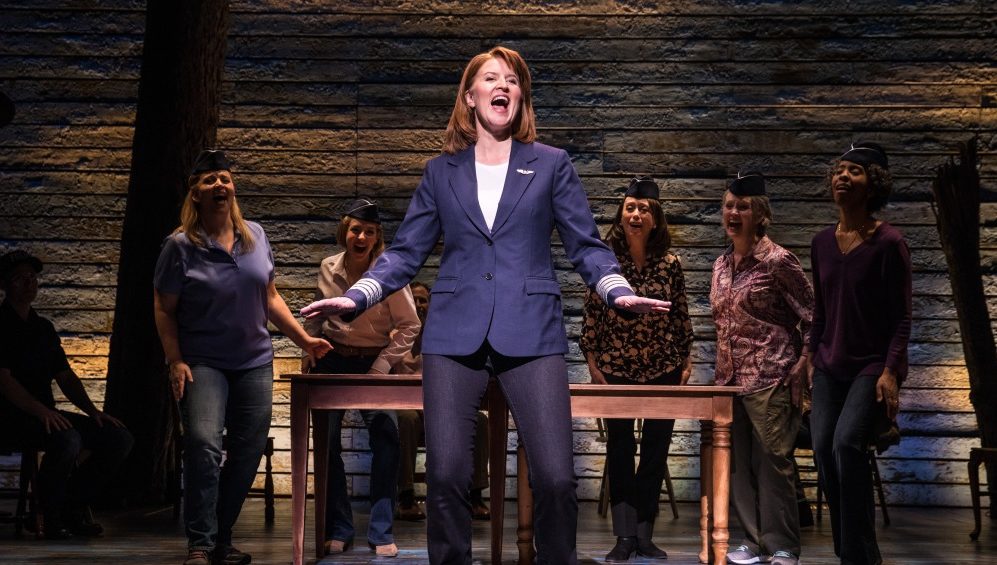 Come from Away‘s Canadian Cast Re-Opens at the Elgin

In the gloomy socio-political climate we live in, Come from Away offers beams of hope that even tragedy and despair can lead to long-lasting friendships and renewed faith. The show is delightfully foot-stomping from start to finish. Canadian duo Irene Sankoff and David Hein have created something equally original and insightful. Have your ever been stranded somewhere for a few hours and thought it was the worse experience of your life? What about being stuck with strangers in a new place, while practically being hoarded on and off buses and plains for an entire week? You may not look at the former so discerningly if so. I know I couldn’t do it. Luckily these “9/12” passengers – to make lighter of a devasting time in our world history – would soon discover the compassion and charisma of the people from the real town of Gander, Newfoundland, who will stop at nothing to help those in need, even when it means the population of their town doubles.

Some musicals are known for their dancing and some for their music, but here each ensemble member appears to be a triple threat, singing, acting, and dancing away their blues. A dozen performers play several dozen characters, switching from local Newfoundlanders to travelling passengers so smoothly you often don’t even notice they are the same performer. They embody each and every persona independently including perfectly articulated accents. It was so unanimously well done that I am afraid to highlight any one single actress or actor.

Some scenes are funny and others are more moving. In my opinion, it’s fantastic writing when you evoke a viewer’s shift between laughing and crying throughout a piece. Not only is the musical’s theme as a whole unique, but so are some of the special moments we witness. For instance, a powerful instant is when they turn the school library into a quiet place and members of different faiths from across the world come together to pray. Funnier is when Beulah (Lisa Horner) sends Oz (Cory O’Brien) to Shoppers Drug Mart to buy toothpaste and toothbrushes only to be sent back several times for everything from deodorant to diapers and baby formula. Beulah soon realizes tampons and pads may come in handy too! These folks really know how to think ahead and prepare for all circumstances. More enchanting are the romance stories like the one between Englishman Nick (James Kall) and Texan Diane (Barbara Fulton) who let their guards down ever so gently only to fall in love hard. Speckling the uproar are poignant moments such as when Hannah (Saccha Dennis) informs Beulah by phone, in the aftermath sadly, what became of her son that one scary day. And Bob (Kevin Vidal) contemplates what life will be like for him now back home in New York as a black man.

Some of the real individuals who were interviewed and inspired the characters written by Sankoff and Hein even made a surprise appearance on stage after the show. They may not be there again, but this homegrown gem is currently booking up until June 20, 2019. Come from Away truly has something for everyone in it. It’s a show you will want to bring your family and friends to. I know I will be returning.