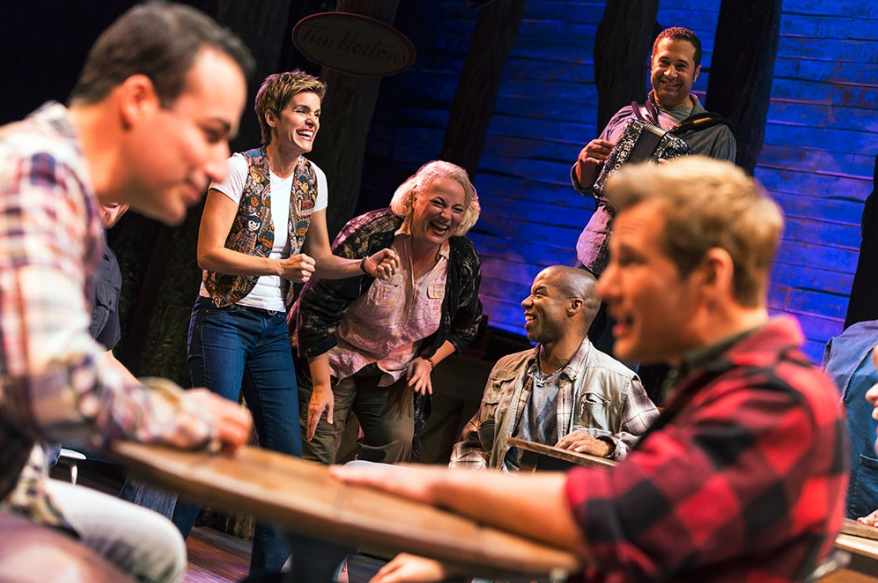 Sankoff & Hein’s Come From Away

“The world we live in today needs a good story”. The packed house at the Toronto opening of Come From Away had been standing for awhile when Claude Elliott, former mayor of the tiny Newfoundland town of Gander, said those brutally true words. We’d been standing since the second the lights went to black at the end of the new musical’s single 100 minute act. I couldn’t see them but I have a hard time believing that even my famously ovation-resistant fellow critics were left sitting. We literally leapt up, all 1500 of us in unison, and we stayed standing through a sweet speech by married writing team Irene Sankoff & David Hein, through the introduction of the real-life versions of the musical’s ensemble of colourful characters (a surprise for the actors who embraced their counterparts with joyful hugs and tears), and through Elliott’s inspiring words and terrible jokes (a delightful affirmation of the show’s “Newfoundlanders tell bad jokes” thread). We stood until the stage was clear and all there was left to do was leave. A part of me is surprised we’re not all still standing there, dabbing our eyes and grinning like idiots.

Nearly 7 years ago, the first theatre article ever published on this website was my review of Sankoff & Hein’s breakout hit My Mother’s Lesbian Jewish Wiccan Wedding. I loved that show; I still know all the lyrics to “Straight White Male”. MMLJWW was a great success story at the time- it came out of the Fringe, played at the Panasonic, even recorded a cast album- a rare trajectory for a wholly original Canadian musical. Their second outing is going to Broadway, on track to become the most succesful Canadian musical of all time (it’s coming for you, Drowsy Chaperone; just you wait). Come From Away has the same gigantic beating heart and unassuming charm that made MMLJWW so winning but its musical sophistication, storytelling ambition, and emotional impact outpace its predecessor from the opening chords.

Come From Away is a “light in the darkness” story, a feel-good triumph of the human spirit told in a pretty dark hour about an even darker one. During the first unplanned closure of North American airspace in history, planes from around the world were diverted to the town of Gander in northeastern Newfoundland. The airport in Gander was once an important refueling station for international flights but, by 2001, the 9000-person town could expect maybe 6 planes a day, tops. On September 11th, they got 38.

7000 stranded passengers descended upon the town confused, scared, and in need of food, shelter, and the entire contents of the local Shoppers Drug Mart. School teacher Beulah (Astrid Van Wieren) filled the elementary school with cots; SPCA worker Bonnie (Petrina Bromley) rescued 19 animals found in the cargo hold; bus driver union rep Garth (Chad Kimball) pulled his men off the picket line to help transport “the plane people”; local journalist Janice (Kendra Kassebaum) was the only reporter on the ground as the town nearly doubled its population in one day.

The 12-person cast all doubles or even triple as locals and outsiders, actually leaving the stage close to never. They’re all the caretakers (the mayor, Joel Hatch; the cop, Geno Carr) and the cared for. The plane people include a couple on the brink of falling apart (Kimball & Caesar Samayoa) and two singles about to find each other (Sharon Wheatley & Lee MacDougall), a mother panicked for news from her NY firefighter son (Q. Smith), a middle eastern man no one trusts (Samayoa) and a black man who trusts no one (Rodney Hicks). Dozens of characters appear, sometimes for just a line or two, the wholly excellent cast navigating the various performances with crystal clear distinction and carefully cultivated accent work.

An 8-piece band plays 16 instruments (including accordion, harmonium, uilleann pipes and bouzouki) in a clever, memorable score that blends regional flavour with classic musical theatre forms. “Prayer”, a stunning ensemble piece and the show’s quietest moment, interweaves iconic interfaith devotionals. Not long after, “Screech In” raises the show to its energetic highpoint, capturing Newfoundland quirk and delight with wild fiddle (Caitlin Warbelow) and foot-stomping at the famous ceremony which turns ‘come from aways’ into honorary residents. The strong ensemble’s standout performer Jenn Colella boldly follows such a rousing group number with a tight spotlight and a soliloquy belter that brings the style straight back to straight musical theatre. The only character whose full backstory we hear, here Colella is playing Beverley Bass, the first female captain to fly for American Airlines and the pilot of one of the Gander planes. In “Me and the Sky” we hear how Beverley fell in love with flying, and we’re reminded that this is all happening because someone turned the thing she loves into a weapon.

The next thing we hear is a pretty love duet. Then the triumphant call of “Somewhere in the Middle of Nowhere”, the song that’s stuck in my head the most. A full company chorus that encapsulates the joy and sadness and strangeness and beauty of the events, “Somewhere in the Middle of Nowhere” is the story’s conclusion and the biggest emotional release of the show. The over-wrought number that follows is, for my money, the only true weakpoint of the production, but a return to the chant-able melody that brought us into the show takes us out again and we leave on a beautiful declarative point of ‘this is who we are’ and a literal “welcome”.

“The world we live in today needs a good story”. Mayor Elliott is right. It’s been in development for years but Come From Away is coming up right now, at exactly the right time. It’s a story about Canadians reaching out a hand to our neighbours who have a tendency to think that they have to go it alone. They don’t. We’re here. All those people standing in that theatre were standing for a great show, an excellent performance, an important moment for Canadian theatre, but what pulled us to our feet was ultimately just a story about who we are, or at least who we want to be.

Come From Away plays at the Royal Alexandra Theatre until January 8th then it heads to Broadway. Go.