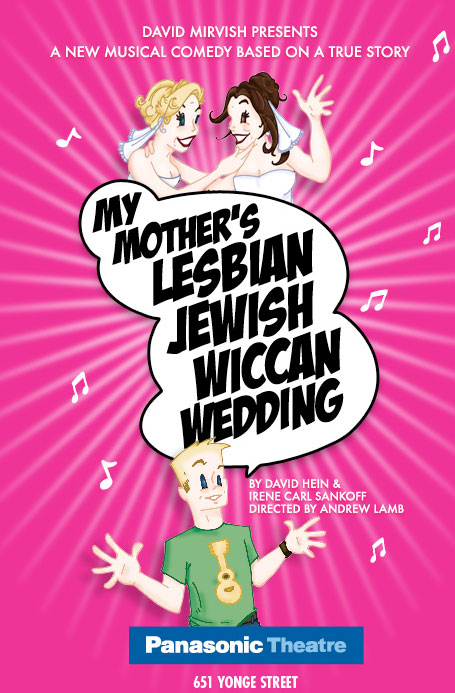 The Best Wedding in Town

In fact, the best SHOW in town, and perhaps the greatest thing I’ve seen in quite some time, is called My Mother’s Lesbian Jewish Wiccan Wedding. Playing now at the Panasonic Theatre in Toronto, MMLJWW is the latest great product of the Toronto Fringe Festival, the same festival that started The Drowsy Chaperone on its way to success. The funny, charming and moving musical premiered last summer at the Fringe, where it was spotted by theatre poohbah David Mirvish, who quickly brought it to the Panasonic for all to enjoy.
The one act musical, written by David Hein and his wife Irene Carl Sankoff, is the true story of Hein and his mother(s). A remarkable cast, led by Hein himself and the brilliant Lisa Horner as his mother Claire, give great life to the unmistakably beautiful story and catchy libretto. MMLJWW is one of those lovely modern musicals that’s both smart and funny, touching yet light, meaningful and thought provoking but never preachy.

Hein serves as the comforting narrator, much like The Drowsy Chaperone’s “Man in Chair”, but more successfully in my opinion. The audience likes him immediately, from the moment he steps prematurely through the curtain to usher the final latecomers into their seats. He then takes his place on a stool stage left with his band, from where he narrates, sings harmony and plays the guitar while he waits for the point in the story when he can take over from the actor playing “Young David” (Kyle Orzech). David, the character and the actor, in all his “straight, white male”-ness is uncompromisingly ordinary; extroardinary only in the endearingly compassionate way he deals with life changing revelation after life-changing revelation thrown at him by his ever-growing set of parents.

David is joined by an equally charming set of characters, each of whom garners enough pathos to fuel an entire show just on their own. Claire, whom the story is really about, is wonderfully neurotic as she worries about how her choices will affect her son. David’s father Garth is no less of a good guy for being the supporting player in a messy divorce story. David’s wife Irene (originally played by Irene herself before she moved over to premiere the new role of Michelle, giving the part of Irene to Lori Nancy Kalamanski) also serves as a fun yet grounding force in the story. But the real crux of the piece is Claire’s partner Jane (the remarkable Rosemary Doyle). Without the warm and earthy character of Jane, Claire’s entire arc would seem random and unlikely. As expertly written by Hein and Sankoff and portrayed by Doyle, Jane becomes someone the audience falls for right alongside Claire, thereby actively involving us in her emotional journey.

Simple direction and a clever sense of self-awareness pairs with the beautiful story and quick wit of the writing to make for an incredibly pleasant evening at the theatre. Canadians will love the many in-jokes about Beaver Tails, Toronto’s Don Valley Parkway and Ontario’s “wet cold” as well as the eye-opening song “A Short History of Gay Marriage in Canada”. You’ll sway along, smiling, to “Wiccan 101”, fall in love with “You and Me” and laugh until your sides hurt when you hear “Feelings are Important”, “You Don’t Need a Penis” and “Hot Lesbian Action”. You’ll fall in love with David, laugh awkwardly alongside a mother-smothered Irene and pine for a love as true as Jane and Claire’s.

My Mother’s Lesbian Jewish Wiccan Wedding will make you laugh, make you cry and make you sing in celebration when the characters learn of Ontario’s decision to “legalize love”.