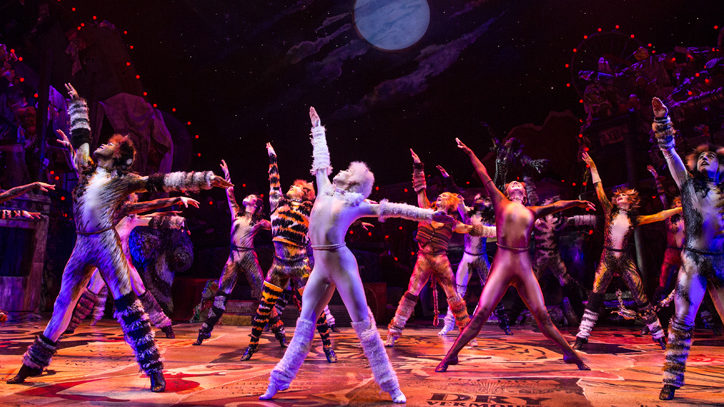 I’m going for a big metaphorical stretch here guys so I just need you to bear with me- seeing Cats live is like going to church. Inside the theatre you’ll find deep skeptics and true devotees sitting side by side with people who are only there because it means a lot to their mother. There’s music, chants, heaven-centric mythology, an old lady in a matted fur coat, and some guy named “Deuteronomy”. At times you will be bored (for the love of god, cut “The Awefull Battle of the Pekes and the Pollicles”; awful is right there in the name!). You will be asked to buy into something that defies logic, that seems silly, that’s maybe a little archaic. There is no room in the Cats theatre for your millennial cynicism, the desperate practicality that governs your 2019 life by necessity, and our obsessive need to believe only in what’s provably true and good lest we seem anything less than sophisticated, discerning, and clever. Cats asks you to leave doubt at the door and enter a place of mystery and communion where the faithful will be rewarded. Cats can make you a true believer if you let it.

The title of this piece is “Cats, the musical” because in a month or so I plan to write a companion piece entitled “Cats, the movie”. Hypocritical though it may be in relation to the preceding paragraph, my cynicism is through the roof when it comes to Tom Hooper’s movie adaptation. The trailers suggest they’re making it goofier and less experimental with more explicit jokes and a cleaner narrative thrust, turning wordless white cat Victoria into a leading ingenue and centering the villain Macavity to make Cats‘ poetic vignette structure fit into a comforting conventional storytelling framework. But Cats isn’t conventional. It’s weird. Really really weird. And the intellectual surrender required in order to tolerate that level of weirdness is part of the experience. The premise sounds goofy but the material is completely earnest. It’s not ironic; they’re cats, get on board. Filling Cats with jokes and structure that will make it go down easier will only soften its impact, make it land in some liminal space between what makes sense and what challenges your conception of what “sense” even is. Cats is too weird to normalize successfully so any attempt will merely pull back its exuberant nonsensical specialness.

The production currently on tour in Toronto is unabashedly Cats and if you don’t buy in the second the glowing eyes start appearing in the dark, you’ll be left behind faster than you can attempt to pronounce Munkustrap. John Napier’s iconic costumes are as beautiful as ever, pairing with Andy Blankenbuehler’s thoughtful resetting of Gillian Lyne’s original choreography to create the mindbending anthropomorphic effect at the centre of Cats‘ visual feast.

There are few musicals known as much for their dancing as their vocals, or vice versa, and the ones that do genuinely draw on all prongs of the triple threat tend to separate the performers into specialists- Bernardo dances, Tony sings. Cats, on the other hand, demands everything from its cast, Andrew Lloyd Webber’s sublime score requiring expert vocals often delivered in the midst of elaborate choreography the like of which is incredibly rare in the musical theatre landscape (you need to see a cardiologist if “The Jellicle Ball” doesn’t raise your heartbeat). Act one showstopper “Mungojerrie and Rumpelteazer” is a particular feat of athleticism and breath control as Justin W Geiss and Rose Iannaccone tumble about the stage in spectacular fashion while simultaneously narrating their own adventures in song. In the tour, troublemaking slickster Rum Tum Tugger is played by former National Ballet of Canada principal McGee Maddox, who has always played every role a little bit as if he was playing Rum Tum Tugger. Though everyone does everything in Cats, Rum Tum Tugger is more of a singing role than a dance one and it’s a testament to Maddox’s excellent vocal performance full of smooth musicality punctuated with showy growl that I didn’t spend all my time trying to pick him out in the crowded group numbers to focus on his dancing (he comes out after curtain call with a balletic trick or two but it’s hard to say if that’s a permanent character bit or a mini showcase just for Toronto’s benefit on opening night).

There are only three tracks in Cats that don’t require best-of-Broadway dance skills. Here Timothy Gulan doubles as both Bustopher Jones and Gus the Theatre Cat without making much of an impression and Brandon Michael Nase sings Old Deuteronomy well but lacks the gravitas that would be easier to capture if they cast someone at all close to the right age to play the community elder. I was fully prepared to make the same argument about Keri René Fuller, the latest in a long line of beautiful young Grizabellas. The tendency to cast ingenues at the start or height of their careers as the declining Glamour Cat has always baffled me (Elaine Paige was 50 when she played the role in the perfect 1998 filmed performance, which always felt much more appropriate than Jennifer Hudson/Leona Lewis/Nicole Scherzinger) and Fuller most definitely doesn’t look the part. But then she sang.

I started this piece talking about church, an idea that came to me during “Memory”. Nailing that song is a feat like nothing else- it’s arguably the greatest work of arguably the greatest musical theatre composer of all time- and here was this confusingly young woman with a single non-regional credit to her name, crossing the stage in front of an extraordinarily talented ensemble to sing a song the whole audience knew by heart whether they wanted to or not. And I swear to god it felt like praying. Not just those big notes at the end of the reprise, though those are nothing short of holy, it’s all of it- the dark grumble of the impossibly low verses, the sadness in a meticulously decrescendo’d high note. Fuller lets her voice waiver where it needs to with the confidence of a performer who takes for granted that she has the audience’s full faith. She lets us hear her breathe. And when those notes finally come, the superhuman power of them sweeps through the theatre but the character’s feet stay firmly on the ground, rooted by the humanizing weakness Fuller made the conscious choice to let us see in her Grizabella.

I never enter the Cats theatre full of faith. I intellectually remember that “I really like Cats, always have” but I see the comically sized set pieces and the weird glowing goggles off the top of act one and I let the doubt creep in- “wait, is this the stupidest thing in the world? Am I just being nostalgic for 5-year-old me who loved Skimbleshanks more than anything?” But then, every time, I choose to give in. I choose to believe. I choose to stop worrying that the story is all over the place and the premise is bananas and there are so many more practical things to engage with. Cats is a bizarre, uplifting, mesmerizing feat of imagination and ability. It can expand your understanding of what’s possible, you’ve just gotta have faith.