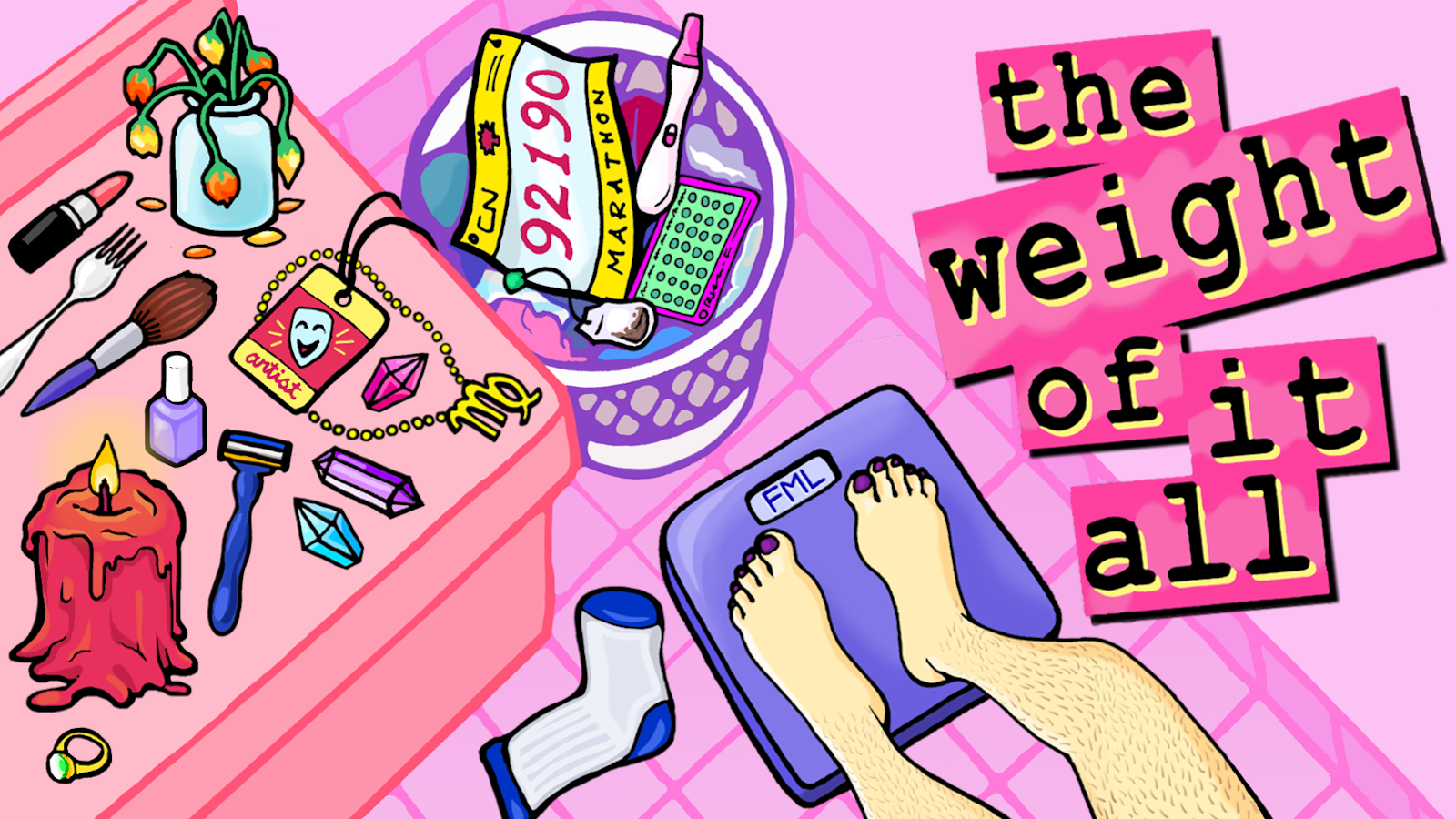 The Weight of It All (A-)
Gillian Bartolucci’s latest solo piece plays out more like a one-woman sketch show than a straightforward narrative. With a captivating mix of exuberant energy and relatable exhaustion, Bartolucci jumps between characters, styles, gimmicks, and perspectives as she touches on some of the absurd lowlights of modern womanhood from weight loss pressures to the biological pain of various common-but-undiscussed disorders to the emotional trauma of infertility (expressed in a particularly touching extended metaphor about a broken Keurig machine). Even the piece’s silliest bits (a mom-led aerobics class packed with insidious shame, a dance routine or two) ring with truth and vulnerability that makes The Weight of It All so much more than the romp it tonally appears to be at first glance.

Three Men on a Bike (B+)
On the other side of the coin, this Three Men in a Boat sequel is every bit the romp it appears to be and never claims to be anything else. It’s pure silliness of the total nonsense variety and if it can’t bring a smile to your face I’m not sure anything could. Mark Brownell’s 75 minute script could use a trim and a punch up but the cast is so immensely charming that they handily carry all the nothingness as they scamper their way across the German countryside on a series of misadventures. Between the Three Men series and Bad Hats’ Peter Pan, Matt Pilipiak is quickly becoming the best fourth-wall-breaking narrator on the scene, his impeccable timing punctuated by Victor Pokinko’s dry wit and fun physicality as the delightfully lazy George (an interchange about who should carry “the George burden” on their tandem bicycle trip is a highlight). They’re joined in this incarnation by a new Harris and, though I missed the original’s quirkiness, there’s a winning pathos in David diFrancesco’s wide-eyed take on the role and it certainly doesn’t hurt that his is one of my very favourite singing voices in town. Early on in the sequel there’s a metatheatrical discussion about the narration that touches on the claim of Pilipiak’s Jay that he is the “main character”. Pairing that intriguingly debatable but quickly dropped notion with another early scene in which Harris considers the idea that Jay and George may not in fact be his best friends, one gets the feeling that there were slightly deeper character and relationship considerations Brownell flirted with exploring before opting to stay in the patented Three Men lane of inconsequential fun. Sometimes inconsequential fun is exactly what the doctor ordered but I couldn’t help but wonder if allowing for just a touch of friction might have helped a mostly breezy downhill ride.

Drama 101: A New Musical (C+)
This earnest new high school-set musical featuring a cast of actual teenagers from Bravo Academy has an expected emotional impact on anyone whose nostalgia is peaked by its tropey drama club beats. That’s a world so many people who make/review/attend theatre cherish warmly in hindsight but in the moment is filled with drama and heartbreak and social politics that are barely even glanced at in this Glee-ish tribute to finding a place where you belong and the teacher who inspired you to be the best you you can be. There’s worthy sentiment at play, and a worthy message about education funding, but the extremely weak book and middling songs over-simplify the world they’re portraying and the complicated kids who populate that world. Also, don’t pretend high schools can do Hamilton; a better version of this musical would have let the kids be frustrated that they’re always stuck doing Grease. Drama 101 is about the power of finding a good thing in a hard world and the importance of fighting for that thing but the kumbaya simplicity of the show in execution doesn’t begin to capture what theatre kids are dealing with and capable of.