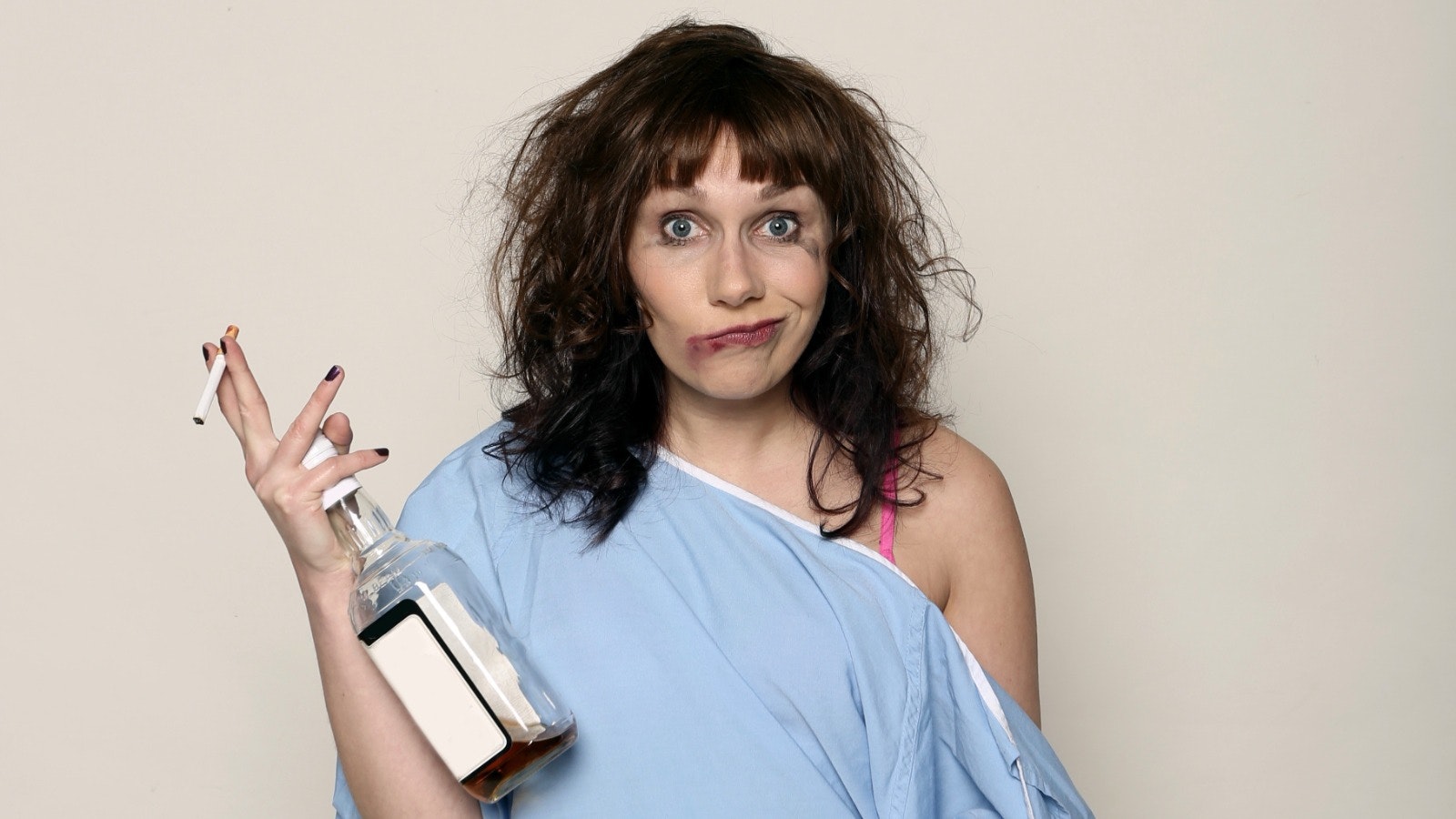 Katharine Ferns is in Stitches (A)
Get ready to laugh. Get ready to cry. Get ready to do both at the same time. This is dark comedy that is surprisingly uplifting. Katharine Ferns lays out her past, which is pretty horrible, on the table for all to see. She talks about her drug addiction, domestic violence, surgery gone wrong, dismissive parents, and the impossible expectations of women to be perfect. The authenticity and realness of everything that Katharine Ferns says is heart wrenching. And also relatable. Even if you haven’t been a victim of domestic abuse, how she presents the logic of why she stayed with Ninja Mike (yes, that’s what he called himself) is clear and relatable. In addition to being an excellent show, the performance I attended had the additional drama of an audience member having a mild seizure. While the audience member recovered quickly, so did Katharine. She was able to step right back into her show, pulling her captivated audience back into the unfair world of being a woman. It was a demonstration of exceptional performance ability. This woman is unbelievable in her bravery to tell her story. For an emotional roller coaster, this is the show to go to.

Follow Me (A)
It was pretentious. It read like theatre school exercises being looped together for a play. It was confusing. And it was absolutely enthralling. The performance centred around a long thick piece of red string that the performers moved in and out of. They played cat’s cradle with their bodies, reciting text, in a bewildering dance through the red string. The text, which was a compilation of mini moments, almost vignettes, functioned as rhythm for the pieces so that the actors could move within an established beat. Commitment to the piece was exceptional. That was what made it so enthralling. These was never a moment when the performers fell out of their world. This was done without character specifics, without a plot, and without other tools used to engage the performer. To conclude, the performers didn’t come out for a final bow, leaving the audience to question what to do with themselves. This action showed me that the performers are not in this industry to receive accolades but want to create work that stands for itself. On this front, they were successful.

Circus Shop of Horrors (B)
Circus Shop of Horrors is a satirical tribute to horror movies, taking pivotal moments and reenacting them in a larger narrative. What this show has going for it is great comedic scenes and skilled circus performers. Card tricks, aerial feats, fight choreography, magic… the show is filled with crowd pleasing spectacle. Who doesn’t want to see a hell demon in a sparkle costume do aerial hoop? (And that costume, horns and all, was exquisite.) In the tradition of circus shows- think Cirque Du Soleil- the overall plot was flimsy and nonsensical. This resulted in a cabaret feel which was enhanced by humour that walked the line of being distasteful. Gingerly walked the line but never crossed it. There were many things in this show that should have made it fail: weak plot, poor scene changes, inability to hear actors’ lines, poor acting, but the strength of the circus and stunts, the playfulness of the performers, and the great humour overpowered all the negative elements. This show is a good time and will fill you with awe and laughter.

Nullius in Verba (C+)
The program for Nullius in Verba outlines that it is an exploration of power, so of course the first dance was an exploration of corporate work. Over the course of the dance, the artists get dressed for their corporate work and then stripped down again. While there were moments in this dance that were nuanced and demonstrated that these dancers were extremely talented, it lacked connection to the audience and was difficult to watch. The music choice was likely a culprit in the lack of connection as it was a soundscape that was jarring and off putting. The second dance was an improvement with two dancers taking the baseline and letting it roll through their bodies. They were masked, adding a fascinating aesthetic, and, I suspect increasing the difficulty of the dance. But for the third dance, it returned to self indulgent work. Worshipping a bowl of water, the dancers again showed skilled but were difficult to watch. I’d actually like to watch this show again but with a different soundscape. The static of a radio between stations, setting the stage for the rest of the acts, may have been the culprit for why this show read so poorly.

The Joy of Sax (C)
The storyline of The Joy of Sax had the possibility of being brilliant or brutal- Duke (Cam Parkes), formerly known as Luke, has a special talent. His ability to play the sax creates uncontrolled orgasmic euphoria in his listeners. Unfortunately, it was brutal. The narrative meandered through events without plot motivation or character development. From start to finish, Duke, our main character, displays no evolution in his personality despite unleashing a powerful, potentially mythical, ability to cause orgasms. The euphoria Duke’s listeners felt was base and unexplored with the exception of his religious parents who spoke in tongues instead of the ultimate O. The Joy of Sax had the potential to be hilarious, mingling music, jazz, religion, and pop culture. But it wasn’t. The initial joke of watching individuals writhing on the floor in pleasure got old quickly as Duke continually had the same interaction. Sex, in it’s multitude of forms, beautiful, ugly and everything in between, was presented in The Joy of Sax as a one trick pony. For this show to truly resonate, sex and pleasure need to manifest in a variety of ways. There needs to be more nuances in the humour. There needs to be growth in character.

Dead TALKS (D)
Dead TALKS brings together a sexual predator Ben (Josh Morris) and one of his victims Sylvia (Kimberly Wells) in Purgatory. The objective is to therapeutically work through their past, using each other and a guide (Maxx Finkelstein) to resolve their issues, with the intent to be reincarnated as a fresh new person. Rape is a tough subject to tackle and should be done with delicacy and skill. It is absurd to think that putting a rapist and their victim into the same setting would be a good way to move forward. The premise reads like a Jerry Springer show. The storyline didn’t provide any new insights into the #MeToo movement nor did it provide entertainment. The writing seems to be the main issue for this play as there were moments when the cast shone. The Guide did an excellent job within her limited role and Ben was cast exceptionally well as a creepy middle aged man. At the end of the many short scenes, the actors manipulated the set for the next scene. It sounds pretty normal but it was distracting and the set changes were minuscule, not warranting the distraction.