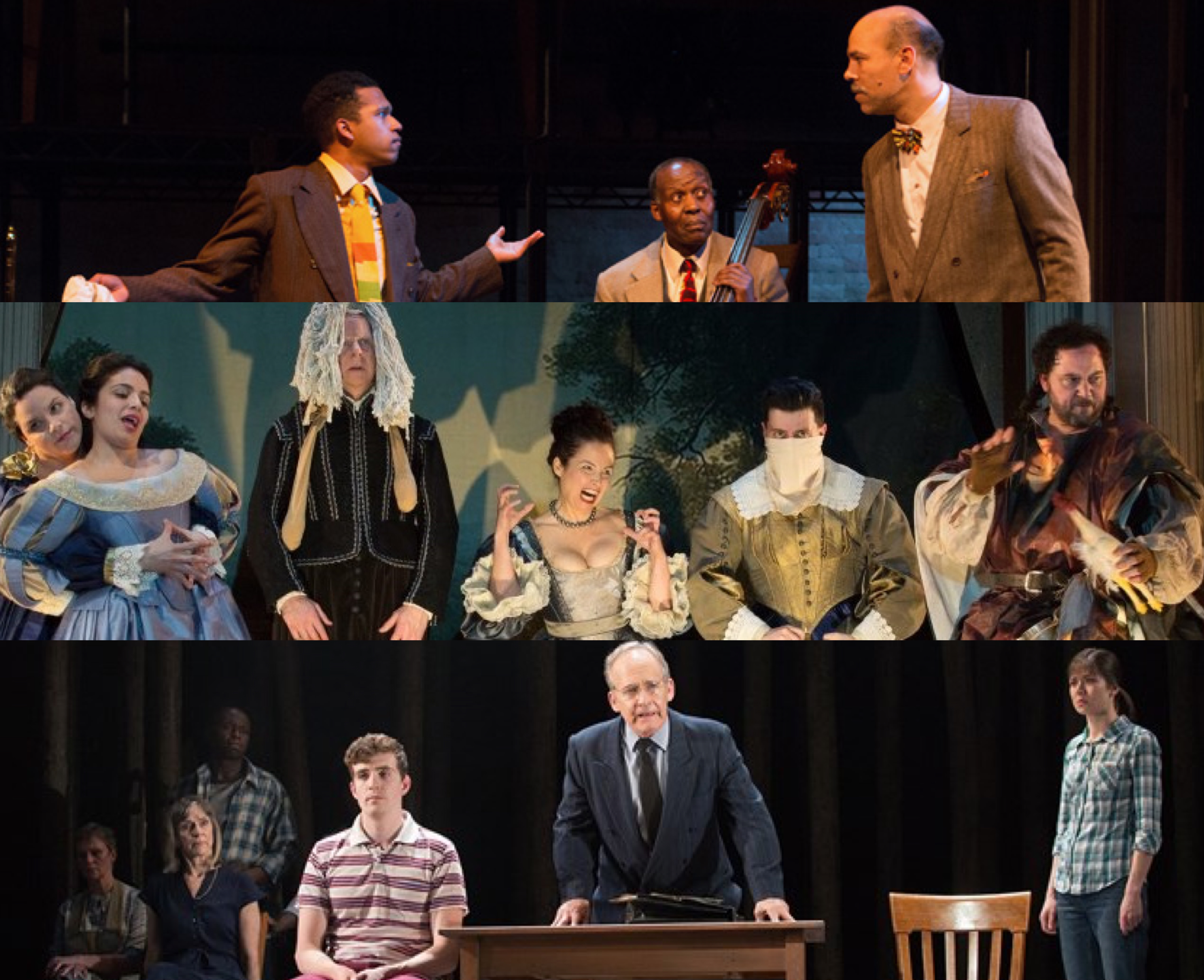 Walk into the Young Centre and buy a ticket, it doesn’t matter to what. Soulpepper Theatre has three productions running right now and, for the first time in memory (and my memory stretches back much further than a few months), they’re operating at full power.

The company has always sought balance in its repertory seasons- a challenging contemporary piece presented alongside a period farce and a dependable mid-century drama, for example, something for everyone- and that recipe is certainly still observable, but this particular set of productions feels different. Because it is different. The challenging contemporary piece- Beverley Cooper’s Innocence Lost– is a sharply critical Canadian story. The dependable mid-century drama- Ma Rainey’s Black Bottom by August Wilson- is an African American story by an African American playwright directed by an established African Canadian talent. The period farce isn’t so much a farce as a brilliant (and sneakily moving) satire of theatrical practices and the dangerous link between patronage and cult of personality artistic enterprises. That last one- David Hirson’s La Bête– was a late addition to the season, replacing yet another planned Aykbourn remount with an all-new production. La Bête‘s inclusion in the season is bold and self-aware, contrite even, and multiplies in potency with the inspired casting of a woman in the role of the belittled hero. All three productions are directed by women. All three productions feature performers of colour. All three productions have roles for new talent making their Soulpepper debuts, but they’re making those debuts alongside the beloved Founding Members and Resident Artists and Academy Graduates who never left the building they helped to build (and I hope they never do). It’s as if the doors to Soulpepper have finally been thrown open and the fresh air has filled the Young Centre theatres with something really special.

Innocence Lost: A Play About Steven Truscott is an intriguing blend of verbatim and traditional styles. Most of the characters are real people and Jackie Maxwell’s direction of the cast members playing multiple roles has the broad-strokes style that is a verbatim signature but a few key notes of fictionalization played with total realism create affecting balance and highlight the emotional truth amidst the murky facts of a tragic true story. In 1959, the brutal murder of a 12-year-old girl in rural Ontario sparked rash outrage that led to the unjust conviction of a 14-year-old boy named Steven Truscott who was sentenced to hang for a crime he was linked to by little more than circumstance and fury. The production moves fluidly through the time and space of the story as the characters narrate the facts directly to the audience, or at least what they remember as the facts. The characters are broad sketches of people and the scenes are short hypotheses of what might have happened. Dan Mousseau plays Truscott with vague charm and thoughtful restraint, as though none of our narrators could remember with much detail what he was really like. The one richly developed character onstage is Cooper’s only complete invention. Our principal narrator Sarah is played by Courtney Ch’ng Lancaster with all the specificity and complication that the other characters purposefully lack, embodying in the form of an everygirl bystander the journey of doubt and guilt and worry and regret that the audience mirrors throughout the play. Lancaster is one of the anchor artists whose presence reminds me why I fell in love with Soulpepper in the first place and why my optimism about the company hasn’t wavered. There are a few such anchors (the others are Gregory Prest and music director Mike Ross) and they all play key roles in this spring repertory season, representing the best of what Soulpepper has been, and still is, as they welcome in new voices to usher in a new era.

Perhaps the most exciting of those new voices belongs to Lovell Adams-Gray, a man who cannot play the trumpet worth a damn but otherwise gives a performance so extraordinary as aspirational musician Levee in Ma Rainey’s Black Bottom that I swear it belongs in the Soulpepper hall of fame (for me personally, that’s Prest in Long Day’s Journey Into Night, Joe Ziegler in Death of a Salesman, and Damien Atkins in Angels in America, keeping in mind that I didn’t tune in until 2011). Adams-Gray is surrounded by a strong ensemble (particularly Beau Dixon and Neville Edwards, brilliant and true as his long-suffering bandmates) and Mumbi Tindyebwa Otu’s direction of this early August Wilson masterpiece is steady and empathetic, but it’s that supernova performance at the heart of the thing that makes the piece unmissable.

The final (and my favourite) piece of the current repertory puzzle is also a matter of a delicious, resonant script and smart direction bolstered by performance but the magic of La Bête lies in the balance of two actors in contrast, both at the very top of their game. The more bombastically noteworthy of the two is Gregory Prest who enters act one like a bull in a china shop and speaks uninterrupted for a full half hour in a stunning display of endurance and sheer dramatic exuberance the likes of which I’ve never seen. One of the great delights of the past seven or so years covering Soulpepper has been seeing the evolution of Prest from wunderkind Academy grad to go-to leading man to multi-hyphenate Resident Artist. Singularly friendly and self-effacing off-stage, Prest has counter-intuitively developed a speciality for playing characters who flirt with unlikeability (Philip Carey in Of Human Bondage, Louis Ironson in Angels in America), a casting trend I’ve argued has something to do with the audience’s willingness to take his side despite the alienating foibles of his varied but often highly flawed characters. Prest as Valere- the titular beast in Hirson’s pointed play, more a symbol of corruption than a character at all- is an inspired piece of casting that amusingly and insightfully tests the limits of how far down the rabbit hole of bad behaviour the audience will follow an actor on charisma alone. It’s also just a monster part, technically speaking (though also thematically speaking), that demands a company’s best man and that’s something Gregory Prest has been at Soulpepper for quite some time now.

As-written, La Bête is a feast for male performers. It’s the story of a male artist (Elomire, a not-so-disguised Molière figure) whose male patron (Prince Conti, but really every complacent subscriber or entitled donor in theatre history) forces him to work with Valere, an obnoxious, self-satisfied, and deeply untalented male figure whose overblown confidence and unapologetic narcissism have Emperor’s-New-Clothes-ed him to success I would call improbable except that it happens all the goddamn time. What director Tanja Jacobs has done with her relatively straightforward staging is reassign, and thus recontextualize, the roles of Elomire and Conti, making them female characters played by Sarah Wilson and Rachel Jones respectively. I’m not sure that the move from Prince to Princess, despite Jones’ strong performance, does all that much to enrich the themes (I mourn a bit for the “boys club” commentary that might have been) but one might have noticed that when I talk about Soulpepper, its great artists and its best performances, I talk mostly about men. The company has never done a good job of programming work with great roles for women (even Ma Rainey is an overshadowed figure in her own show) so I’m happy to trade a little subtext away if it means Rachel Jones gets in the door.

But even if the roles were reversed and the ladies of Soulpepper were swimming in great material (haha), a female Elomire is a game-changing piece of directorial insight that triggers an avalanche of resonance that likely never even crossed Hirson’s mind. It hits harder on this particular stage, the speeches spoken by a particular actress who’s been undercast and overlooked for years in this company, but I think the effect would hold if performed anywhere in 2018. The way Elomire is spoken over and disregarded and talked about as though her valid, thoughtful criticisms are emotional over-reactions, it reads like a purposeful parable of women in the workplace. Though the intended commentary on the rise of mediocre artists is poignant in and of itself, post-2016 it feels crucial that said commentary speak more widely beyond the arts to the rise of mediocre men over qualified women in every field. Sarah Wilson is fantastic in the role, grounded and clever and wryly incredulous in a way that breaks your heart as it makes you laugh. Though I’ve seen her many times, it wasn’t until 2018 that I ever really saw Sarah Wilson. Animal Farm (in which she played Leninist pig Snowball, brilliantly) was my big wakeup call moment that, just because she’s often been cast as just a pretty face, doesn’t mean she is just a pretty face (something I should have known but somehow still didn’t). But this is something else entirely; this is all-star play from someone who’s been kept out of the starting lineup for too long. Because Tanja Jacobs knew enough to put her in the game, Sarah Wilson is the clutch performer at the heart of the best production of the best Soulpepper season in years.

Tickets are available HERE. I don’t care what you see, just see something.