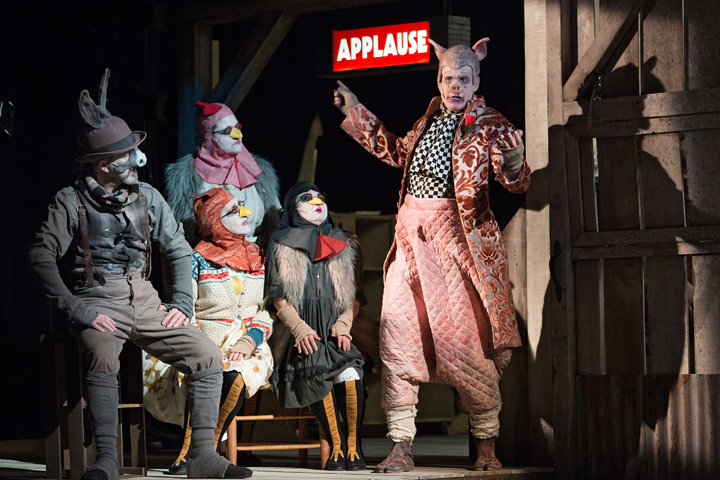 Soulpepper’s going to be okay. I really believe that, and certainly I hope it. They’ve weathered the kind of storm that would have easily levelled a lesser company but there’s an army of incredible artists who still call the Young Centre home and they’re back onstage as we speak, proving that there’s more to the place than one man’s legacy. Idomeneus and Animal Farm are the first real productions of Soulpepper’s post-Schultz era (A Delicate Balance was already well into rehearsals when news broke of the lawsuits against him) and they’re heralds of a promising future.

Though they were programmed before the controversy, both productions feel like they directly address it (perhaps they all will, at least for awhile). Idomeneus features an ensemble of familiar Soulpepper faces, notably including some who’ve been outspoken on the front lines of this thing. The group works in total harmony as they attempt to make sense of the battle they’ve just survived (that’s the plot, but also the subtext). Soulpepper’s resident designer Lorenzo Savoini‘s done some of his best work ever in partnership with costume designer Gillian Gallow to create the visual impact of this war-torn land. The narrative uncertainty in Roland Schimmelpfennig’s adaptation (translated by David Tushingham) is haunting but the script is far from a masterpiece. Faced with a text that tells everything and shows little, director Alan Dilworth (the associate artistic director who stepped up to lead the company in Schultz’s wake) has asked a lot of his team- his excellent cast, his brilliant designers, his steadfast technicians- and made something beautiful out of the ruins.

But it’s Animal Farm that really fills me with hope. A big, bold, intense, ambitious piece of full-throttle theatre, this Orwell allegory about corruption that breeds in a society built on good intentions is the sort of gamble that makes Soulpepper worth fighting for. Adapted by Soulpepper Academy alum Anthony MacMahon and designed with insightful creativity by Soulpepper Academy alum Ken MacKenzie, there’s a real “look what our people can do!” sense of achievement in how improbably well the play works. Company mainstays Oliver Dennis and Raquel Duffy deliver funny and heartbreaking performances as Boxer the Horse and Mercy the Chicken, and Sarah Wilson completely transforms for her affecting turn as Trotsky stand-in Snowball, one of the pigs who leads the Animal Farm after the anti-‘Farmerism’ rebellion. Rick Roberts tops them all as Napoleon, the smooth-talking power-hungry casually abusive pig who rises to power and makes sure everyone knows who’s in charge. It’s an astounding performance from Roberts, so detailed in his ugliness and deliberate in his psychology that he almost starts to make sense of our slew of modern monsters. He’s simplified for allegorical purposes- he is, quite literally, a pig- but we recognize him nonetheless for the many far-too-real men he represents. You have to buy in to a live-action Animal Farm and choose to seriously focus- there’s a surreal silliness to it all, the voice modulation is pretty alienating, and it’s distracting how darn cute the sheep are- but the rewards are remarkable.

Animal Farm stars a diverse cast that mixes Soulpepper favourites of all ages with newcomers and standouts from other companies; it was developed and designed by talent fostered in-house; it was directed by Ravi Jain, the clear-eyed and progressive multi-hyphenate whom many are hoping might take over the company. It’s a testament to what Soulpepper can do, because Soulpepper is more than just one person- it’s hundreds of artists and administrators and support staff and patrons and people who spoke up on behalf of the women who spoke out, and people who are dedicated to making things right and making things better. The company still has a lot to answer for but, in Idomeneus and Animal Farm, they’ve shown that they know that. They’re owning their battle scars and they’re marching on.