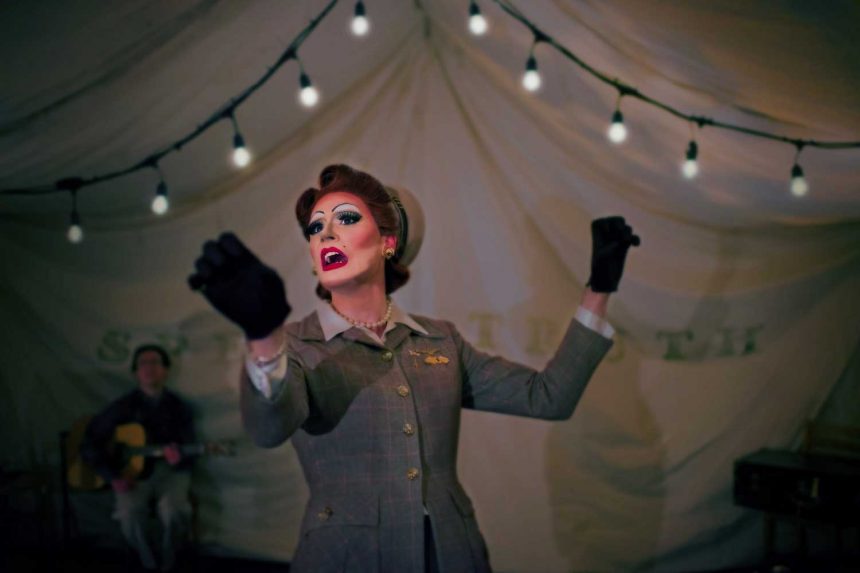 This is everything I want to see, want to hear, want to be. Pearle Harbour’s stage presence is strong enough to cause you to fall in love, or at least deep belief, the moment she enters the tent. This is an interactive and immersive performance that is set in a GI style tent, where she functions as a cabaret host (without cabaret acts), cult leader (the audience as willing followers), puppet show director (staring audience members but, really, only staring Pearle) and songstress. The show is impeccably written and Pearle is able to improv and still keep her knife-sharp wit. The stories Pearle shares range from chilling childhood stories, an alarming contrast to the pure-hearted woman we love, and also provides wholesome morals, the kind you would find in old-time TV. Leaving the tent, you will feel lighter but also want to live by what Pearle taught you: speak truth, right the wrong, follow the way, live pure.

The Chemical Valley Project (B)

Located near Sarnia Ontario, the Chemical Valley has ~63 chemical plants related to oil. With less press than the Alberta Tar Sands and Standing Rock, this area of Canada is killing the Aamjiwnaang First Nations, as well as impacting Sarnians. Broadleaf Theatre’s Chemical Valley Project follows the Gray sisters who chain themselves to the Enbridge pipeline, shutting it down for a few hours. The presentation is done with innovative projection work, using sheets to make multi-layered screens that change in shape and size. Kevin Mathew Wong, the presenter who plays himself, interacts with the projections so at times he is in a protest or talking with individuals on the screen. Because of Wong’s unpolished dialogue, which was endearing, the work doesn’t seem to be in a finished but overall it was refreshing. It will make you want to change the world, while making you feel utterly helpless because of the scope of the issue.

Catacomb (presented by Stopgap Theatre) is filled with narrative risk taking that pushes too far and not far enough, depending on the moment. The storyline is non-linear, moving between the actors being bees, beekeepers, narrator and an addict. At times, the connection between the multiple characters is crystal clear but then quickly becomes ambiguous. In the end, I wanted more: more clarity, more information, more structure, more story, more catharsis. But even though there were so many confusing elements, there was something engaging and relevant that pulled me in. I just don’t know what it was…

Listening to someone eat glass, the crunch of shards between their teeth, is uncomfortable. This was the last moment in Mark Correia’s show Perfection which accurately summarized his show: awkward. Correia mixes magic, comedy and performance under the guise that he is going to provide the perfect show but then it immediately, and deliberately, falls apart through a comedy of errors. It was difficult to believe the character because Correia waivers between an ego maniac who believes he can put on a perfect show and a bumbling fool that lacks the skills to hold an act together. The inconsistency in character made the magic, which at times was quite good, appear insignificant. Also, there were many times when Correia leads the audience on, teasing them that he is going to perform magic and then doesn’t. By his second last magic trick, an impressive straightjacket escape, I had had too many disappointments to be enthralled with the possibility of his escape.

A simplified storyline of Serenity Wild is this: Main character, Amy, has traumatic childhood. Amy has poor relationship, finds BDSM and everything is resolved. It’s reductive and Freudian, assuming that childhood is the reason for kink rather than multiple intersectional experiences, traits and reactions. On one hand, credit should be given for the playwright tackling the difficult subject matter of abuse and sexual assault but on the other I kept asking what the audience should get out of this art work. From my perspective, there is little value in watching the main character essentially be raped and only proceeds to spread trauma. Despite the horrendous handling of the subject matter, some of the scenes were skillfully written, one where two scenes occurred concurrently with Amy moving between each one. The dialogue was flowery but believable in the world that was created.

“Play Of The Day” Ad Auction
If you get a good review (B or better), you can bid to become our Play of The Day (prime advertising spot at the top of the homepage AND on our SummerWorks landing page). Bidding starts at $5 a day. Whomever is the highest bidder as of midnight each night of the festival gets the spot for the next 24 hours or until their bid is beaten (whichever comes second). To bid, just submit a .jpg of your poster to toronto@myentertainmentworld.ca with the subject line “Play of the Day” and be sure to mention your bid price in the email.