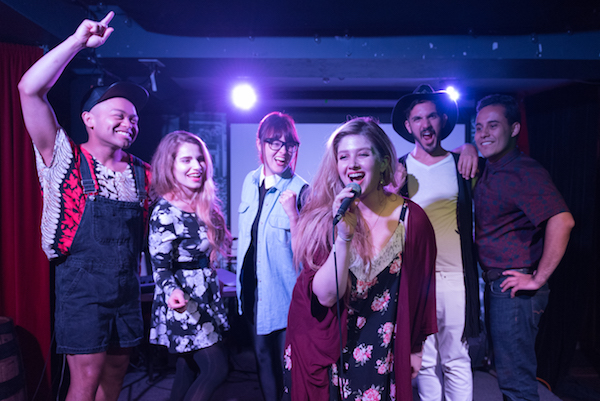 Maddie’s Karaoke Birthday Party (A)
This perfectly cast site-specific musical is the best thing composing team Barbara Johnston and Suzy Wilde have done. The first 2/3 of the show is a perfect in-absentia character portrait as Maddie’s closest friends get up at the birthday party she has neglected to attend and tell stories and sing songs that reflect their relationship with the birthday girl. Johnston and Wilde have crafted a series of smart, catchy original tunes that reflect the style preferences of the characters who’ve chosen those songs for their karaoke performances- club songs, power ballads, frothy pop, etc. Together, the co-worker, the university roommate, the childhood best friend and the current best friend paint a remarkably clear and nicely nuanced picture of the absent Maddie through a series of roof-raising performances. When the birthday girl finally arrives, the play loses a lot of steam as she drunkenly stumbles around and spews the kind of “my life’s not perfect!” insecurities that really ought to be subtext. Kelly Holiff’s voice packs a powerful punch (as does everyone’s in the cast, especially Erica Peck who gives the show-stealing performance) but the book gets lost in its own point-making here and loses what was so fun, subtle, and great about everything that’s come before. With the problems all so tightly focused in one area of the musical, though, this show is one easy fix away from greatness.

In Search of Cruise Control (A)
At first, this very funny solo show seems to be a very funny solo show wherein the affable and charismatic James Gangl recounts funny stories about losing his virginity at a late age and making up for it with adventures he should not have had. Performed with relatability and self-awareness, that alone would have been a pretty great show. But every moment that passes in this 60 minute piece, Gangl pulls his audience in closer to the point where you leave the theatre feeling as if you truly know him. The performance is a marvel of casual vulnerability and emotional insight, all wrapped in a never-not-hilarious-for-a-moment package.

Recall (A)
Fantastic realism is in Seven Siblings Theatre’s mandate. As a company, they’re drawn to texts that use the unreal to comment on reality. Eliza Clark’s grounded sci-fi drama Recall is the perfect script to showcase the company’s point of view. Directed with inspired subtlety by Seven Siblings Artistic Director Will King, Recall’s sci-fi identity unravels slowly, a complex mythology revealed through hints and glimpses in a seemingly “normal” world until the chickens traumatically come home to roost. The set is smartly simple with a single genre showpiece and Parker Nowlan’s lighting and sound design sets the tone perfectly, but it’s the casting that really sets this production apart. Kyla Young and Warren Kang deftly navigate the minefield of playing teenagers as adults and Seven Siblings Artistic Producer Madryn McCabe finally finds the perfect role for her quirky charm in Charlotte the affable but clinical therapist working for the unknown powers that sinisterly be. The usually gregarious Luis Fernandes disappears brilliantly into a quiet, sad, subtle performance and Genevieve Adam anchors it all with a supernova turn as the fierce but flawed mother trying to keep her daughter out of danger. The best thing Seven Siblings has ever done, Recall works on every level.

Weaksauce (A)
If you’ve never seen a Sam Mullins storytelling show, you need to. If you have seen a Sam Mullins storytelling show, see this one. If you’ve already seen Weaksauce (the story of his first love at age 16), see it again. An hour of pure joy and pathos, Weaksauce was the jolt of “oh yeah, that’s what live performance can do” that dragged me through the rest of this exhausting week. From the moment he meandered onto the bare stage, Sam Mullins had the audience so fully tuned in to him that there were literal “oohs”, “ahhs”, gasps and groans. I laughed so hard I cried.

Rough Magic (A-)
Phillip Psutka’s ambitious Shakespeare-approximation writing in this Tempest prequel can feel a bit trite at times but Lindsay Bellaire’s aerial work is the real star here and she delivers more than a few extraordinary moments of shock, awe, and beauty.