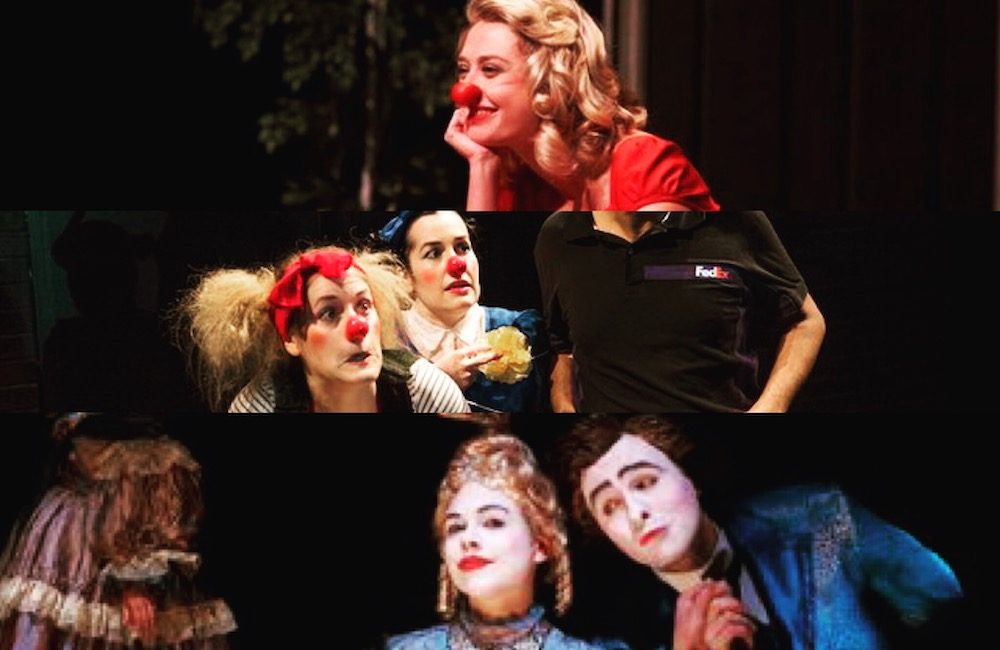 On Stage in TO: Clowning Around

Blind Date (Tarragon Theatre)
I’ve already reviewed this wonderful improvised clown show and its creator Rebecca Northan won the 2015 MyTheatre Award for Outstanding Solo Performance for her work alongside a random audience member who became her spontaneous date for the evening. After a succesful same-sex run at Buddies in Bad Times last year, this touring juggernaut is back at the Tarragon for what Northan warns is likely their last Toronto run for some time, possibly ever. There are three different women playing the leading role of Mimi this time around to double down on the show’s inherent re-watchability. If you’ve never seen it before, I’d seek out a Northan performance if you can because her warmth and insight are second to none. Her best friend Christy Bruce is the second Mimi and she, like Northan, has been doing Blind Date for years so her in-character improv skills are perfectly tuned. This run, I saw the newest version of Mimi- Tess Degenstein, a startlingly beautiful improv vet who cut an intriguingly intimidating figure when I saw her on a Saturday matinee date with a shy sweetheart named Nav. Degenstein’s not as practiced in the role as the other two Mimis but her generous temperament perfectly matches the unique requirements of putting a non-performer at ease when he’s dragged up in front of a crowd to “date” a gorgeous french clown. Go catch one of the last performances of this gem if you can.

Morro & Jasp in Stupefaction (Kabin & UNIT Productions)
Criticizing Morro & Jasp feels icky. I know it’s my job but I can’t help but feel very “no, you cannot have simple joy!” about it. Stupefaction is slow to start, thematically muddled, and ultimately opts out of really examining the most interesting topic it broaches (Jasp’s anxiety and depression, an inspired discovery perfectly in character that would be rich territory for Amy Lee’s considerable acting chops were they to really go for it). But it’s sweet and silly and everyone was just so darn happy spending an hour in these clowns’ company!  Lee and Heather Marie Annis are smart and sensitive writers and performers so I somewhat unfairly always expect the world from them. I want more but I won’t begrudge the rest of the audience their joy.

Confederation, Part I (VideoCabaret in association with Soulpepper)
Playwright Michael Hollingsworth has been chipping away at the reputation of Canadian history for years with his irreverent VideoCabaret series The History of the Village of the Small Huts, 21 plays chronicling Canada from Donnacona and Champlain to The Life & Times of Brian Mulroney. He highlights corruption, idiocy, and hypocrisy and drenches the whole affair in irony, absurdity, and greasepaint. In honour of Canada’s dubious 150th “birthday”, VideoCabaret and Soulpepper have reunited to present four of the Small Huts one-acts- Confederation, Riel, Scandal & Rebellion– smashed together to form Confederation, Parts I & II. The cast assembled for this chapter of the story is a good mix of VideoCab essentials (Richard Alan Campbell, Linda Prystawska, Michaela Washburn) and expressive comedians who seem born to lampoon our founding fathers with clown makeup and wacky wigs (Kat Letwin, Jamie Cavanagh). The shock and awe of VideoCab’s crisp transitions, tight lighting, and awesome projection work is fully in tact, of course, but the actual storytelling of Confederation is a little muddy and thus a little dull. There are too many characters and nuances, perhaps suggesting that each of these slices of history ought to be a full-length play unto itself rather than a one-act. With so many stories swirling all at once, we hardly get to know Louis Riel (the play’s most compelling figure), let alone any of the others. The History of the Village of the Small Huts is at its best with a central character to ground the action (Trudeau is arguably the best example) and Riel is certainly a worthy protagonist, if there was more stage time available to him.

UPDATE: July 5, 2017
Confederation, Part II is much stronger on a storytelling level than its more crowded and convoluted predecessor but it’s less polished and a tad under-rehearsed (surely a by-product of working on it while running Part I). Technical glitches from malfunctioning projections to a moving mustache plagued the matinee performance I attended a few days after opening but the more compelling narrative thrust and stronger emotional content of, specifically, the second half “Rebellion” puts Part II above Part I in my books (Jamie Cavanagh as Laurier delivers a final speech in Part II that might be the most profound 150 contemplation I’ve heard all year). A more diverse cast playing all the parts would ease some of the discomfort of white actors playing indigenous leaders (an especially tricky concept considering VideoCab’s game relies on broad stereotypes) and the precision isn’t up to standard yet but Part II has the heart and wit to be the scene-stealer this season.