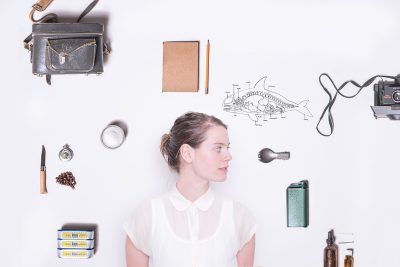 Extremophiles (A)
A delicate, grounded, two-handed story about an anthropologist and her subject in the apocalyptic near-future, Extremophiles is played by a single performer (playwright Georgina Beaty) oscillating between young and old(er), optimistic and weary, open and guarded, visionary and practical with incredible nuance and clarity. The credits are confusing but the combination of Megan Watson (director), Erin Fleck (live visuals/visual design), Patrick Lavender (production designer), Sarah Fairlie (live visual design), and Christopher Stanton (sound design) has created a mesmerizing piece of audio/visual work with simple but enveloping world-building and brilliant water effects that miraculously tie the audience’s heart to an empty splash pool and create a sympathetic third character out of nothing but timing and a squirt gun. Extremophiles is as surprising as it is technically remarkable, rooted uncompromisingly in honest emotion and characters worth caring about. One of SummerWorks’ greatest sleeper hits.

The Unbelievers (A-)
Hannah Rittner’s new play about two women taken prisoner by ISIS is free of complication and rich in complexity. Scenographer Anahita Dehbonehie sets the stage evocatively with a desolate but overwhelming cell that looks assembled from garbage (it’s mostly cardboard), sparsely lit with immense swaths of shadow. There cowers Shadi Shahkhalili as Sanaa, a refugee who’s been there long enough to learn a) how to survive and b) that she doesn’t want to anymore. Shahkhalili’s performance is one of the most memorable of the festival, a captivating blend of battled-back terror and shrivelled hope. She’s joined by Sarah Baskin, strong and compassionate as a Canadian journalist tossed into Sanaa’s claustrophobic world. Horror is abundant in Rittner’s script but kindness and faith make the strongest mark as the two women face the horror together. Director Marina McClure overthinks a bit with opening and closing scenes that are too abstract to fit the grounded tone of the play’s much more effective core but The Unbelievers rests on the women whose story it tells and it’s Shahkhalili and Baskin’s performances that make it work.

This Is How We Got Here (B+)
There are some monologues in playwright Keith Barker’s Northern Ontario rumination on grief and community that are nothing short of breath-catching. Peggy Coffey, James Downing, Deb Drakeford and Martin Julien each get at least one spotlight moment that director Eli Ham smartly plays with great restraint- just a person and their words- and the effect is excellent every time. The scenes in between, however, feel stiff and strained, the long-standing relationships at play (spouses, sisters, best friends) never quite reading as fully lived-in. It’s hard to tell if the awkwardness is in the script or the performances but something doesn’t quite connect to fill out the space between standout monologues.

I’m Not Here (B)
The execution of this absurd three-hander about women in contemporary office culture is spot-on with excellent attention-to-detail from set/costume designer Sabrina Miller, clever tea party staging by director Jen Quinn, and across-the-board cutting and fresh performances from the cast (Shiong-En Chan, Alex Petrachuk and Nadia Verrucci). I loved neither Marie-Claude Verdier’s overly cute script nor Alexis Diamond’s clunky translation (though perhaps the uninspiring dialogue is also Verdier’s fault) and I’m unconvinced that I’m Not Here has anything particularly new to say but the production itself is a strong one.

A Moment of Silence (B-)
One of the noticeable trends this SummerWorks is that the longer plays are being dramatically and consistently out-performed by the shorter ones. This 90-minute drama about a woman who falls asleep for years at a time and wakes up in a totally changed world is the perfect example. It’s slowly paced with dreadful blackout transitions between the extremely short scenes and many a dropped cue, suggesting that more thoughtful design and direction and a more confident cast could easily trim about 15 minutes. Mohammad Yaghoubi’s script has a stirring twist ending that reveals the clever conceit that’s been secretly at play the whole time- the ideas are strong here, no doubt- if only there was less filler and bolder execution.

Plucked (C+)
Rachel Ganz’s dark allegory thinly masquerading as an absurd comedy sports one of the strongest ensembles of the festival, including a brutal against-type turn by Tim Walker and some particularly standout work from Tyrone Savage as tragic simpleton Harley. Set and costume designer Anna Treusch’s contribution works really well on a character level (Harley’s short-shorts are hilarious) and in terms of set functionality (her versatile chicken cages provide one of the production’s most memorable moments). But I hated this play. I gave it a generous C+ because the acting is good and, especially towards the end, there are a few scenes that really fly (director Carly Chamberlain artfully leans on her actors and gives them the silence necessary to craft real moments in between the script), but I hated this play. It’s a shock-for-the-sake-of-shock script that likes to throw around trigger words and grotesque images but lacks the serious insight required to earn such offences. Plucked makes similar points to Daughter but has none of its truth. It offers up vague complaints about the treatment of women and the mentally handicapped but does little to illuminate either issue. For all Plucked’s bluster about the marginalization of women, Sochi Fried– a killer actress defined by her strength- gets to spend almost the entire play in a cage, wrapped in a “fat” blanket, making chicken noises. I suppose that’s the point, but it’s worth noting that the three best roles in the play are the three roles written for (or at least given to) white men. I’m not usually one to kick up a fuss about representation- I should probably fix that- and I’m not offended easily, but this play got me uncharacteristically up in arms. It doesn’t matter how progressive your intentions, you have to examine effect first and foremost and Plucked gives us nothing in return for our offence except yet another good role for Tyrone Savage.